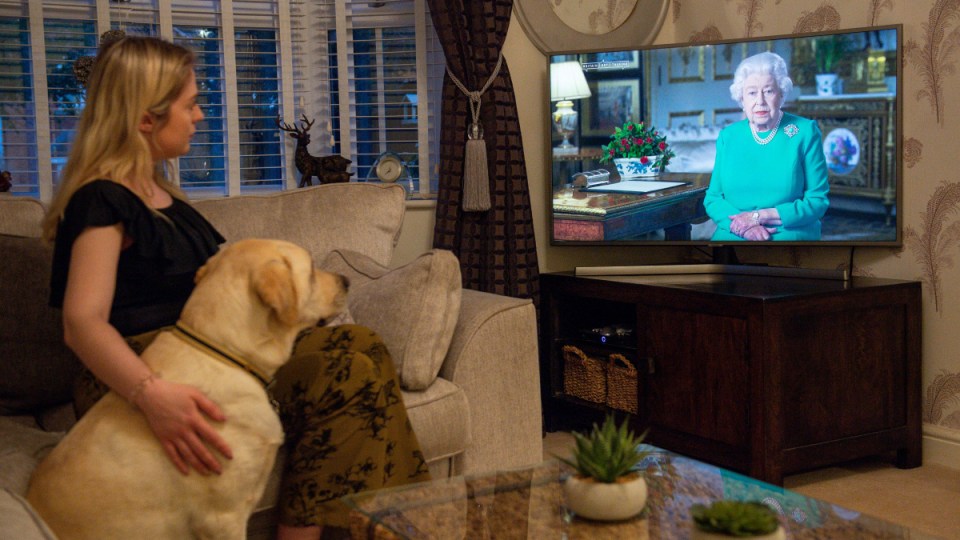 The Doyle family, in the village of Bishop's Itchington in Warwickshire, watch Queen Elizabeth II deliver her address. Photo: AAP

The Queen has invoked the spirit of World War II in a rare speech, declaring “we will overcome” the coronavirus if “we remain united and resolute”.

Britons gathered at television and phone screens on Monday morning (Australian time) to watch the Queen’s address, in which she urged the community to pull together to fight COVID-19.

Less than an hour later, the British government confirmed that Prime Minister Boris Johnson had been taken to hospital as he continues to show symptoms 10 days after being confirmed to have the virus.

Release of information on the PM’s hospitalisation, along with the Queen’s message, are undoubtedly part of a strategy to make it hit home to Britons how serious a threat the coronavirus poses.

Downing Street invited the Queen to record her message as the government grapples with how to convince Britons to stop going outside to sun-bake and picnic in the spring sun.

“While we have faced challenges before, this one is different,” she said.

“This time we join with all nations across the globe in a common endeavour, using the great advances of science and our instinctive compassion to heal. We will succeed – and that success will belong to every one of us.”

The Queen has only delivered such a speech only five times in her 68-year reign – the first as a child during wartime.

I also want to thank those of you who are staying at home, thereby helping to protect the vulnerable and sparing many families the pain already felt by those who have lost loved ones.’’
– Queen Elizabeth

The broadcast came hours after officials said Britain’s virus death toll had risen by 621 in the past 24 hours to 4934. Healthcare workers are preparing for more surges, and authorities believe more people will die this week.

Among those to have contracted the coronavirus is the Queen’s own son, Prince Charles. He has since recovered.

The Queen and her husband, Prince Philip, travelled to Windsor Castle in March, earlier than their usual Easter getaway, as part of protection measures.

For the filming of her historic message, the Queen used one of the castle’s biggest rooms to ensure there was a safe distance between her and the cameraman, who wore gloves and a mask.

She thanked the British public staying at home, adding that in future people would be able to take pride in how they dealt with such a disruption to their lives.

She said the situation reminded her of her first broadcast in 1940, when she and her sister Margaret spoke from Windsor to children who had been evacuated from their homes under sustained German bombing raids.

Her Majesty The Queen addresses the UK and the Commonwealth in a special broadcast recorded at Windsor Castle. pic.twitter.com/HjO1uiV1Tm

“Those who come after us will say the Britons of this generation were as strong as any,” she said.

“That the attributes of self-discipline, of quiet good-humoured resolve and of fellow-feeling still characterise this country. The pride in who we are is not a part of our past – it defines our present and our future.”

Maintaining an upbeat tone, the Queen invoked the words of a World War II song – We’ll Meet Again by Vera Lynn, which became a symbol of hope for Britons during the conflict.

“We should take comfort that while we may have more still to endure, better days will return,” she said.

Britain’s health minister has warned that outdoor exercise could be banned if people continue to flout lockdown rules designed to curb the spread of the coronavirus.

Daily exercise, such as walking, running or cycling, is allowed as long as people maintain social distancing. But that could be about to change.

Health Secretary Matt Hancock was reacting to reports some Britons have been in parks sun-baking in the warm spring weather.

Most people were complying, he said, but if a minority continued to break the rules “we then might have to take further action”.

“What we are doing is being absolutely clear that the current rules must be followed,” he said.

London’s Lambeth Council closed one park on Sunday after it said many people had sunbathed or gathered in large groups there on Saturday.

Mr Hancock said it was “unbelievable” that a small minority would flout government advice on social-distancing.