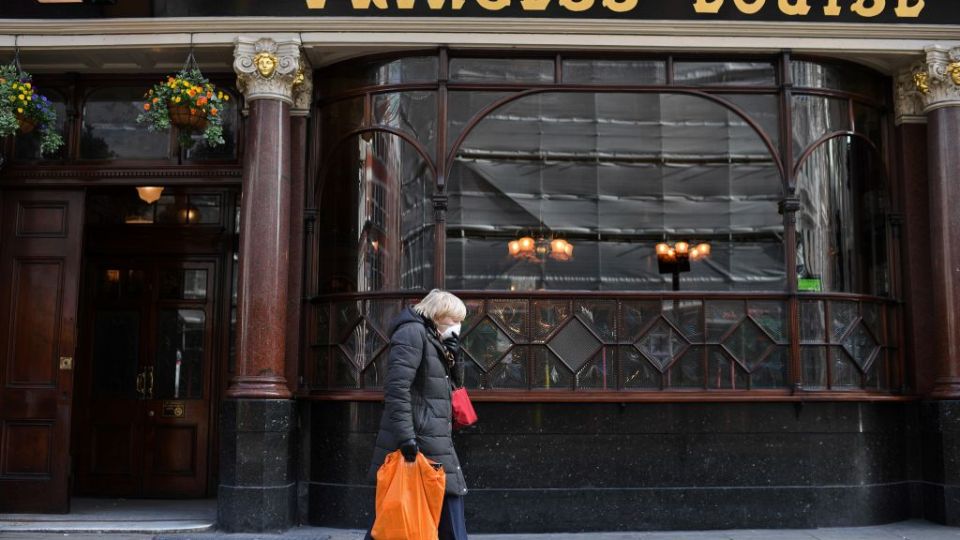 British pubs, cafes, restaurants and other businesses have been told to shut to stem the spread of coronavirus. Photo: Getty

The world is headed for a global recession of “perhaps record dimensions” as the threat of coronavirus forces widespread business shutdowns and jobs losses.

UN secretary general Antonio Guterres issued the warning as major financial cities such as New York went into lockdown, international borders closed and the UK ordered the closure of cafes, pubs and restaurants.

On Saturday morning (Australian time), British Prime Minister Boris Johnson said his government would cover workers’ wages for the first time in history to alleviate the financial consequences of the drastic shutdown.

After initially being criticised for reacting too slowly to the virus outbreak, Mr Johnson told cafes, pubs, restaurants, cinemas, theatres and gyms to close indefinitely to help slow the spread.

“We are telling cafes, bars and restaurants to close tonight as soon as they reasonably can and not to open tomorrow,” said Mr Johnson.

“Though to be clear, they can continue to provide take-out services.

“Some people may of course be tempted to go out tonight, and I say to those people, please don’t.

“The sad thing is today, for now, at least physically, we need to keep people apart.”

Mr Johnson said it was difficult forcing people to discontinue the great British tradition of going to the pub but it was necessary.

“I do accept that what we’re doing is extraordinary: we’re taking away the ancient, inalienable right of free-born people of the United Kingdom to go to the pub, and I can understand how people feel about that,” he said.

“It’s a huge wrench to do that, everybody understands that.

“It’s heartbreaking to think of the businesses that will face difficulties as a result of the measures this country has had to take.”

British finance minister Rishi Sunak said for the first time in history the government would step in to cover wages of businesses hit by coronavirus as part of a stimulus package.

Mr Sunak said the government would give grants to cover 80 per cent of workers’ salaries – up to the value of STG2500 ($5010) a month each – if businesses kept them on staff.

“The economic intervention that I am announcing today is unprecedented in the history of the British state,” he said.

Mr Sunak also said businesses would be allowed to hold on to STG30 billion ($60 billion) of value-added tax, which they would normally pass on to tax authorities over the next three months, in order to help their cash flow.

In the USA, New York authorities have told all non-essential workers to stay home after the state of California invoked the same direction for its 40 million residents.

The number of Americans filing for unemployment benefits surged by 70,000 in a week as economies around the world take a big hit from coronavirus.

Meanwhile a top International Monetary Fund official warned the impact of the global coronavirus pandemic would be “quite severe”.

But a long expansionary period and high employment rates meant the global economy should weather the current shock.

Martin Muehleisen, who heads the IMF’s strategy policy and review department, said in an IMF podcast the main goal for governments should be to limit the spread of the virus in a way that provides confidence that the economic shock will be temporary.

He said banks and governments had already taken unprecedented measures to provide liquidity to markets and keep them functioning, “maybe more than we needed”, but such steps should be co-ordinated internationally to amplify their effect.

“The better organised and the more co-ordinated the health responses to this crisis, the more quickly it may be possible that confidence returns,” he said.

Globally, the death toll from Covid-19 passed 10,000 and infections exceeded 244,000, according to a Johns Hopkins University tally.

More than 86,000 people have recovered, mostly in China, but the pace is much slower than the spread of the virus.

Italian soldiers have been drafted to help control the situation in the country’s northern region a sharp rise in deaths from coronavirus.

The death count leapt by 627 in a day – by far the largest daily rise in absolute terms since the contagion emerged a month ago, taking the national toll to 4032.

The hardest-hit northern region of Lombardy remains in a critical situation, with 2549 deaths and 22,264 cases.

On Thursday, Italy overtook China as the country to register most deaths from the highly contagious virus.

There are 2655 people in intensive care against a previous 2498.