Elderly Australians trapped on a cruise ship bound for Italy fear they will be “left to die” in the coronavirus-ravaged nation where the death toll has surpassed China’s.

Passengers aboard Costa Victoria have been told they will have to disembark in Venice on March 28 after many frustrating weeks “sailing aimlessly” at sea.

Horrified relatives back home fear their loved ones have been issued a “death sentence” by being deposited in Italy and are begging for help to get them out as more countries close their borders.

Family members say up to 240 Australians are on the vessel, with most of them aged over 65 and a number in frail condition in wheelchairs and needing oxygen respirators.

They fear being stuck in Italy without access to medical treatment and unable to return to Australia with flights cancelled and many nations blocking flights from Italy.

Italy has been in extreme lockdown in a bid to curb its skyrocketing death rate which claimed 427 more lives on Thursday (local time), the day after recording its highest single-day death toll of 475 on Wednesday.

Italy has lost 3405 people to coronavirus, overtaking the death toll in China which is at 3249. Italy’s elderly population, high smoking rate and affectionate greetings on the cheek are among the reasons attributed to its alarming fatalities.

“H.E.L.P. We are now stuck on this ship (Costa Victoria) until we reach Italy. What country is going to accept us after being in Italy?” Mrs Martin-Blakey posted online.

“Emirates have cancelled our return flight back from Venice and offered no alternative. Australia is about to close its borders and we can’t get home and we have no knowledge of what will happen to us when we get to Italy.

“We are being forced into the epicentre of covid-19, and we are all healthy on this ship but are now being put at risk.”

Sydney woman Lauren Petrovic said she feared for her mother-in-law  Susan Morgan and sister in law Jackie Morgan on the ship.

“This obviously is a death sentence if they are to be let off here (Italy) without assistance or any avenue to safely come home to Australia,” she wrote on Facebook in a plea for help.

“They will be potentially left to die.

“People are revolting and frustrated, fighting amongst each other and just want to go home but no one is helping and it seems like the Australian government have no idea they are even on the ship.

The Blakeys decided to go on their first cruise to celebrate Mrs Martin-Blakey’s 50th birthday, her 20-year-old daughter Evelyn said.

But less than five days into the trip, things went pear-shaped as countries started closing their borders due to coronavirus and the ship was turned away from several ports in Israel, Jordan, Greece, the UAE, Croatia and the Maldives, she said.

Unable to dock and take day cruises, the passengers were offered credit to spend on board but have been becoming increasingly agitated at the enforced isolation.

They are due to arrive in Venice on March 28 for disembarkation, the captain told guests on Tuesday.

“Please consider that the current situation we are all facing is something totally unexpected we cannot control and was not foreseeable in advance,” a letter from Costa Cruises states.

“Given the delicate situation worldwide the health of our guests and crew is something we cannot compromise and trade.” 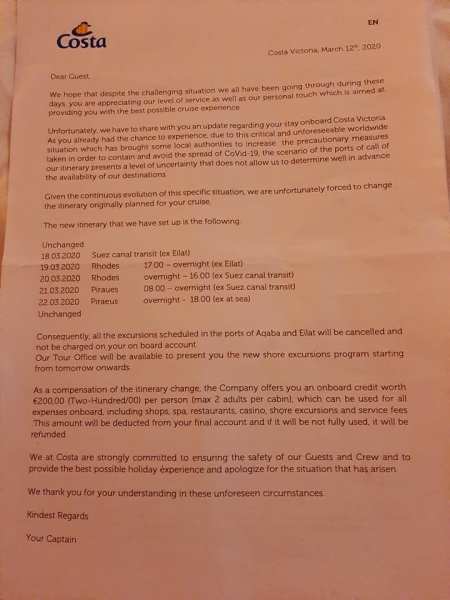 Ms Martin-Blakey called on people in authority to help get the Australians home.

“I want to ensure that Mum and Dad are going to be able to get home within the timeframe.”

Meanwhile an unprecedented ban on all foreign travellers entering Australia will come into effect on Friday night.

All non-citizens and non-residents will not be allowed into the country from 9pm on Friday.

Australians and their direct family members will still be allowed in but must self-quarantine for 14 days upon entering the country.

The Morrison government will on Friday discuss a second stimulus package to cushion the economic blow caused by the pandemic and finalise further advice for the ban on indoor gatherings of more than 100 people.

This guidance will give more clarity to cinemas, theatres, hospitality venues and those organising weddings and funerals.

Social distancing guidelines for public transport will also be discussed, as will additional support for vulnerable Australians including indigenous communities and disability support recipients.

Australia’s energy ministers will hold a teleconference on Friday to discuss stopping late fees for people unable to pay their bills because of the virus.

The Reserve Bank on Thursday cut interest rates to a historic low of 0.25 per cent, while also providing extra support for banks to keep businesses alive.