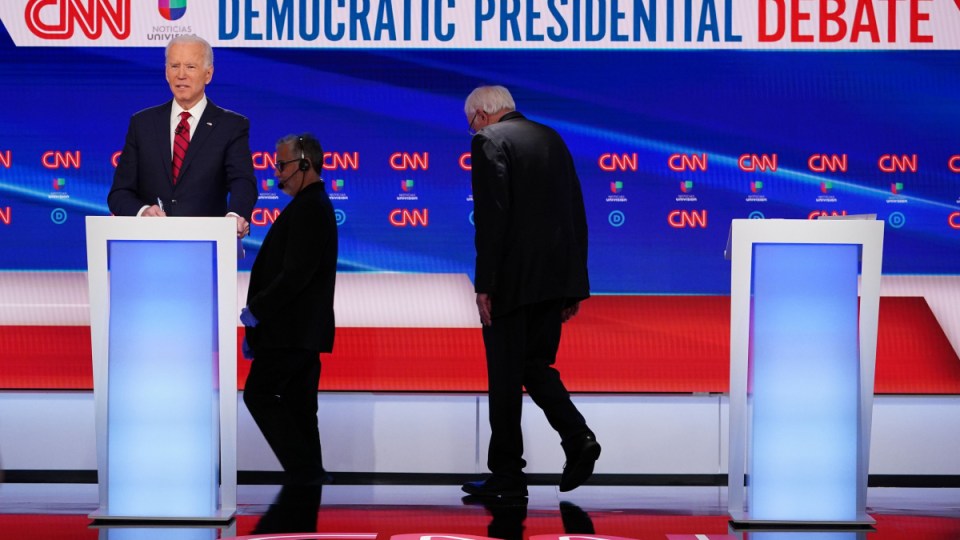 Joe Biden, left, has surged ahead of Bernie Sanders, right, in the Democratic primaries. Photo: Getty

Joe Biden has comfortably won the Florida and Illinois primaries, building on a remarkable surge as he storms toward the Democratic presidential nomination at a time when the United States is gripped by concern about the new coronavirus.

The former vice president’s victories are another blow to Vermont Senator Bernie Sanders, whose early strength has evaporated as African Americans and working-class whites across the country have sided with Mr Biden.

But Tuesday’s primaries (local time) demonstrated the tremendous uncertainty confronting the Democratic contest as it collides with efforts to slow the spread of the virus.

Polls were shuttered in Ohio even as voting moved forward in Florida, Illinois and Arizona, where some voters and elections officials reported problems.

It marked the third week in a row Biden piled up wins after his victory in South Carolina last month revived his once-flagging campaign.

Since then, most of his party’s establishment have lined up behind him as the best option to unseat President Donald Trump in November.

Mr Trump clinched the Republican presidential nomination on Tuesday after a primary victory in Illinois, an expected development considering he had no major competition.

Mr Sanders’ pathway to the nomination has dramatically narrowed, but he isn’t expected to leave the race.

Mr Sanders has staged virtual rallies that his campaign says have been watched by millions, and he used the coronavirus outbreak to promote the need for universal, government-funded health care under “Medicare for All,” his signature issue.

Mr Biden’s campaign is also taking nothing for granted, even though the former vice president has declared that he would select a woman as his running mate.

Officials in Ohio took the unprecedented step of closing polls on Monday, just hours before they were set to open, pushing back the state’s primary until June.

But Illinois, Florida and Arizona, which went ahead with voting even as federal authorities urged people to stay home whenever possible and not to gather in groups of larger than 10.

He sought to head off more states taking similar actions, urging those with upcoming primaries to expand vote-by-mail and absentee balloting, as well as polling station hours, so that efforts to stop the spread of the coronavirus don’t further derail his party’s nomination contest.

Four other states – Louisiana, Georgia, Kentucky and Maryland – have already moved to push back their primaries, and others could follow suit.