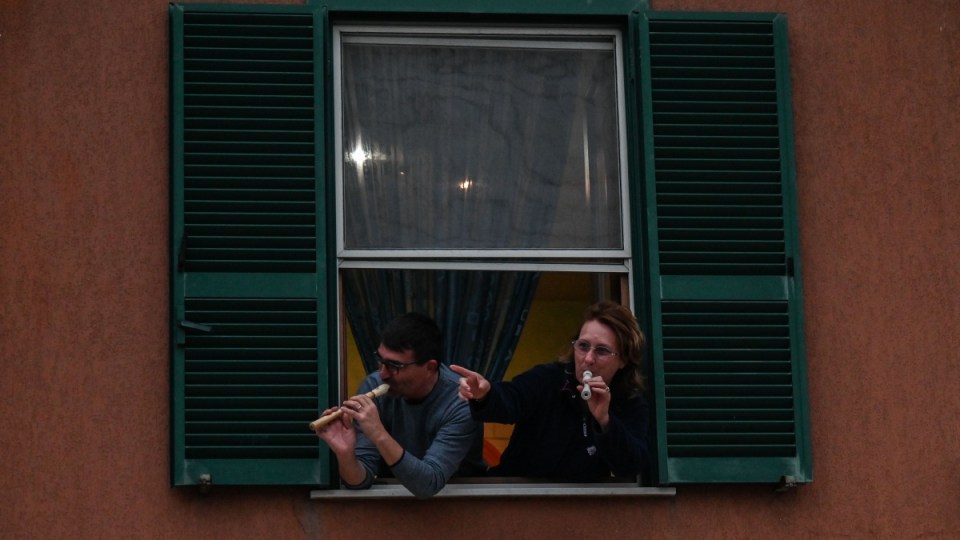 A population of 60 million people are self-isolating in Italy. Photo: Getty

Quarantined Italians have confessed their deep regret over failing to heed coronavirus warnings and have revealed what advice they would give their future selves had they known then what they know now.

The video, which has racked up more than two million views in just two days, features recorded messages from people who don’t want other countries to follow Italy down the same fateful path that caused a nation of 60 million to be confined to their homes.

The caption for the video reads: “It is believed nations like the US, England, France, Spain and Germany are about 9 to 10 days behind Italy in the COVID19 progression. We asked people from all around Italy to record a message to themselves of 10 days prior.”

A woman speaking through a face mask admitted she used to make fun of people wearing face masks.

Another woman’s message stemmed from the regret of not taking her mother’s advice to stockpile on masks and is now stuck at home under mandatory quarantine.

It was only 10 days ago when another citizen recalled being able to attend work meetings, have dinner with friends, go to the gym and hairdresser – just “the usual boring things”.

That’s what many other countries like Australia continue to do – but that won’t be for long if greater precautions aren’t taken to stop the spread of infections and prevent health care services from being stretched far beyond their capacity.

It’s too late for Italy, which is the second-worst affected country after China.

“Nobody can leave their house unless they have a very serious reason,” one person said.

“You’ll realise that even just being able to breathe air in your own house … it’s something you should already be grateful for,” another said.

The Italians shared insights into just how much their lives have changed since their government imposed unprecedented national restrictions to contain the spread of the virus.

“Hospitals are literally blowing up, lots of infections even among young people,” one said.

“There are currently kids our age who are intubated and in intensive care,” the video continued.

The video was created in hopes that people from other countries would realise the best thing for them to do was to stay home.

“If you must go outside, only do it if indispensable,” it continued.

“Because what you’re risking is not a regular ‘flu’.

“The issue is more serious than most of the world believes.

“This is not unfounded pessimism.”