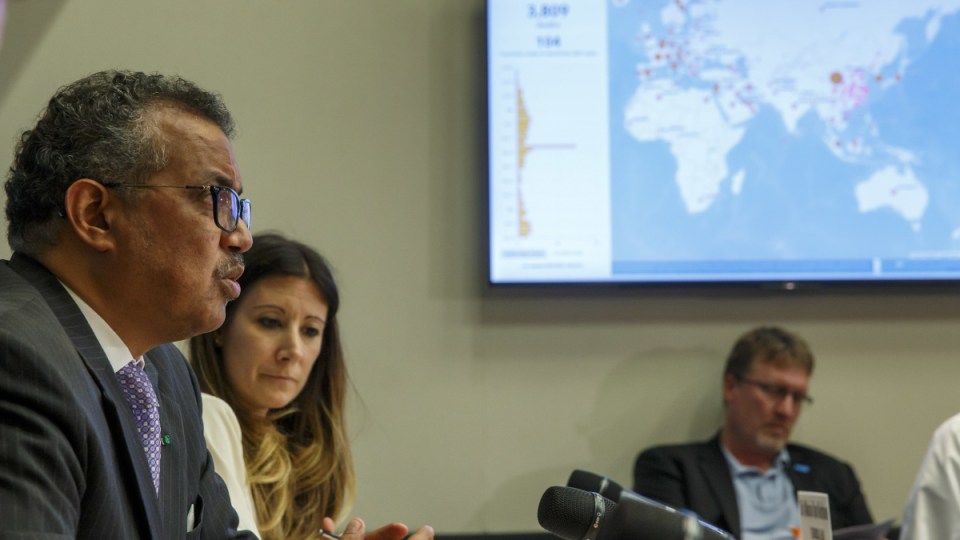 He’s already called it a global public emergency and told leaders they need to consider it a threat worse than terrorism. But the chief of the World Health Organisation fears the daily alarm bells about coronavirus have fallen on deaf ears.

On Thursday morning (Australian time), WHO leaders finally used the label they had been hesitant to attach to the novel coronavirus:

It’s hoped that describing the outbreak that way would shock some countries into action, Dr Tedros said.

The decision to declare a pandemic was not made lightly, he said. But a 13-fold increase in infections outside China in the past fortnight had led to concerns individual countries hadnot implemented serious enough prevention measures.

The spate of new cases in Iran and Italy, the two other countries worst hit by the virus, are just the tip of the iceberg, as other countries will soon be in the same situation, WHO emergencies chief Mike Ryan said.

Dr Tedros stressed cases in China and Korea were declining ‘significantly’ and several countries had demonstrated that the outbreak could be controlled.

But he said other nations lacked the resources to deal with the “crisis”, while others “lacked resolve”.

Dr Tedros said the pandemic declaration was more about semantics than actually changing how WHO was responding. He urged the public not to panic.

“Pandemic is not a word to use lightly or carelessly,” he said.

“It’s a word that if misused can cause unreasonable fear or unjustified acceptance that the fight is over – leading to unnecessary suffering and death.

“There has been so much attention on one word. Let me give you some other words that matter much more and that are much more actionable … these are prevention, preparedness, public health, political leadership – and most of all, people.

We’re in this together to do the right things with calm.’’

WHO interim guidance on critical preparedness, readiness and response actions for #COVID19

A virus outbreak can only be called a pandemic if it has caused illness and death, spread from person-to-person within communities and across the world.

“All countries can still change the course of this pandemic. If countries detect, test, treat, isolate, trace and mobilise their people in the response,” Dr Tedros said.

“We have rung the alarm bell loud and clear,” he said, adding that it was up to governments to “strike a fine balance between protecting health, minimising disruption and respecting human rights”.

“We’re in this together to do the right things with calm and protect the citizens of the world. It’s doable.”

In Victoria, where the outbreak’s emergency status was raised to level two this week, Premier Daniel Andrews said the state control centre had begun coordinating the response from government agencies.

It came after three Victorians were confirmed on Wednesday with coronavirus after returning from the US.

Meanwhile, in NSW, the Lismore and Coolangatta campuses of Southern Cross University reopened on Thursday after an overseas staff member who visited them returned a positive virus test result. Both were shut on Wednesday.

Vice-chancellor Adam Shoemaker said 45 people are believed to have come into contact with or been close to the man while he was in Australia.

Four new coronavirus cases were confirmed in NSW on Wednesday afternoon, taking the state’s total to 65.

NSW Health said COVID-19 clinics will be opened across the state to diagnose patients with coronavirus symptoms.

The number of cases in Queensland jumped to 20 on Wednesday after a man and woman in their 30s returned positive test results. They are in isolation at Gold Coast University Hospital.

In South Australia, two men, one in his 60s and the other in his 70s, were also confirmed to have contracted the coronavirus.

Also, on Wednesday night, a 20-year-old man who had travelled to Hobart from Nepal became the third person in Tasmania to test positive for COVID-19.

Director of Public Health Services Mark Veitch earlier this week said the man did not self-isolate while waiting for the COVID-19 test results.

So far, nearly 125,000 people have contracted the coronavirus and more than 4500 have died.

In Iran, by far the hardest-hit country in the Middle East, the senior vice president and two other cabinet ministers were reported to have tested positive.

Iran has reported another jump in deaths, by 62 to 354, and is behind only China and Italy.

Italy weighed imposing even tighter restrictions on daily life and announced billions in financial relief on Wednesday to cushion economic shocks from the coronavirus.

WHO declares coronavirus is now a pandemic