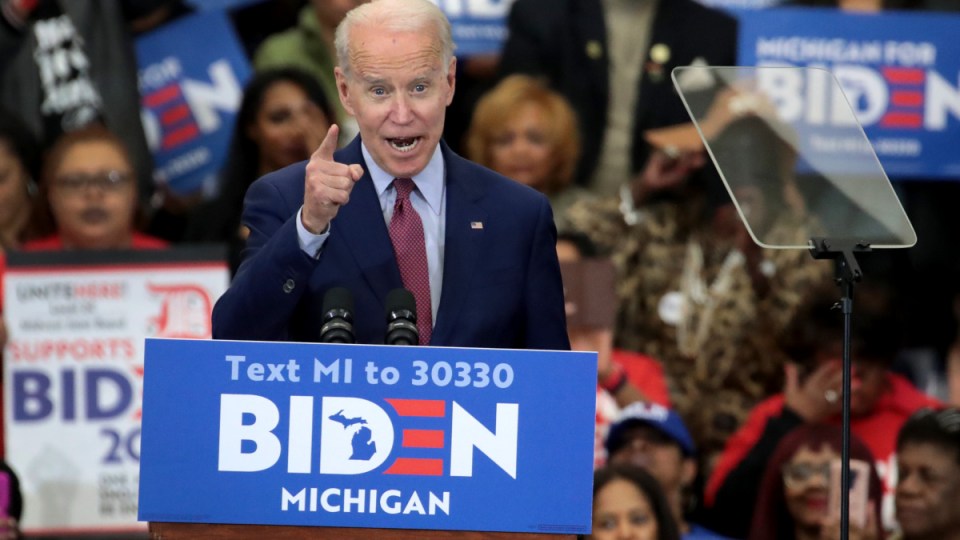 Joe Biden has won the Democratic presidential primary in Michigan, the largest of the six states voting, with 125 pledged delegates at stake.

Bernie Sanders defeated Hillary Clinton in Michigan’s 2016 Democratic presidential primary. Losing the state this year may greatly diminish his chances at the nomination.

Many voters are already looking ahead to November and whether President Donald Trump can again win in the state that, perhaps more than any other, catapulted him into the White House in 2016.

Earlier today, Mr Biden has delivered decisive wins in Missouri and Mississippi, dealing an early blow to rival Mr Sanders on a night when six states were up for grabs.

Tuesday marked the first time voters weighed in on the Democratic contest since it effectively narrowed to a two-person race between Mr Sanders and Mr Biden.

Mr Biden had made a last-minute pitch to the blue-collar workers he hopes will help deliver Michigan’s Democratic presidential primary and build an insurmountable lead over Mr Sanders.

Mr Sanders had been aiming for an upset that would breathe life into his flagging White House hopes.

Mr Biden’s impressive showing in last week’s “Super Tuesday” states, along with a surge of endorsements and campaign donations, has elevated him to frontrunner status, narrowing Mr Sanders’ path to the nomination.

Michigan is also likely to be a crucial battleground in the general election, after Mr Trump became the first Republican presidential candidate four years ago to carry the state in nearly three decades.

Late in the day, both candidates called off planned rallies in Cleveland, Ohio, on Tuesday due to concerns over the coronavirus outbreak, which has rattled markets and prompted Democrats to criticise the Mr Trump administration’s response.

Today’s the day! If you live in ID, MI, MS, MO, ND, or WA head to https://t.co/Hy8C4mIL2M to confirm your polling location and make sure to get out and vote. pic.twitter.com/8QgL6QT4op

The campaigns said they were following guidance from Ohio public health officials.

Until now, Democratic candidates as well as Mr Trump have largely continued to hold large-scale events despite the epidemic.

Mr Biden, who has touted the Obama administration’s decision to bail out the auto industry, made a morning campaign stop at Detroit’s first new auto assembly plant in decades, owned by Fiat Chrysler Automobiles NV.

“Unions built the country,” Mr Biden said, yelling through a bullhorn. “You’re the best damn workers in the world.”

But his visit was marred by a clash with one worker who suggested he planned to confiscate Americans’ guns.

Mr Biden, whose propensity to veer off script occasionally causes self-inflicted wounds, snapped at the worker with an obscenity.

Here is a close up video of the interaction.

Michigan is emblematic of the country’s struggle to retain manufacturing jobs.

Mr Sanders has attacked Mr Biden for supporting international trade deals like the North American Free Trade Agreement, which is unpopular among many of Michigan’s workers.

We need a $15 minimum wage and unions to guarantee a dignified life in America. https://t.co/GgxVUJnUPJ