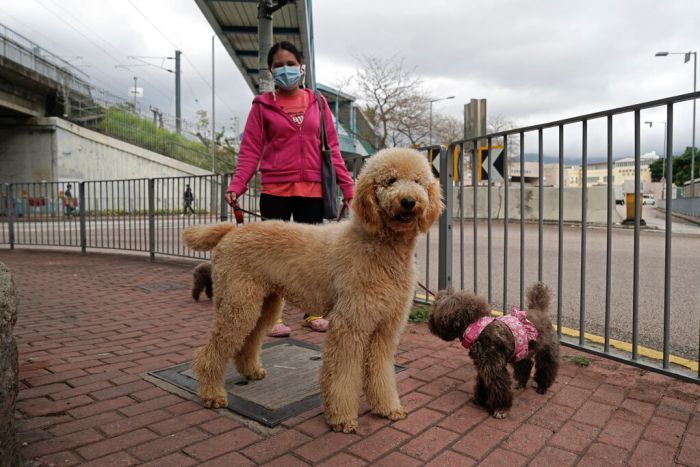 Pet cats and dogs can test positive for the virus but experts say the tests are extremely sensitive. Photo: AP

Hong Kong has quarantined the dog of a coronavirus patient in what could be the first case of human-to-animal transmission, although experts cautioned against pets being potential spreaders of COVID-19.

Last week, the Hong Kong Agriculture, Fisheries and Conservation Department (AFCD) said the dog’s nasal and oral cavities tested “weak positive” for the virus, but its owner said he had not shown any symptoms.

“The department will continue to closely monitor the dog … and repeat the test later. It will only be returned to its owner when the test result is negative,” the AFCD said.

However, it said there is no evidence pets can be a source of infection.

The World Health Organisation (WHO) website states there is no evidence so far that companion pets can be infected with the coronavirus, however, washing hands after contact with pets has been advised.

Professor Michael Wallach from the University of Technology, Sydney believes the method used to detect the virus is extremely sensitive and can pick up even minute amounts of virus, which can be present on any surface.

“The question of whether that virus is causing any infection in the dog or is transmissible between human-to-dog is a different question,” he said.

“You can detect a viral particle on many surfaces or the saliva of an animal, but to conclude an infection is taking place is a big jump,” He told ABC’s The World.

“Everyone should remain calm and not assume that because there’s one test showing one result of one animal on the entire planet that we start changing our attitudes towards our pets. That would be a huge mistake.”

While Hong Kong authorities have concluded pets can test positive for low levels of the pathogen, there is no evidence cats and dogs can pass the new coronavirus on to humans.

However, other disease experts have said it is possible for animals to have the virus but argued they generally do not tend to have symptoms and are unlikely to spread the virus further.

Infectious disease expert Dale Fisher, who chairs the Global Outbreak Alert and Response Network coordinated by the WHO, said some animals have the same receptor for COVID-19.

“They can have the disease but in general, animals are not symptomatic,” Mr Fisher said.

“It’s possible but it’s certainly not proven and I’m sure it’s not going to drive the outbreak.”

“Apart from maintaining good hygiene practices, pet owners need not be overly concerned and under no circumstances should they abandon their pets,” an AFCD spokesman said.

The AFCD and WHO both said pet owners should maintain good hygiene, including washing hands before and after handling animals, their food and supplies and no kissing.

People who are sick are also advised to avoid contact with pets and a veterinarian’s advice should be sought if changes in a pet’s health conditions are detected.