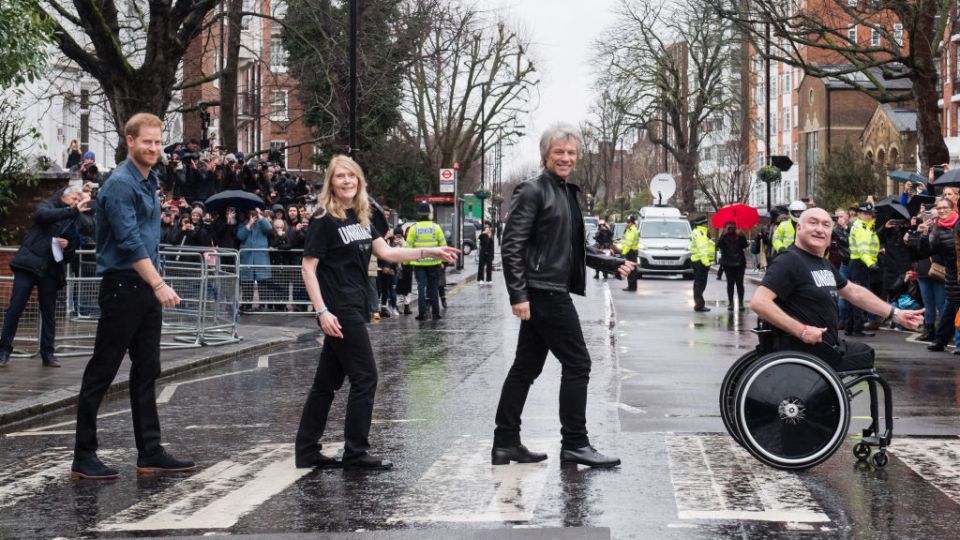 Harry and Jon Bon Jovi and members of the Invictus Games Choir at Abbey Road zebra crossing in London on Thursday. Photo: AAP

Prince Harry is back in London and definitely not on official royal duties as he hung out with veteran rocker Jon Bon Jovi at London’s famous Abbey Road studios for the day.

Greeting Bon Jovi, 57, on the steps of the studio with a warm handshake on Thursday local time, Harry was all smiles, sharing a joke and a chat with the American singer-songwriter before venturing inside for a day in the recording studio.

Harry’s official Instagram account posted a video of Bon Jovi cueing him to begin singing as the pair stood in front of a microphone in the studios, which were used by The Beatles and inspired the title of the band’s 1969 album Abbey Road.

The video posted on Friday ended as Harry and Bon Jovi, both wearing headphones, appeared to be starting to sing.

“I said I’ll give it a shot… Stay tuned for more to come later,” Harry posted.

Harry, 35, founded the Invictus Games in 2014 as an international sporting competition for injured or sick military servicemen and women.

Bon Jovi, 57, had said he planned to re-record his song Unbroken with Harry and the Invictus Games Choir, made up of wounded, sick or injured veterans.

The Invictus Games Foundation released photos of Harry meeting the choir on Friday, and of Harry and Bon Jovi sitting together at a mixing desk and then watching on as the choir, all wearing Unbroken t-shirts, sang.

The choir and Bon Jovi “were rehearsing and recording all day”, it said.

“What a day recording at Abbey Road Studio 2 – a visit from our Patron the Duke of Sussex, a powerful song raising awareness of #PTSD, lyrics written by Jon Bon Jovi and performed with the #invictusgames choir,” the foundation wrote on their Facebook page.

It said Unbroken “will raise funds for the Invictus Games Foundation when released later in March”.

On their still-named sussexroyal Instagram, the reworked Bon Jovi song was chosen to “shine a spotlight on veterans living with PTSD”.

Testing, testing🎙… • Recorded inside Abbey Road Studios, home to The Beatles and other music legends, The Duke of Sussex joins Jon Bon Jovi and the Invictus Games Choir for a special live session in aid of the Invictus Games Foundation. The song being played, called ‘Unbroken’, was created by Jon Bon Jovi to shine a spotlight on those veterans living with Post Traumatic Stress Injury (PTSI), to honour their service and acknowledge the strength of the Armed Forces community. The Duke and JBJ are both strong supporters of the military community, with The Duke founding the Invictus Games in 2014. The Invictus Games Choir, made up of wounded, injured and sick veterans and serving personnel from all services and different ranks of the UK Armed Forces, have come together to use the power of music to aid their recovery. Although The Duke was unable to sing, leaving the vocals to the professionals, the special single that was recorded in Studio 2 where The Beatles recorded 11 out of their 13 albums, and will be released in March in support of the @WeAreInvictusGames. Video © SussexRoyal

Prince Harry and Bon Jovi record together at Abbey Road