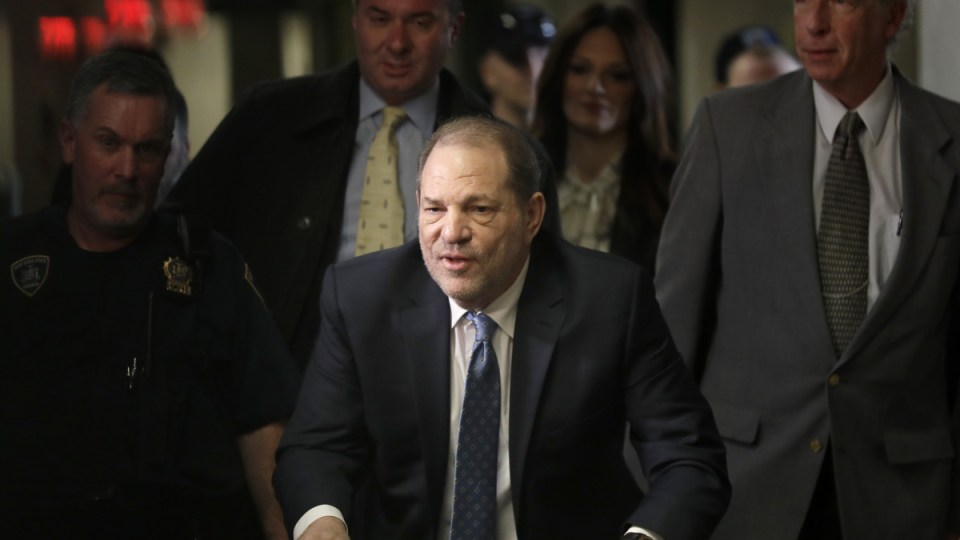 Harvey Weinstein could face up to 25 years in jail. Photo: AAP

After weeks of trial, the jury on Tuesday morning (Australian time) found Weinstein guilty of a first-degree criminal sexual act which carries a maximum penalty of 25 years imprisonment.

They also convicted him of rape in the third-degree – the least severe rape charge which carries a potential sentence of probation to up to four years in prison.

He was acquitted on a further three charges which could have sent him to prison for the rest of his life.

They included two counts of predatory sexual assault and one count of first-degree rape.

After Weinstein’s trial, a judge ordered him to go to jail immediately. He was handcuffed and led from the courtroom.

Manhattan District Attorney Cyrus Vance said jurors had delivered a verdict that “turned a page in our criminal justice system”.

“To the survivors: I owe and we owe an immense debt of courage to you,” Mr Vance told reporters.

Debra Katz, an attorney for one of the victims said: “It will no longer be acceptable in court for anyone to argue that women who were victimized by sexual predators brought it on themselves because they wanted to advance in their careers.”

“The #MeToo movement has educated us all of how pervasive this kind of behavior is and how unacceptable it is. Today, the jury put an exclamation point on that in the most significant way possible,” Ms Katz said outside the courthouse.

In graphic testimony, Ms Haleyi said Weinstein invited her to his SoHo home after she had worked on one of his television productions.

After she arrived, Weinstein backed her into a bedroom, held her down on the bed and forced himself on her orally, yanking out her tampon, Ms Haleyi told jurors.

Weinstein’s second conviction stemmed from accusations that in 2013 he raped aspiring actor Jessica Mann after their relationship became “extremely degrading” and no longer included intercourse.

The case is a milestone for the Me Too movement that inspired women to go public with misconduct allegations against powerful men.

Weinstein faced accusations of sexual misconduct from more than 80 women, with many of the allegations stretching back decades. He had denied every one and said any sexual encounters were consensual.

During the trial, prosecutors portrayed Weinstein as a serial predator who had manipulated women with promises to open doors in Hollywood, coaxing them to hotel rooms or private apartments and then overpowering and violently attacking them.

“The man seated right there was not just a titan in Hollywood, he was a rapist,” Manhattan Assistant District Attorney Meghan Hast said during opening arguments.

Seated at the defence table, Weinstein often appeared impassive, though at times he looked intently at his lawyers when they cross-examined his accusers.

Sopranos actor Annabella Sciorra, told jurors Weinstein came into her apartment one winter night in 1993 or 1994 and raped her.

Though the accusation was too old to be charged as a separate crime, prosecutors offered it to show Weinstein was a repeat sexual offender.

Three other women – costume designer Dawn Dunning, model Tarale Wulff and actor Lauren Young – testified they were enticed into meeting Weinstein for professional reasons and then groped or raped.

Throughout the case, the defence said regret drove the accusers to take consensual incidents and reframe them as crimes.

Weinstein still faces sexual assault charges in California, which were announced just hours after his New York rape trial began, and dozens of women have filed civil lawsuits against him.

Summary of each count: