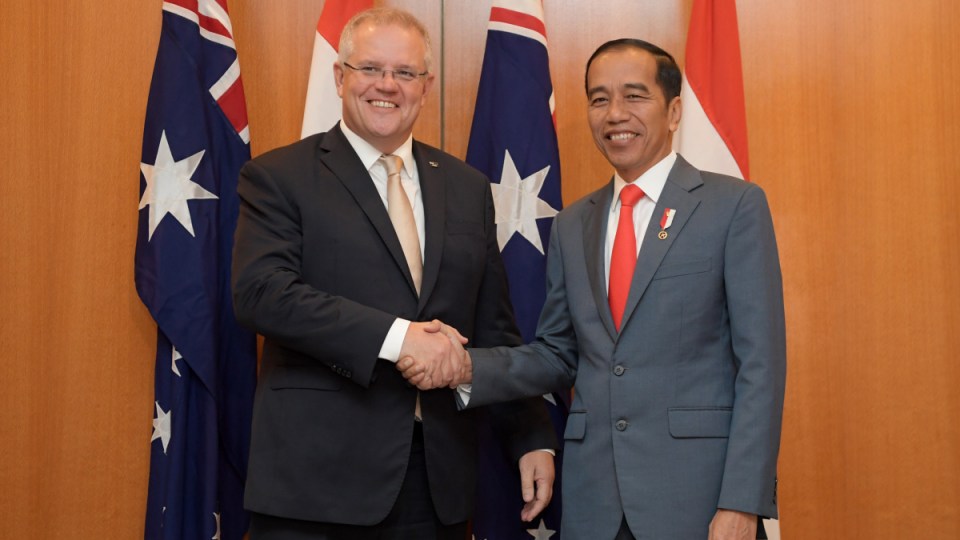 Australia will open Indonesia’s first foreign university campus and consider watering down its travel warnings in a show of unity between the two countries, as an historic trade deal begins.

Indonesian President Joko Widodo and his wife Iriana are in Canberra for an official visit, with a new trade deal to be signed on Monday.

The agreement, passed by the Indonesian parliament last week, is aimed at boosting multi-billion dollar ties.

In a joint press conference, Mr Morrison announced Monash University will set-up Indonesia’s first foreign campus – a move he described as “a very good example of how this is a two-way street”.

The deal was made possible after the Indonesian government finalised regulations allowing foreign universities as part of a push to improve the country’s higher education performance.

“We are pleased that our home affairs minister here in Australia will be engaging with his Indonesian counterpart to proceed to look at how we can simplify and streamline the issues of entry into Australia,” he said.

“We also agreed to reconsider and look at the issues of travel advice into Indonesia, particularly for those areas most frequented by Australian visitors.

“We have also discussed today the many challenges around counterterrorism, foreign terror fighters and counter foreign influence.”

Australia’s travel advisory level for Indonesia is at level two: “exercise a high degree of caution”.

Mr Widodo said the agreement was a significant step forward in the relationship between the countries and within the broader Indo-Pacific region.

“Indonesia hopes Australia can become an important partner in infrastructure investment, as well as education,” he told reporters through an interpreter.

Mr Widodo addressed members and senators in federal parliament, an honour granted to his predecessor Susilo Bambang Yudhoyono in 2010.

The President was given a ceremonial welcome on Sunday at Government House – the official residence of the Governor-General David Hurley – where he was also greeted by foreign secretary Marise Payne.

The Indonesian Parliament ratified the trade deal last week which the President touted as a “gift” for Australia.

Mr Morrison said he and Mr Widodo were both committed to “setting a lively pace” in implementing the agreement, which benefits Australian exporters and consumers.

“I look forward to working even more closely with the president on our shared commitments and challenges across trade and investment, defence and security, counter-terrorism and people-smuggling, maritime issues and education.”

Trade Minister Simon Birmingham said the agreement with one of the world’s fastest-growing economies would be a major boost for Australian farmers through lower tariffs and improved access.

Indonesian goods will be subject to zero tariffs when entering Australia, while tariffs on 94 per cent of Australian goods imported to Indonesia will be eliminated gradually.

The deal is considered important as Australia diversifies its economy and moves away from a heavy reliance on China.

“Obviously it is in our national interest to diversify the economic relationships we have,” Finance Minister Mathias Cormann told reporters.

“The US and China are two very significant economic relations and Indonesia increasingly will become a more and more important relationship into the future.”

The deal’s signing was delayed after Mr Morrison said in late 2018 that Australia was considering moving its embassy in Israel from Tel Aviv to Jerusalem.

Indonesia, the world’s most populous Muslim nation, is a strong supporter of Palestine and warned against the move.