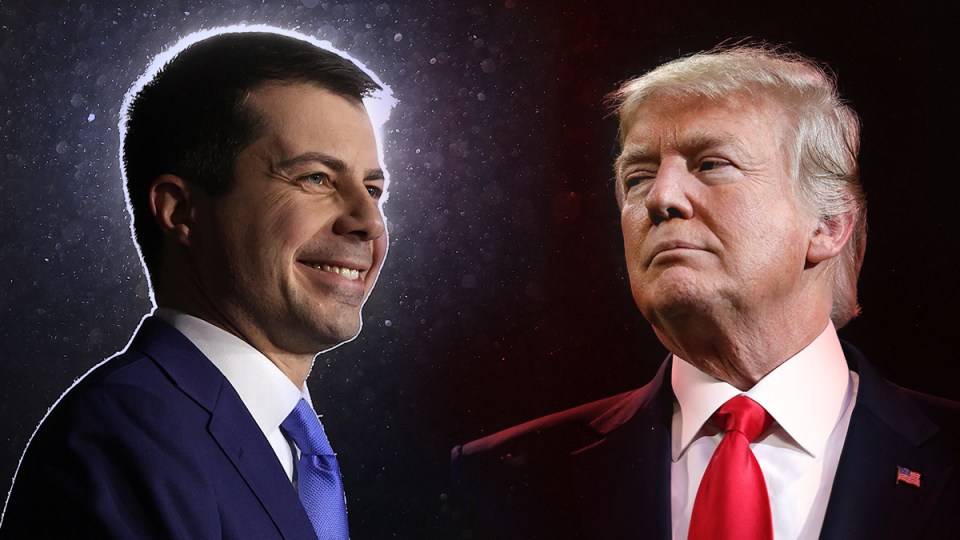 Former mayor Pete Buttigieg is in the running to takeover from Donald Trump as US President. Photo: TND/Getty

Most of us have heard of Joe Biden, Bernie Sanders or Elizabeth Warren. The name Pete Buttigieg may be less familiar.

If this US Democrat doesn’t ring a bell – or his name does but the man still remains a bit of a mystery, read on.

At 38 years old, Mr Buttigieg is the youngest candidate running to be the next president after Donald Trump.

Unlike his major rivals who are all sitting senators (and aged in their 70s), Mr Buttigieg wants to be the first mayor to launch directly from city hall to the White House.

But while he’s lesser known than some of his more high-profile challengers, the midwestern former mayor is proving to be a serious threat.

On Monday, amid a chaotic stuff-up with Iowa’s online voting system, the first round of results showed Mr Buttigieg pulling ahead of Mr Sanders by 1.8 per cent.

The embarrassing delay means the Iowa Democratic Party still hasn’t been able to declare an official winner yet, but Mr Buttigieg has seized his narrow lead as a kind of victory anyway.

In a speech to his supporters, Mr Buttigieg said: “So we don’t know all the results, but we know by the time it’s all said and done, Iowa you have shocked the nation. Because by all indications, we are going on to New Hampshire victorious.”

What happened in Iowa validates our vision that if we called on folks in every kind of community to come together in common purpose, that message can bring people forward and power the campaign to defeat Donald Trump. pic.twitter.com/WJkpzlfQ1f

Pete Buttigieg is a highly educated man of many hats.

He studied history and literature at Harvard College before attending Oxford University on a Rhodes Scholarship.

A former US Navy Reserve officer, Mr Buttigieg spent seven months in Afghanistan during the war as a counter-intelligence officer. He has also worked as a McKinsey consultant.

More recently, the war veteran served two terms as the South Bend mayor in his home state of Indiana from 2012 to 2020.

Another feature that separates Mr Buttigieg from the pack is his sexuality: He is the first openly gay man to have a real crack at the presidency.

I’m definitely the only left-handed, Maltese-American-Episcopalian-gay-millennial-war veteran in the race, but I think profile is just what gets you that first look.”

In 2018, he married Chasten Glezman, a school teacher from Michigan, and speaks publicly about his husband around the country.

Reflecting on his “extraordinary” lead in Iowa, Mr Buttigieg said he hoped it “means something to a lot of people wondering if they fit in, people who are different, people who don’t know if they belong in their community, or in their family”.

However, Mr Buttigieg has also made a point of separating his role as a leader in the LGBTQI community from his candidacy.

He wants people to vote for his policies, not his private life.

While his frankness about being gay is certain to win over the hearts of some voters, others will be harder to please.

On Monday, a video went viral of a homophobic Christian woman in Iowa who wanted to take back her vote for Mr Buttigieg after realising he was gay.

#PeteButtigieg precinct captain in rural Iowa responds to a caucus-goer flipping out upon learning that he has a same-sex partner. It’s a masterclass in patience, persistence, and love. Bravo @nikkiheever #IowaCaucuses #cresco #howardcountyiowa pic.twitter.com/PhX7vRFh8X

“Are you kidding?” the voter said.

“I don’t want anybody like that in the White House. So can I have my card back?”

Iowa caucus precinct captain Nikki van den Heever responded by explaining she wasn’t sure if she could get the voter’s card back, and added that Mr Buttigieg’s sexuality shouldn’t factor into her decision.

What does Pete Buttigieg stand for?

US 2020 presidential election: Who is Pete Buttigieg?