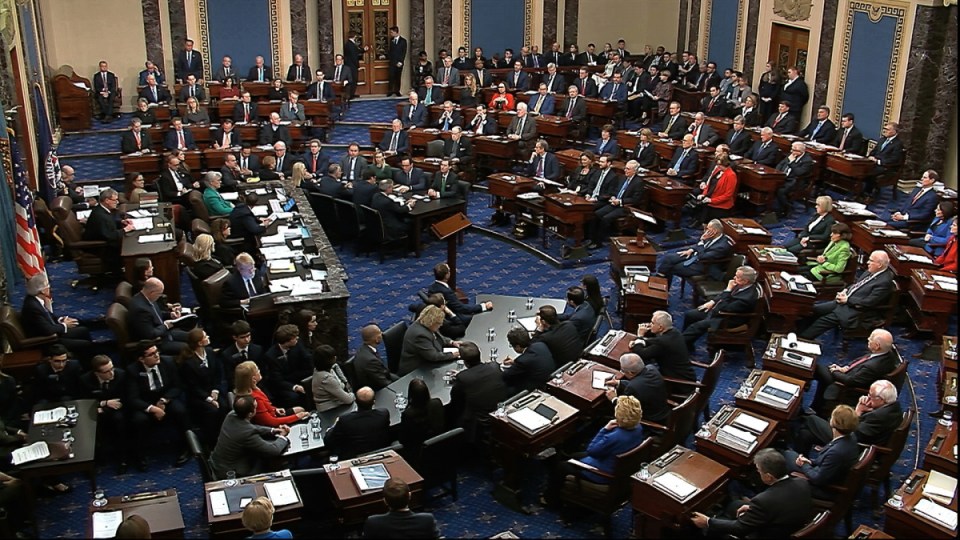 The US Senate votes on President Trump's impeachment. Photo: Getty

The US Senate has voted to acquit President Donald Trump on charges of impeachment.

Mr Trump was acquitted on both articles of impeachment – abuse of power and obstructing Congress – as voting on Thursday morning (Australian time) overwhelmingly went along party lines.

On the first charge of abuse of power, senators voted not guilty by a margin of 52 to 48.

Republican Mitt Romney was the only Senator to vote against his party, saying “guilty”.

On the second charge of obstruction, senators voted in the President’s favour by a margin of 53 to 47.

As a result of the vote, the President remains in office.

The Senate awarded Mr Roberts with a golden gavel to commemorate the historic role he played.

Mr Trump was quick to hit social media after the vote, tweeting an animation that extolled his presidency.

The end of proceedings were a stark contrast with former President Bill Clinton’s impeachment trial.

In 1999, Senators crossed the aisle of the chamber to shake hands with their opposing party members.

On Thursday, Senators appeared to stand on their sides of the room in silence.

“The President has his highest approval rating since he has been in office,” he said.

“I can tell you, as a poll watcher who’s looking at polls, every one of our people are in tough races, every one of them, is in better shape today than they were before the impeachment trial started.

“I’m not sitting here predicting what will be the biggest issue in November, but I can tell you this right now, this is a political loser for them (Democrats). They initiated it.”