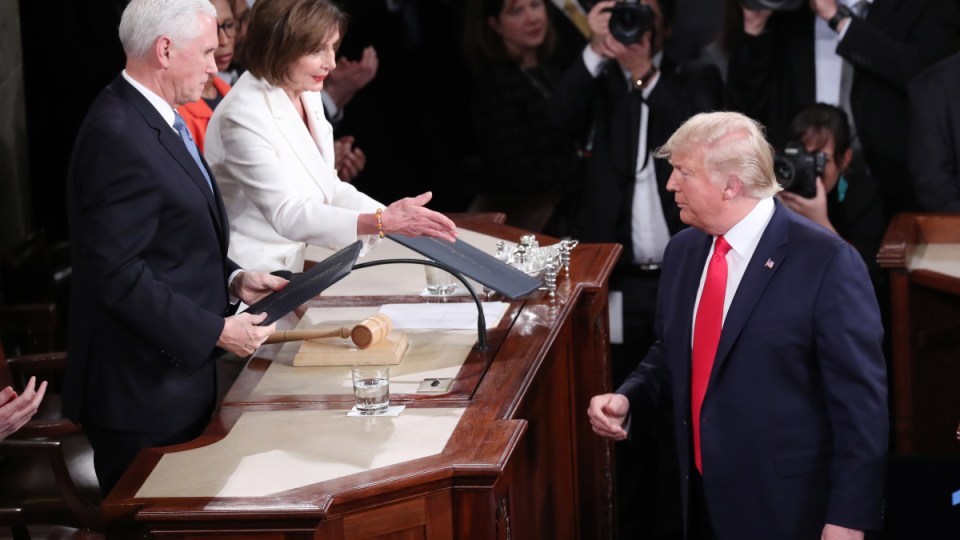 Ms Pelosi and the President have reportedly not spoken for months. Photo: EPA

US President Donald Trump appeared to refuse to shake House Speaker Nancy Pelosi’s hand in an awkward and “unprecedented” start to his State of the Union address on Wednesday.

And, after a lengthy, hubris-filled address by the President, Ms Pelosi raised eyebrows when she ostentatiously ripped up her copies of Mr Trump’s speech.

After approaching the podium at the House of Representatives chamber in Washington DC, Mr Trump handed copies of his speech to Vice President Mike Pence and Ms Pelosi, who were seated behind him, before ignoring Ms Pelosi’s proffered hand.

It was not clear if the President had seen her gesture, but many Washington reporters described it as a calculated snub.

BBC correspondent Nick Bryant, who has covered US politics for decades, called the moment “unprecedented”.

“Anything that Donald Trump says in the next hour or so will be overshadowed in the news tomorrow by his failure to shake the hand of the House Speaker Nancy Pelosi,” Mr Bryant posted on Twitter.

“I’ve never seen that before.”

Watch the apparent snub below:

And as Mr Pence and the Republicans at the gathering cheered the President at the end of the address, camera’s caught Ms Pelosi methodically, and literally, tearing apart his speech before tossing them onto the table in front of her.

The first US president to run for re-election after being impeached, Mr Trump received a strong, partisan welcome, with some Republicans chanting “four more years” while Democrats stood silently.

Mr Trump went on to declare that America was “stronger than ever before” as he delivered his address on the eve of his likely impeachment acquittal.

“In just three short years, we have shattered the mentality of American decline and we have rejected the downsizing of America’s destiny.

“We are moving forward at a pace that was unimaginable just a short time ago, and we are never going back!”

Ms Pelosi, who authorised the impeachment proceedings that charged the president with abusing the power of his office, shares a frosty relationship with Mr Trump.

It has been reported that neither have spoken to each other for several months, and have not met face to face since impeachment proceedings were initiated against the President.

Mr Trump’s 2019 State of the Union speech was largely overshadowed last year by a brief clip in the live broadcast of Ms Pelosi’s seemingly condescending clap of appreciation.

On that occasion, Ms Pelosi limited her reaction during the speech to subtle head-shaking, pursed lips and eye rolls, while often distracting herself by staring at her notes.

As the President concluded his address, the House Speaker rose from her seat and ostentatiously applauded Mr Trump with her hands oddly extended in a manner that screamed of anything but appreciation.

As Mr Trump turned to face her, she appeared to pout and smirk.

The internet applauded Nancy Pelosi's clapping moment at the State of the Union #SOTU https://t.co/OwwwiZ7uBA pic.twitter.com/qtVkKWbcGb

The shock jock, who has been accused of sexism, homophobia and racism throughout his career, is one of Mr Trump’s most relentless defenders and advocates in the media.

Limbaugh revealed to his listeners on Tuesday that he was recently diagnosed with advanced lung cancer.

In his speech, Mr Trump extolled the “Great American Comeback”, claiming credit for the nation’s economic success as Republican members of Congress applauded nearly every sentence of his speech, often leaping to their feet to cheer him.

Many female Democrats, meanwhile, were wearing white as tribute to the suffragettes, while a number in the party were wearing red, white and blue-striped lapel pins to highlight climate change, saying the Trump administration had rolled back environmental safeguards.

Ms Ocasio-Cortez tweeted she would not use her presence at a state ceremony to “normalise Trump’s lawless conduct & subversion of the Constitution”.

Mr Trump is expected to be acquitted of impeachment charges along party lines in the Senate on Thursday Australian time.

The White House had promised an optimistic State of the Union address that would look past the impeachment trial that has consumed Washington, in favour of a recitation of accomplishments and promises.

Mr Trump spent the first part of his speech highlighting the economy’s strength, including low unemployment, stressing how it has helped blue-collar workers and the middle class, though the period of growth began under his predecessor, Barack Obama.