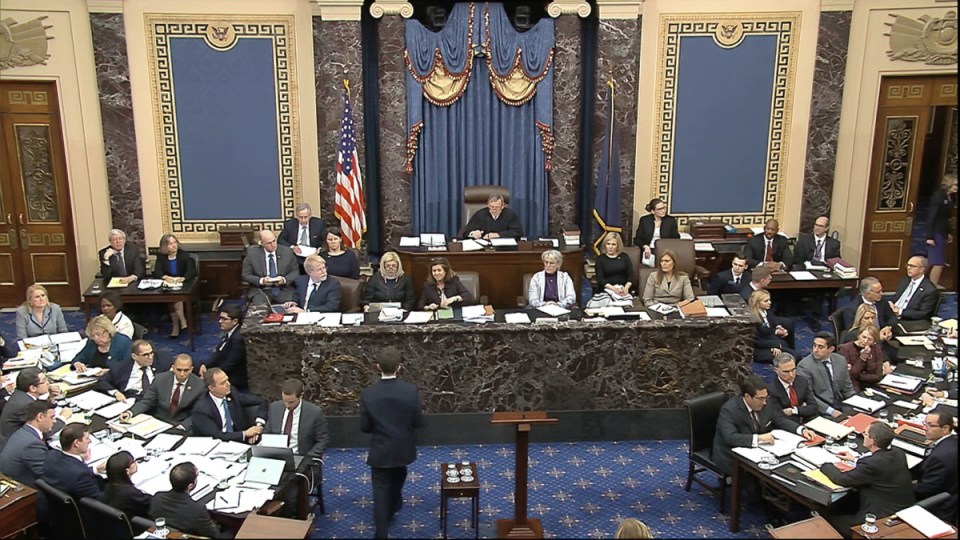 Democrats are optimistic witnesses could still be called in the impeachment trial of US President Donald Trump. Without them, the trial could end as early as Saturday (AEDT). Photo: AAP

Democratic prosecutors and Republican defenders in US President Donald Trump’s impeachment trial have traded barbs in a second day of questioning, with Democrats stressing the importance of calling witnesses such as former national security adviser John Bolton.

Without witnesses, Republicans, who control the Senate, say the trial could end as early as Friday with Mr Trump’s acquittal, which would leave him in office and allow him to claim vindication just as the Democratic Party holds its first nominating contest for the November 3 election in Iowa on Monday.

Mr Trump will hold a rally in the state on Thursday night local time.

Democrats accuse the Republican president of abusing his power by using congressionally approved military aid as leverage to get a foreign power to smear former Vice President Joe Biden, a leading contender for the Democratic nomination.

The Democratic-led House of Representatives approved the two articles of impeachment in December.

On Wednesday local time, US Senator John Barrasso, the third most senior Republican, is bullish about the trial ending on Friday without Democrats achieving their goal of having witnesses called to testify.

On Friday local time, each side was expected to present what amount to closing arguments before the Senate moves to the question of whether to call witnesses.

Democrats are unlikely to muster the two-thirds majority needed to remove Mr Trump from office no matter what happens, but allowing witnesses could inflict political damage on the president as he seeks re-election.

Democrats believe witnesses are essential to shed more light on Mr Trump’s attempt to persuade Ukraine President Volodmyr Zelenskiy to investigate Biden and his son Hunter, who sat on the board of Ukrainian energy company Burisma.

Republican Senator Josh Hawley said Republicans were becoming confident they had enough votes to defeat a motion to call witnesses and that the rules for the trial called for a “pretty quick transition” to a vote on acquittal afterward.

“The general sense in the conference is that it is more likely than not,” he told reporters as he headed into the Senate chamber for the resumption of the proceedings.

Senate Democratic leader Chuck Schumer said he was still optimistic that witnesses could be called.

“I believe Senate Republicans and the president’s team are worried about the vote,” Senator Schumer told a news conference on Thursday morning local time, before the proceedings restarted.

He also indicated that Democrats had a strategy to ensure the trial did not end on Friday, but would not provide details.

Democrats need to persuade at least four Republican senators to vote with them to assure a majority vote in the 100-seat chamber, an effort Senator Schumer has called an uphill fight.

At least four Republicans, Lisa Murkowski of Alaska, Mitt Romney of Utah, Susan Collins of Maine and Lamar Alexander of Tennessee, are seen as potentially on the fence on the issue.

If the vote on whether to allow witnesses is 50-50, John Roberts (Chief Justice of the US) could step in to break the tie.