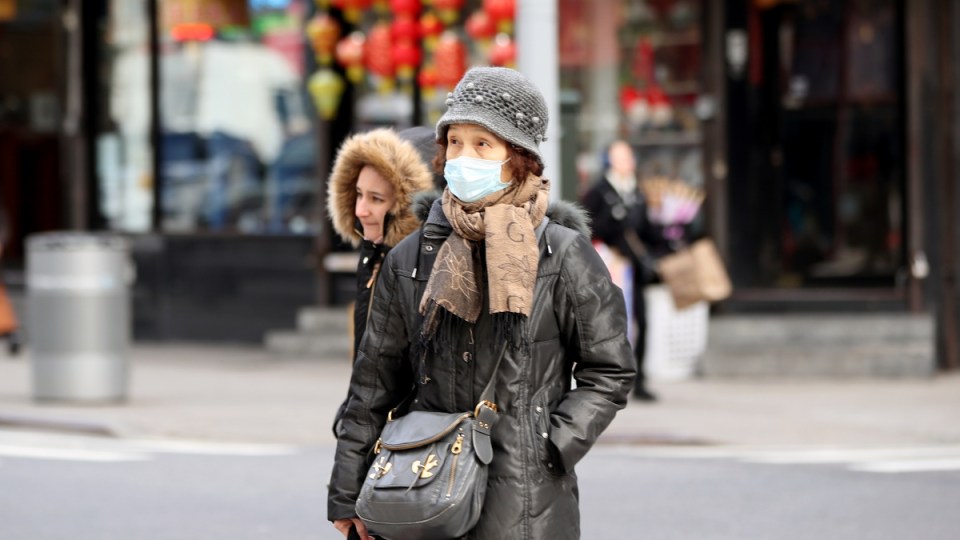 Coronavirus has been declared a global emergency, and people around the world are afraid. But it's translating into anti-Chinese sentiment. Photo: Getty

In Japan, the hashtag #ChineseDon’tComeToJapan has been trending on Twitter. In Singapore, tens of thousands of residents have signed a petition calling for the government to ban Chinese nationals from entering the country.

In Hong Kong, South Korea and Vietnam, businesses have posted signs saying that mainland Chinese customers are not welcome. In France, a front-page headline in a regional newspaper warned of a “Yellow Alert.”

And in a suburb of Toronto, parents demanded that a school district keep children of a family that had recently returned from China out of classes for 17 days.

The rapid spread of the mysterious coronavirus that has sickened more than 7700 people – the overwhelming majority in China, with all of the 170 deaths there – has unleashed a wave of panic and, in some cases, outright anti-Chinese sentiment across the globe.

While public health officials scramble to contain the crisis – the World Health Organisation declared a global health emergency on Thursday – fears over the dangerous outbreak have fuelled xenophobia. And the wave of spreading panic has at times far outstripped practical concerns.

At a time when China’s rise as a global economic and military power has unsettled its neighbours in Asia as well as its rivals in the West, the coronavirus is feeding into latent bigotry against the people of mainland China.

“Some of the xenophobia is likely undergirded by broader political and economic tensions and anxieties related to China, which are interacting with more recent fears of contagion,” said Kristi Govella, an assistant professor of Asian studies at the University of Hawaii, Manoa.

Some of the response to the outbreak can be seen as a rational calculation based on the risk of infection: Airlines are canceling flights to Wuhan, the centre of the epidemic, and other Chinese cities; and conference organisers are asking Chinese delegations not to attend.

Late on Thursday, Italy’s prime minister said that his country had blocked all flights to and from China. And countries like Malaysia, the Philippines, Russia and Vietnam have temporarily stopped issuing certain classes of visas to travellers from Hubei province, where Wuhan is situated, or China altogether.

It is not always easy to discern the boundary between understandable fear and unmistakable discrimination. But some protective measures have effectively amounted to racial or ethnic profiling.

At Bread Box, a banh mi restaurant in central Hoi An, a popular tourist outpost in Vietnam, the owners posted a makeshift sign outside their storefront this month reading, “We can’t service for Chinese, SORRY!” Up the coast, the Danang Riverside Hotel announced Saturday that it would not accept any Chinese guests because of the virus.

Kwong Wing Catering, a small restaurant chain in Hong Kong, announced in a Facebook post Wednesday that it would serve only patrons speaking English or Cantonese, the city’s native language — a tongue distinct from the Mandarin spoken on the mainland. The business has been a vocal supporter of the Hong Kong democracy movement that has risen up in defiance of Beijing.

Public health experts said they understood some of the impulses. “In a sense, it’s a natural reaction to try to distance yourself from a potential cause of illness, particularly when there’s no known cure,” said Karen Eggleston, director of the Asia health policy program at the Shorenstein Asia-Pacific Research Centre at Stanford University.

But examples in both mass and social media have clearly crossed a line. In Australia, The Herald Sun, a Murdoch-owned newspaper, published the words “China Virus Panda-monium” over an image of a red mask. More than 46,000 people from the resident Chinese community in Australia signed a petition that called the headline “unacceptable race discrimination.”

Seriously, who thought this was a good idea for the front page of the paper?
Nope, not cool. pic.twitter.com/VhrjXL3mt4

On Twitter in Japan, where there has long been unease about the conduct of Chinese tourists, commenters have labeled them “dirty” and “insensitive” and have called them “bioterrorists.”

Disinformation is also running high. A much-viewed YouTube video in South Korea claims that a biochemical weapons facility in China leaked the coronavirus, a theory that has gained currency in other corners of the globe. In Australia, a fake post circulating on Instagram warned that shops in Sydney containing items like fortune cookies, rice and “Chinese Red Bull” were contaminated.

The Chinese – and Asians in general – were subjected to similar xenophobic reactions during the SARS epidemic of 2003. But now far more Chinese are traveling abroad: According to the Ministry of Culture and Tourism, Chinese travellers made about 150 million overseas trips in 2018, up more than 14 per cent from the previous year.

China’s lockdown of tens of millions of people, intended to curb the spread of the virus, may be spurring other governments to overreact, said Koichi Nakano, a political scientist at Sophia University in Tokyo.

“The fact that the Chinese government itself is treating people like that would in some ways enable or encourage some of the other people or governments to take equally draconian measures,” Professor Nakano said.

Some governments are trying to ease the panic. In Toronto, politicians, a school board and some community groups have issued public appeals to avoid a repetition of the racism that swept the city in 2003, when SARS killed 44 people there.

“While the virus can be traced to a province in China, we have to be cautious that this not be seen as a Chinese virus,” the school board in the York Region, a suburb with many Asian residents, said in a statement issued on Monday.

“At times such as this, we must come together as Canadians and avoid any hint of xenophobia, which in this case can victimise our East Asian Chinese community.”

Although Indonesia has suspended flights from Wuhan, the governor of West Sumatra, Irwan Prayitno, ignored a plea from a citizens group to reject all Chinese tourists. On Sunday, he personally went to the airport to welcome 174 Chinese visitors from the southwestern city of Kunming.

As coronavirus spreads, so does anti-Chinese sentiment