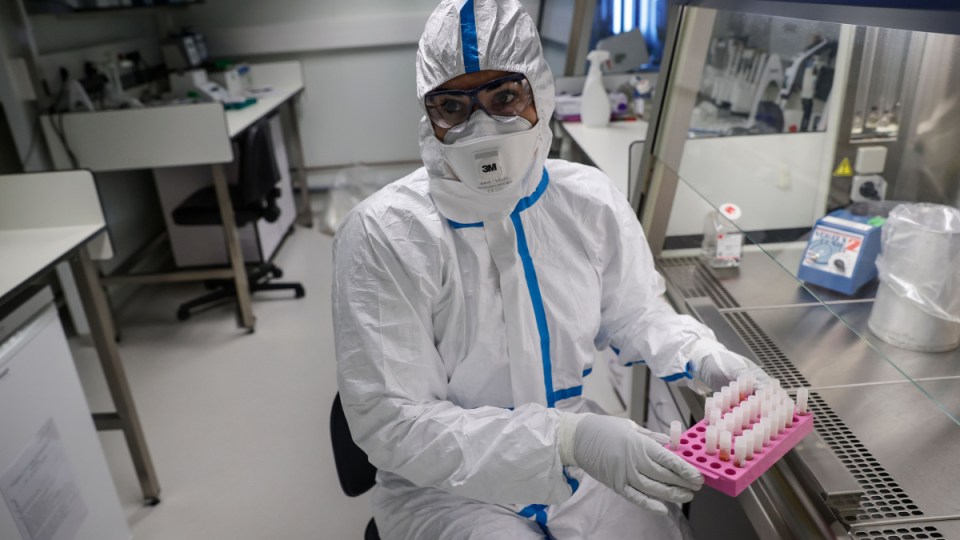 Coronavirus continues to spread around the world, with cases confirmed in at least 100 countries. Photo: Getty

Federal Health Minister Greg Hunt has blasted Queensland’s premier after she claimed a lack of communication from the federal government could hamper local efforts to contain the new coronavirus outbreak.

Mr Hunt and Annastacia Palaszczuk went head to head after more than 1500 more coronavirus cases and 96 deaths were confirmed just hours after the World Health Organisation’s declaration of a global public health emergency.

Since the outbreak, the coronavirus has killed 213 in China, and spread to more than 9300 people globally, with 98 confirmed cases of infection outside the mainland.

A “frustrated” Ms Palaszczuk accused the Morrison government of withholding vital information about a Chinese tour group who had arrived in Queensland on Monday.

They had only recently come back from Wuhan, the Chinese city at the centre of the outbreak and travelled on Tiger Air flight TT566 from Melbourne to the Gold Coast.

“Only the federal government has the details on their incoming boarding card of who they are, where they are staying and their mobile phone contact numbers,” Ms Palaszczuk told Sunrise on Friday morning.

Ms Palaszczuk said she has been left in the dark about the whereabouts of those Chinese travellers.

"I'm frustrated, I'm trying my hardest here, but we need a national effort to deal with this issue right now"

She reiterated her concerns at a media conference in Brisbane on Friday afternoon.

There, Ms Palaszczuk pleaded for national cooperation on the outbreak, even revealing she had written to Prime Minister Scott Morrison asking Canberra to share international flight records that would reveal the locations of tourists.

Australia has nine confirmed cases, two of them in Queensland involving the Chinese nationals who embarked on the Tiger Airways flight to the Gold Coast.

“The Prime Minister has the data and the information of people incoming from these flights from the Hubei province,” Ms Palaszczuk said.

“We do not have that information.

“We would have had a number of planes that have come in from mainland China over the last 1 days. Where are all those people?”

But Mr Hunt tore into the Premier at a later news conference, reading out a list of meeting dates reflecting “daily engagement” with Queensland about the coronavirus outbreak.

He said Queensland was the chair of the Communicable Diseases Network of Australia committee, with state officials present at a string of recent meetings.

And he said the Premier’s own department was part of a national crisis committee hook-up on Thursday.

“If that information has not been provided within the Queensland system to the Premier, I would respectfully urge the Premier to seek that advice from her own system,” he said.

An online dashboard built by @JHUSystems is tracking the spread of the #coronavirus outbreak. The dashboard is updated regularly with data from @WHO, @CDCgov, and others to illustrate how the virus is spreading in China and beyond. #nCoV2019https://t.co/JOhpQ0zCH8

NSW Health issued new advice on Friday about the coronavirus’ ability to spread between humans.

Spending just 15 minutes in close proximity with an infected person could be enough to pick up the respiratory tract illness, which was discovered only 24 days ago.

“A close contact is someone who has been face to face for at least 15 minutes, or been in the same closed space for at least two hours, with a person that was infectious,” the NSW Health website advised.

But, perhaps even more concerning to authorities, it appears infected people could be contagious well before symptoms become apparent.

This means potentially thousands of people could have been exposed to the coronavirus in Australia.

The federal government still doesn’t have China’s permission to evacuate hundreds of Australians from ground zero of the virus crisis and force them into quarantine on Christmas Island.

Mr Morrison is under increasing pressure to bring the Australians home as trapped citizens from other countries are evacuated from Wuhan.

On Friday morning, 200 French citizens boarded a military aircraft bound for southern France from Wuhan. Once back in France, they will go into quarantine for a fortnight.

The US and Japan have already transported hundreds of their citizens out of Wuhan, with a second US flight organised in coming days and Britain also planning to evacuate about 200 European nationals on Friday.

Forty-three airlines across Europe, Asia and North America have suspended or halted flights to China until at late as mid March.

The US state department has warned Americans to refrain from travelling to China altogether.

‘Do not travel to China due to novel coronavirus first identified in Wuhan, China,” the Bureau of Consular Affairs advised on Friday (Australian time).

American investors are growing more concerned about the potential economic impact of the viral outbreak, with shares tumbling at open on Wall Street.

The fall followed an earlier sell-off in markets in Europe and Japan.

The effects of the coronavirus are also expected to hit Australian sectors exposed to the Chinese market, including tourism, education and retail, the hardest.

Investment bank UBS on Friday published a report exploring the implications of the virus. It estimated a two-month halt on China package tours could cost Australia at least $1 billion.

Adding to the potential pain, UBS pointed out that February and March were two of the busiest months for Chinese travellers to Australia, making up about a quarter of annual arrivals.