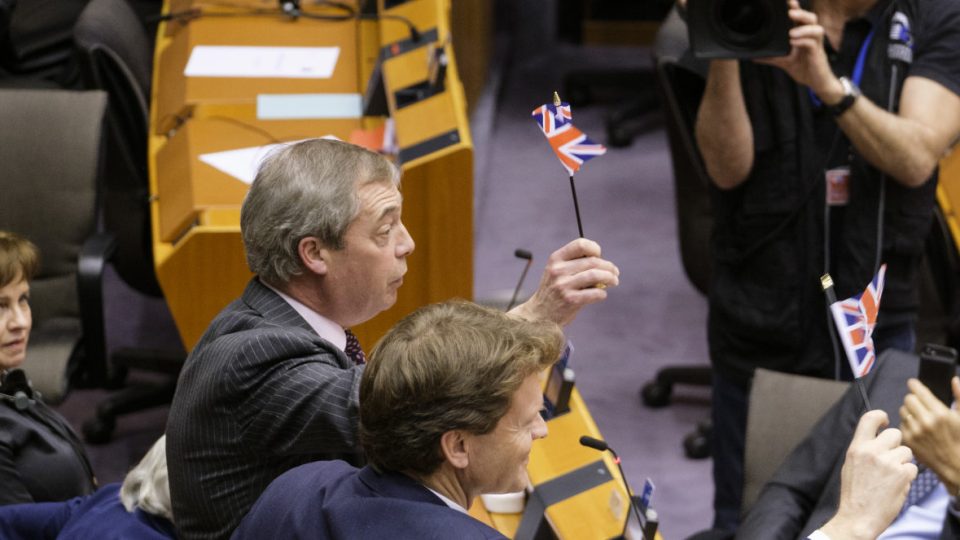 Britain has been given final clearance to withdraw from the European Union after the bloc’s parliament agreed to ratify the terms of Boris Johnson’s Brexit deal.

Members of the European Parliament (MEPs) overwhelmingly supported the deal following a debate in Brussels, voting 621 to 49.

But while the vote was really just a formality to rubber stamp Britain’s deal before it quits the EU on Friday, it was not without drama.

After its departure was set in law, politicians burst into Auld Lang Syne, a traditional Scottish song of farewell.

EU Commission president Ursula Leyen quoted British author George Eliot when saying “only in the agony of parting do we look into the depth of love”.

“We will always love you and we will never be far. Long live Europe,” she said.

His speech was cut off as he and allies began waving mini British flags, breaking parliamentary rules.

After muting Mr Farage’s microphone, EU vice-president Mairead McGuinness said: “Put your flags away, you’re leaving – and take them with you.”

That is exactly what Mr Farage will do. At 11pm British time on Friday –   more than three years since voting to leave – Britons will no longer be part of the European Union.

But bidding “au revoir” to the 73 departing colleagues won’t be the end of EU parliamentarians’ discussions on the divorce.

Many MPs voted in favour of the withdrawal agreement to avoid the disruption and chaos that would ensue if Britain left the EU without a deal.

“If we could stop Brexit by voting ‘no’ today, I would be the first to recommend it,” Belgian MEP Guy Verhofstadt said.

“It is indeed a sad issue … We’re sad to see a country leaving that twice liberated us, twice has given its blood to liberate Europe.”

With a status-quo transition period running only until year-end, fresh talks – covering everything from trade to security – will begin soon on a new relationship.

Chief EU negotiator Michel Barnier told envoys of the remaining 27 members that a loose association agreement – as the bloc has with Ukraine – should serve as the basis for relations, diplomatic sources briefed on the closed-door meeting said.

He said Brussels would seek to continue applying state aid rules to Britain to avert the risk of dumping, and identified fisheries and trade as areas where consequences could be severe if no deal can be clinched.

“We will not give ground on issues that are important to us,” Mr Barnier said, according to the sources.

On his last working day as a member of the European Parliament, Mr Farage said there was “no going back” once Britain left.

“The UK didn’t fit, we’d be better off out,” he said, describing Euroscepticism as a settled view in Britain, where the 2016 referendum was won by a narrow 52 to 48 per cent margin.

While Mr Farage was beaming, his compatriot Jude Kirton-Darling, a socialist member of the Parliament, held back tears.

“It’s probably the saddest day of my life so far. Brexit is something that attacks the very foundation of our identity,” Ms Kirton-Darling said. She plans to stay in Brussels with her Belgian husband.

Tears, cheers and Auld Lang Syne as EU clears the way for Britain to wave goodbye