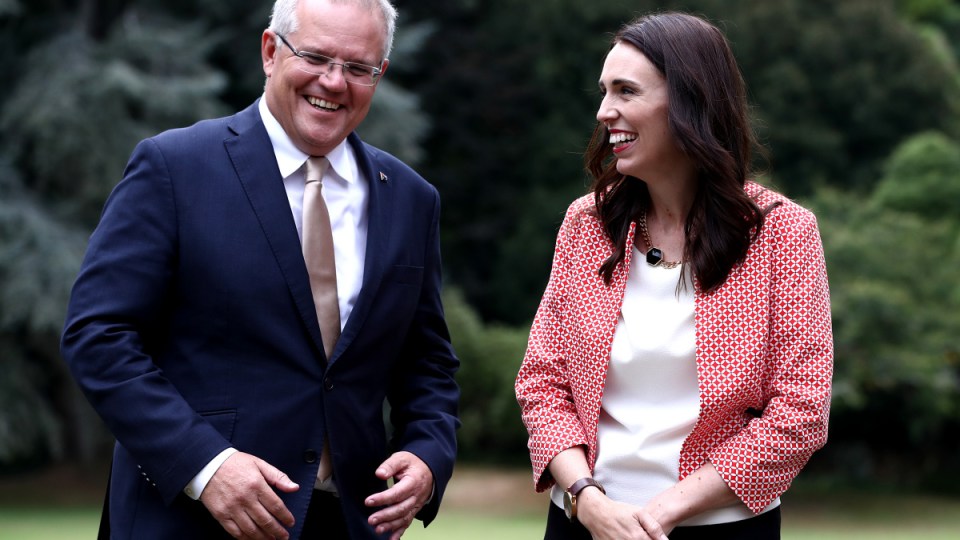 NZ PM Jacinda Ardern called an election on Tuesday – interrupted in her announcement by a surprise call from Scott Morrison Photo: Getty

Prime Minister Scott Morrison has all but hijacked an election announcement by his New Zealand counterpart, Jacinda Ardern.

Ms Ardern called a media conference on Tuesday to announce the poll date but was interrupted by a surprise call from across the Tasman from Mr Morrison.

The interruption failed to fluster the NZ prime minister, who glanced down – in the middle of answering a question – at her silent, vibrating phone.

“There’s PM Morrison, dialling in as we speak,” she said.

What Mr Morrison wanted to say, we will never know. Ms Ardern quickly rejected the call and went on with her big announcement.

Just moments earlier, she had said New Zealanders would have the chance to return or remove her government at a general election on September 19.

In naming a date that is still more than eight months away, Ms Ardern was following an NZ tradition of naming election dates early in the year.

“I will be asking New Zealanders to continue to support my leadership and the current direction of the government which is grounded in stability, a strong economy and progress on the long term challenges facing New Zealand,” she said.

Alternate prime minister Simon Bridges, the opposition leader from the Nationals, will be looking to make Ms Ardern’s coalition the first one-term New Zealand government in more than 40 years.

And the date is…. September 19! Today @jacindaardern announced the date of the 2020 election. Head to https://t.co/VXyHvxxYA7 to sign up for email updates and get involved. pic.twitter.com/4c1WrGbbhj

He faces a tough ask given Ms Ardern’s favourability as preferred prime minister, New Zealand’s relatively strong economy and the electorate’s preference for stability – in stark contrast to the past 15 years in Australian politics.

In 2017, then PM Bill English was all smiles on election night. He declared victory after National won more than 44 per cent of the vote to be clearly the biggest party in parliament.

Eventually, however, Ms Ardern – who had led Labour for just seven weeks at that point – became prime minister after winning over minority parties in negotiations to form government.

Without a landslide result, New Zealand’s major parties are likely to rely on minority parties to govern again.

NZ First, led by Deputy Prime Minister Winston Peters, and the Green party both currently back Labour but will run separate campaigns.

Ms Ardern has pledged to run a “positive, factual and robust” campaign, fighting the spread of misinformation or “fake news” online, and submitting policies for independent costing.

“It’s incumbent on us to deliver the campaign New Zealanders expect and deserve,” she said.

Ms Ardern dismissed the notion that the 235-day election campaign would fatigue Kiwis, saying it was best practice to have a date set long in advance.

“It’s fair and it allows our electoral commission to prepare … we’re all constantly in campaign mode anyway,” she said.

The date – September 19 – puts the poll in the same month as the past two elections, while avoiding school holidays and All Blacks matches.

New Zealanders will also vote on two hot-button social issues – the legalisation of euthanasia and cannabis – in referendums timed to coincide with the general election.