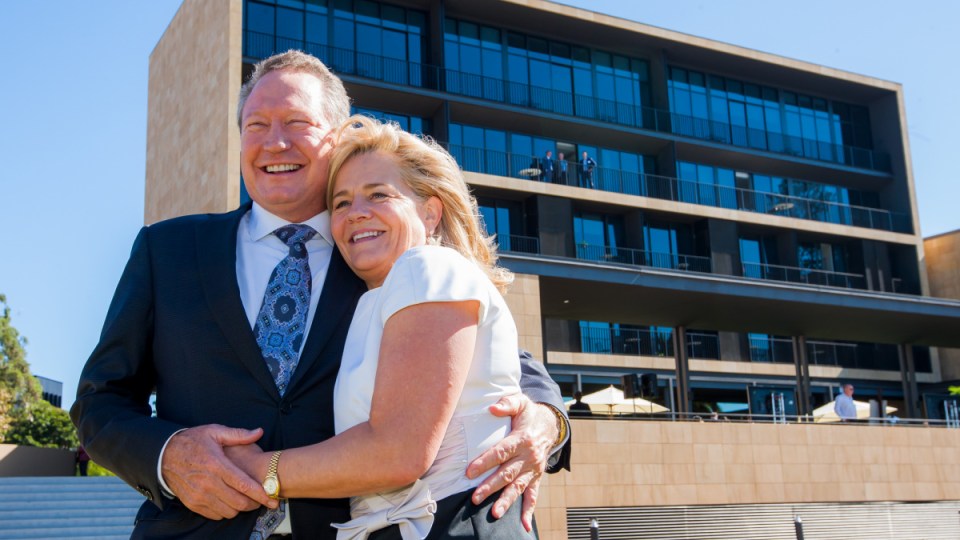 Appeals by the Minderoo Foundation run by Nicola and ‘Twiggy’ Forrest are embarrassing. Photo: University of WA
opinion

I have to admit I was embarrassed, to be sitting in a hotel room in Phnom Penh, Cambodia, and to see an advertisement raising money for the Australian bushfires.

Given Australia’s comparative global wealth and with millions of poorer people in crisis, is it right for Australia to accept foreign donations to ease our pain?

Should we humbly but gratefully accept the millions raised overseas or should we recognise that we can and should pay for ourselves?

Do not take this as me being unsympathetic to Australia.

I understand the tragedy.

Australia is facing one of the fronts of climate change and we are facing a terrible fire season.

Fires are not far from my brother’s farm, but fortunately heading away from him.

But to see us asking for funds from Cambodia?

Back when I worked in humanitarian assistance for the United Nations, we had a saying: “Do not give aid by loudest voice. Listen to the people who cannot speak”.

It was an important saying as people with access to communication could complain loudly and perhaps rightly of their plight, while the most vulnerable would often be trapped without phones or internet and would starve in silence.

While Australians are communicating our plight to the rest of the world, the same cannot be said for those suffering fire in Congo, humanitarian catastrophes in Yemen, natural disasters in Philippines, Puerto Rico and the ongoing refugee crisis affecting at least 65 million people around the world.

Australians are wealthy, allowing us to reach out to other countries and engage their empathy to help us.

We are capable and we have a loud voice with a message of tragedy.

Australia is a rich country and, by some measures, the richest in the world. We are a loud voice. But our voice also has responsibility.

The bushfires in Australia have mobilised the generosity of Australians and foreigners alike to donate to our emergency and its aftermath.

People are rightly concerned and impacted about the millions of hectares being burnt, the carbon being emitted into the atmosphere, the tragic sight of burned koalas and fleeing kangaroos.

Livelihoods, houses and lifestyles are being harmed or destroyed too.

But I believe Australia has the resources and Australia can and should pay for itself.

There are millions of victims of natural disasters and climate in other countries whose voices are not heard.

I am not saying we should avoid collaborative partnerships with foreign fire services to share equipment in the off season.

Countries like Australia, US, Spain and others should continue to share fire-fighting equipment and personnel as our fire seasons are not concurrent. These are sensible partnerships.

I am also not saying that individuals should be left to look after themselves.

Australians are generous people and should donate to Australia. Our communities can and should come together. Those inside Australia should keep donating and helping our own people.

But for those outside Australia I say: “Please donate to disasters where victims cannot afford smartphones, internet or perhaps even enough food.

“Search for those who cannot be heard. Feel for us in Australia, but use our plight to assist those with neither voice, nor actor at the Golden Globes nor tennis player to give up a small amount of his money each ace, nor a musician willing to give up the takings from an Australian concert.”

We should not be using our tragedy to divert funds or take funds from those massively less well off than us – like those in Cambodia.

And to Scott Morrison and the Australian government I have an even stronger message: To them I say, ‘Shame on you’.

Shame that you are not doing enough to help the states.

Shame that you are not providing more funds or taking sufficient action on climate change.

And shame on you for not mobilising the pride of Australia to say to those overseas ‘Thank you for your generosity, but please direct it to those with greater need than ourselves’.

Australia is a rich country. We can and should pay for ourselves.

Andrew MacLeod is a visiting professor to Kings College London, Chairman of Griffin Law, a non-executive director to Australian and US companies, and a former high-level UN official

A bit rich: Should Cambodia and less-wealthy nations donate to our bushfires recovery?