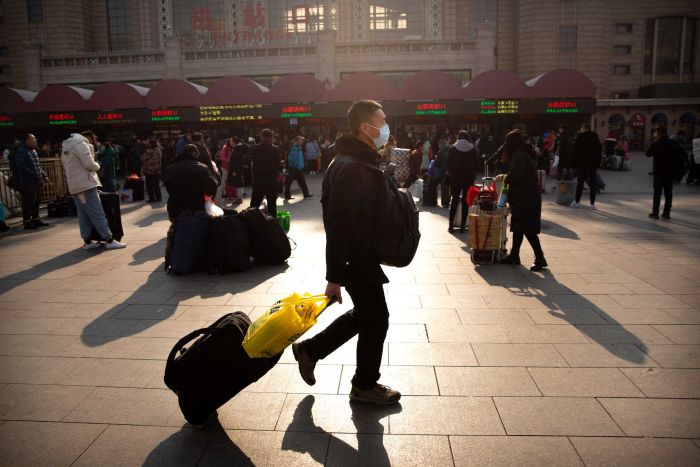 It's still not clear whether the virus can be transmitted from human to human. Photo: ABC

It started as a few cases of pneumonia in workers at a fish market in central China. Now a new virus has the world on alert.

Late last month, doctors began seeing a new type of viral pneumonia – fever, cough, difficulty breathing – in people who worked at or visited a seafood market in the suburbs of Wuhan in China.

Since then, more than 200 cases have been reported and three people have died.

Thailand last week reported two cases of Chinese visitors carrying a strain of the virus, and Japan reported its first case of the infection on Thursday after a Japanese man returned from visiting Wuhan.

South Korea has also reported a case of the virus involving a traveller from Wuhan.

So what do we know about the novel coronavirus, or 2019-nCoV, and how worried should we be?

What is a coronavirus?

The virus behind the outbreak in China is being scrutinised by health authorities and researchers, but coronaviruses are nothing new.

They’re named for the corona, or crown, of surface proteins that the virus uses to penetrate the cells of its host – in other words, the human who’s been infected.

Health authorities are still working hard to figure out how the virus spreads.

At first, it was thought that those who caught it did so directly from the Wuhan seafood market, which the first cases were traced to.

No infections were initially reported in healthcare workers, and the World Health Organisation said the fact that some cases did not seem to be linked with the market meant it could not rule out “limited human-to-human transmission” as a possibility.

China’s National Health Commission has since confirmed the virus has been passed from person to person and has infected some medical staff.

People with the virus usually have a fever, sometimes with respiratory symptoms, Irani Thevarajan, an infectious disease physician at the University of Melbourne, told RN Breakfast.

She said that in the cases where people have died, it has been reported those patients had other medical conditions that may have also played a role.

How similar is this outbreak to SARS and MERS?

Another coronavirus, SARS, started in southern China in late 2002 and spread to more than two dozen countries, killing nearly 800 people.

And MERS has killed more than 850 people since it was first identified in Saudi Arabia in 2012.

SARS was a particularly contagious virus and spread easily between people, said Allen Cheng, an infectious disease and epidemiology expert at Monash University.

MERS was mainly passed from human to human in the healthcare setting.

While the 2019-nCoV has caused deaths, and early identified cases have been severe, people should not be overly alarmed, Professor Cheng said.

“One thing that’s important to know is when we find new viruses, they do testing in cases where people are very sick. So it often looks at first like they’re very severe,” Professor Cheng said.

Many of the people who have been diagnosed since the original cases have not been as severely sick, he said.

What are governments doing to control the spread?

The Department of Health said in a statement it was aware of the outbreak and was watching developments closely, but there was no need for alarm in Australia.

Chief medical officer Brendan Murphy says Australia has well-established procedures to ensure people with illnesses travelling into the country are detected at the border.

Airlines are already required to report passengers who show signs of an infectious disease, including fever, sweats or chills, so sick travellers can be met by biosecurity officers when they arrive in Australia to be assessed.

Some countries use thermal scanners to detect people with fevers, but they probably aren’t a useful intervention at this stage because people who are sick may not have a raised temperature all the time, Dr Cheng said.

“So it will miss lots of people who do have [a disease that causes] fever,” he said.

“And for people who do have fever, especially during the northern hemisphere influenza season, there’s a good chance that it’s not this novel coronavirus.”

Australian state and territory chief health officers will meet this week to discuss developments with this virus.

In the US, passengers arriving from Wuhan in San Francisco, Los Angeles and New York will be checked for symptoms of the infection, according to health news website STAT.

Chinese health authorities are closely monitoring the outbreak and have released the virus’s genetic sequence, meaning it’s now possible to test for it.

Do Australians need to take any precautions?

The World Health Organisation does not currently have any special travel advisory for China.

But Dr Cheng urged people travelling to and from China to be aware of the virus and to seek medical attention if they became unwell.

If they do go to hospital or to see a doctor it’s important to let them know that they have been to China,’’ he said.

“People sometimes don’t volunteer that information because they think it’s not relevant, but in this case it’s really important.”

Australians planning trips to China should keep an eye on the government’s Smart Traveller website for up-to-date information on travel risks.

Why is a new strain of coronavirus making people in China so sick?