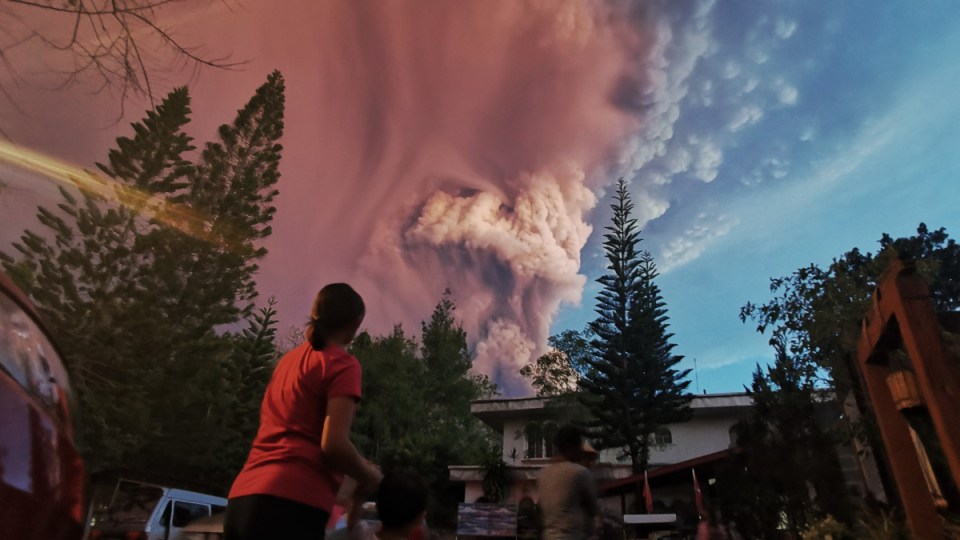 Authorities in the Philippines are warning a “hazardous explosive eruption” could devastate communities in coming days after lava began spewing from a volcano near the capital Manilla.

Already more than 45,000 people have fled to higher ground as Taal Volcano stirs, but it’s expected some 200,000 locals may need to evacuate on Tuesday.

More than 140 volcanic earthquake tremors have been felt across the region.

Flights were cancelled as ash started falling on Manilla on Sunday night, with conditions worsening when a lightning storm hit. Rain has since turned the ash into sludge covering cars, homes and infrastructure and by Tuesday morning at least one person had died on the roads after falling ash impacted visibility for drivers.

President Rodrigo Duterte has promised financial aid for victims and also added that he will go against his doctor’s advice and go ahead with visits to impacted towns.

“I can even eat that ash. And Taal, I’ll pee on that idiot,” Mr Duterte said when asked if he was well enough, according to CNN Philippines.

He added that soldiers and marines were in the area ready to assist as the country prepared for the worst.

Taal volcano, one of the country’s most active, is in the middle of a lake in the Batangas province about 70km south of Manila’s centre. There are concerns the tremors could cause lake waters to rise into a “volcanic tsunami”.

“This is the kind of situation wherein although we have been preparing, it is not enough,” said Batangas provincial governor Hermilando Mandanas.

The volcano’s last eruption was in 1977 following more than a decade of minor activity. Its deadliest was in 1911 when lava and ash spilled for three days, killing more than 1300 people.

With the area now a popular tourist destination, there are fears volcanic activity this week could have a devastating impact.

Hotels are closed and tourists are being warned to find shelter on higher ground.

He added: “We have a trained emergency response team, a 24-hour nurse and clinic, generators that can last for weeks.”

The volcano has begun “weak lava fountaining accompanied by thunder and flashes of lightning,” according to a bulletin from the Philippine Institute of Volcanology and Seismology (Phivolcs).

The alert level has been raised to level three (out of a maximum of five) meaning a hazardous eruption is “possible within hours or days”.

At 4pm local time Monday Phivolcs issued a volcano bulletin describing steam-laden plumes about 2km tall as well as new vents opening up with lava fountains of about 500m.

“The Philippine Seismic Network has recorded a total of 144 volcanic earthquakes in the Taal region since 1:00 PM, January 12, 2020,” the bulletin stated.

“Such intense seismic activity probably signifies continuous magma intrusion beneath the Taal edifice, which may lead to further eruptive activity.”

People were being advised to avoid ashfall which could cause breathing and health problems, especially among children and the elderly.

As tremors shook the area on Sunday, extraordinary photographs captured by locals and tourists evacuation showed volcanic lightning flickering in the column of steam and ash.

Residents described mud falling from the sky and a smell like gunpowder.

Locals and holidaymakers remain on edge, with the Philippine Institute of Volcanology and Seismology (Phivolcs) raising its alert level to 4 out of 5 – meaning “hazardous explosive eruption is possible within hours to days”.

Terrifying yet Incredible video from Cuenca, Batangas – Philippines Taal Volcano Eruption Today! Look how electrifying it is at the end!!!

Phivolcs also warned of possible hazards of a volcanic tsunami and rapid currents of hot gas and volcanic matter that could hit areas around the Taal lake, a popular weekend getaway from Manila.

“Taal is a very small volcano, but a dangerous volcano,” the institute’s head, Renato Solidum, said.

“It is unique because it is a volcano within a volcano.”

Restaurant patron Jon Patrick Yen had an unexpected front row seat to the drama when he went for a meal in Tagaytay.

“We were having lunch when we heard rumbling. We saw the volcano erupting. It rained and some small pebbles fell to the ground,” he said.

“I did not expect to see such spectacle. We just went by to eat.”

Ash fell as far away as Manila, prompting flights to be suspended at the capital’s busy international airport.

General Manager Ed Monreal said the suspension would continue into Monday because there was ash on the runway.

Local school classes were cancelled for Monday and people are being urged to stay indoors.

One of the most active volcanoes in the Philippines, Taal has erupted more than 30 times in the past five centuries, most recently in 1977. An eruption in 1911 killed 1500 people and one in 1754 lasted for a few months.

President Rodrigo Duterte had instructed authorities to move people within the perimeter of Taal out of the danger zone, his spokesman said in a statement.

The ash plume was clearly visible from the nearby city of Tagaytay, a well-frequented viewing spot for the volcano.