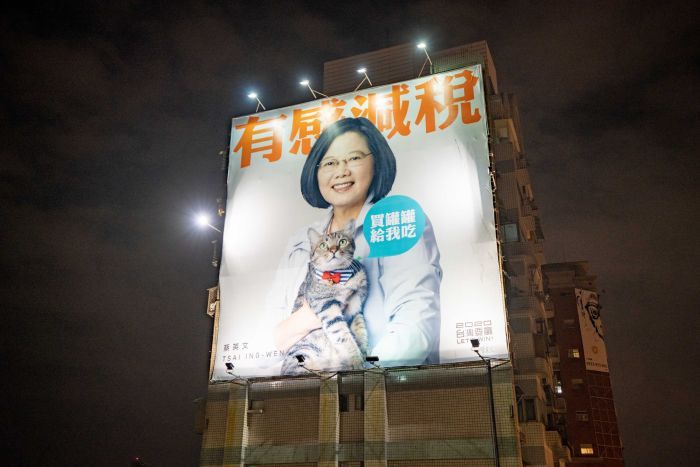 Tsai Ing-wen put her cat front and centre of her campaign. Photo: Getty

Supporters of each candidate gathered in Taipei, the capital, and Kaohsiung, where Han is mayor, to await the official outcome.

The self-governing island is expected to know later Saturday whether Tsai triumphed with her tough stance toward China.

Her rivals have called her a “droopy-tailed woman” who has brought “misfortune” to Taiwan.

Chinese state media mocks her as “wicked”, “superstitious” and inept.

But her supporters say she is “safeguarding” their homeland.

Whatever opinions people have of Taiwan’s President Tsai Ing-wen, there is no refuting her resilience.

Having presided over the island of 23 million people for four years and endured a relentless pressure campaign from China, the 63-year-old looks set to pull off a come-from-behind re-election victory that seemed highly unlikely six months ago.

Struggling in the polls for much of her first term, dogged by a sluggish economy and China’s constant attempts to marginalise her, Ms Tsai’s reformist Democratic Progressive Party (DPP) was hammered in local elections only last year.

And yet she is now favoured to defeat her main rival Han Kuo-yu — a theatrical, populist mayor whose constant attacks on Ms Tsai’s leadership appear to be falling flat, at least according to opinion polls.

“Han’s a strawbag, a clown”, said 50-year-old Sen Zhiwei, who attended a Tsai rally in the northern city of Taoyuan this week.

“Tsai Ing-wen really safeguards Taiwan. She’s very genuine about it, so people are really thankful to her.”

Our votes have power. The power to show us the road to a brighter future & to give us the strength to stand tall as we walk that road. In two days, we must come together for #Taiwan, to safeguard this free & beautiful land that we love. #LetsWin2020 pic.twitter.com/QWOtaTYc1R

Ms Tsai left-leaning party tends to do better with younger voters, and her support for legalising gay marriage has widened the generational split on the island.

Ms Tsai puts her pet cat front and centre of her campaign, and was even mocked by China’s nationalistic Communist Party-owned Global Times tabloid for posting a cosplay “magic girls” avatar to her Facebook page.

And yet the “cute” campaign style belies a much harder edge.

While Ms Tsai comes off as mild mannered and bookish, she’s a hardened and highly experienced political operator who continues to infuriate and frustrate the most powerful man in Asia, China’s leader Xi Jinping.

She caught him off guard when she called US President Donald Trump to congratulate him after his 2016 Presidential victory – a seemingly small phone call but the first time a Taiwanese leader and a US President or President-elect had spoken in more than three and a half decades.

Mr Xi has become increasingly hawkish on Taiwan since Ms Tsai won power four years ago, poaching seven of the island’s remaining diplomatic allies and stepping up a campaign to exclude the Taiwanese Government from international events.

A youth games scheduled for last year was scuttled under Chinese pressure, while Mr Xi has dramatically escalated a campaign to force international airlines and companies to use Beijing’s terminology when referring to Taiwan.

But in response, Ms Tsai has deepened unofficial diplomatic ties to the US, annoying Beijing even further.

The uprising in Hong Kong last year under the One Country, Two Systems model Mr Xi is offering to the Taiwanese has helped Ms Tsai position herself as the defender of the island’s democracy from Communist rule.

Hong Kong’s upheaval has also left Ms Tsai’s opponents in the opposition KMT scrambling to justify their much friendlier position on China, with a recent list of pro-China candidates released by the party triggering a backlash.

Her detractors see her as out of touch and politically opportunistic.

“The mounting tension with China — they purposely antagonised China and hoped Beijing would come back with some reckless actions, which would help Tsai’s party”, he said.

While domestic issues loom large, China’s presence is definitely being felt, with Ms Tsai herself constantly talking about it.

If, like in some recent elections elsewhere, the polls are wrong, China’s leaders will make little attempt to conceal their glee in ousting a woman they’ve long despised for undermining their efforts to expand Communist Party power.

But if Ms Tsai prevails, she’ll prove to be the biggest thorn in Mr Xi’s side.

Disease concern for survivors of Afghanistan earthquake
Steve Smith confirmed as starter for first Test against Sri Lanka
Matildas will be keen to forget 7-0 drubbing by Spain
Upcoming stats will reveal where and how hard rates are hitting economy
Victorian MPs pocket a tidy 2.75 per cent pay raise
Reserve Bank review isn’t a ‘get the governor’ exercise: Jim Chalmers
US orders new retaliatory economic sanctions on Iran
Today's Stories