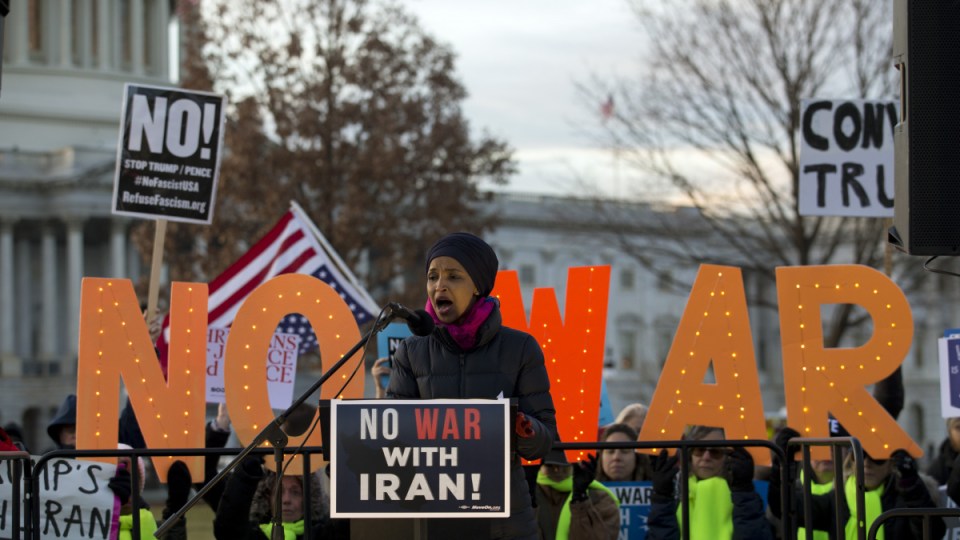 Demonstrato outside the US Capitol during a house vote to measure limiting Mr Trump's ability to take military action against Iran. Photo: AAP

The US House of Representatives has passed a resolution to stop President Donald Trump taking further military action against Iran.

The Democratic-controlled House voted 224 to 194 for the measure on Thursday, mostly along party lines, and rebuked the president for ordering the drone strike that killed a top Iranian commander and raised fears of war.

The resolution will now go to the Senate.

The partisan vote reflects the deep divide in Congress over Mr Trump’s Iran policy and how much of a say lawmakers should have over the use of the military.

Democrats accused Mr Trump of recklessness and backed the resolution, while Mr Trump’s fellow Republicans, who rarely vote against him, opposed it.

“The president has to make the case first, first, not after he launches an ill-advised attack and then comes up with a reason why it was necessary and … legal,” said House Foreign Affairs Committee chair Eliot Engel.

Republicans said Democrats endangered the country by trying to pass a resolution they characterised as an empty political gesture at the start of an election year.

“Instead of supporting the president, my Democrat colleagues are dividing Americans at a critical time,” said Representative Mike McCaul, ranking Republican on the foreign affairs panel.

He said the resolution would “tie the president’s hands”.

The fate of the resolution is uncertain in the Senate.

Republicans hold 53 of the chamber’s 100 seats but at least two – Rand Paul and Mike Lee – have expressed support for the measure.

If passed by the House and Senate, the measure does not need Mr Trump’s signature to go into effect, although Democrats and Republicans disagree whether it is binding.

House Speaker Nancy Pelosi faulted the White House for failing to consult Congress before the drone strike that killed Qassem Soleimani in Baghdad.

“Last week, in our view, the president – the administration – conducted a provocative, disproportionate attack against Iran, which endangered Americans,” she told a news conference.

US officials said on Thursday the government believes Iran accidentally shot down a Ukrainian airliner shortly after Iran fired missiles at two US military bases in Iraq, while Iran was on high alert.

Mr Trump later said General Soleimani was eliminated shortly after landing in Iraq in part because “they were looking to blow up our embassy”.

“We caught a total monster and we took him out and that should have happened a long time ago,” he said.

Mr Trump called Ms Pelosi “Crazy” on Twitter and said he did not need Congress’ approval for military action.

Trump stopped from further military action by US House