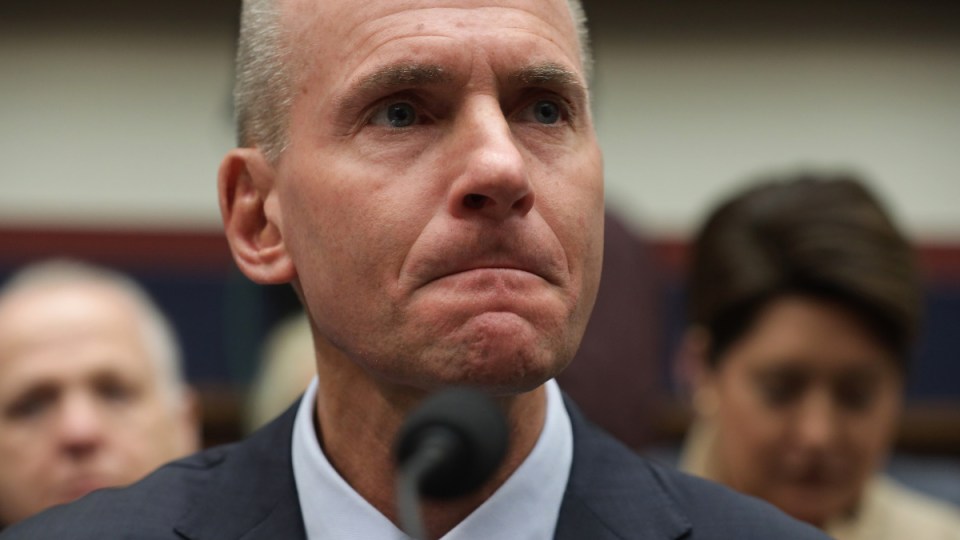 Boeing has sacked its CEO Dennis Muilenburg in a desperate attempt to restore confidence in the airline after two deadly plane crashes.

Despite more than four years in the job, Mr Muilenburg will be replaced by board chairman David Calhoun who will take over the top executive role in mid-January.

Deemed the world’s largest aerospace company, Boeing has been under the microscope since the first of its 737 Max jets crashed in Indonesia in October last year.

The crisis only deepened after a second crash claimed an Ethiopian airline flight on March 10. Both disasters resulted in a total of 346 deaths.

Just a few days ago, Boeing’s Starliner capsule was forced to make its return to Earth after failing to reach a high enough orbit to dock with the International Space Station.

Hoping the change in leadership would regain trust with passengers and airline customers, the troubled aircraft announced that Mr Calhoun will take over as CEO on January 13.

He will still remain part of Boeing’s board once the management shake-up comes into full effect.

“I strongly believe in the future of Boeing and the 737 MAX,” Mr Calhoun said in a statement.

“I am honored to lead this great company and the 150,000 dedicated employees who are working hard to create the future of aviation.”

It’s a significant step forward for the company which has struggled to receive regulatory approvals to resume flying its 737 Max airplanes.

More than 700 Max jets were grounded worldwide after the company temporarily banned all Boeing 737 Max 8 and 9 jets from being used.

This was easily the biggest crisis of Mr Muilenburg’s 34-year tenure at Boeing, where he started as an intern in 1985, rising through the company’s defence and services ranks to the top job in 2015.

The first disaster unfolded on October 29 last year, when a Lion Air airplane repeatedly nose-dived before plunging into the Java Sea off the coast of Indonesia just 12 minutes after taking off from Jakarta. All 189 passengers and crew on board were killed.

Then on March 10, the same type of aircraft bound for Kenya crashed just six minutes after taking off from Addis Ababa in Ethiopia. All 157 people on board died.

The planes in both crashes flew with erratic altitude changes that could indicate the pilots struggled to control the aircraft.

Shortly after their takeoffs, both crews tried to return to the airports but crashed.

The Federal Aviation Administration (FAA) said last week it would not approve the planes’ return to service before 2020.

The company said this month it would stop production of the jets in January.

A change in leadership was ultimately “necessary to restore confidence in the Company moving forward as it works to repair relationships with regulators, customers, and all other stakeholders”, Boeing said in a statement.

“Under the Company’s new leadership, Boeing will operate with a renewed commitment to full transparency, including effective and proactive communication with the [Federal Aviation Administration], other global regulators and its customers,” it continued.

A senior industry source called the wording of Boeing’s statement “brutal”.  Another said the decision was inevitable after spiralling pressures from the 737 production halt to a public slap-down from the FAA, topped off by an embarrassing space launch snafu on Friday.

Speculation that Mr Muilenburg would be fired had been circulating in the industry for months, intensifying in October when the board stripped him of his chairman title.

A Boeing official said the board deliberated over the weekend and they made the decision to fire Mr Muilenburg in a phone call on Sunday.

“Calhoun is respected in the industry,” Aboulafia said on Monday. “But long-term, does he bring the right tool kit? Private equity leans companies out. That’s not Boeing’s problem right now.”

Board member Lawrence Kellner will become non-executive chairman of the board effective immediately, the company said. Chief financial officer Greg Smith will serve as interim CEO during the brief transition period.