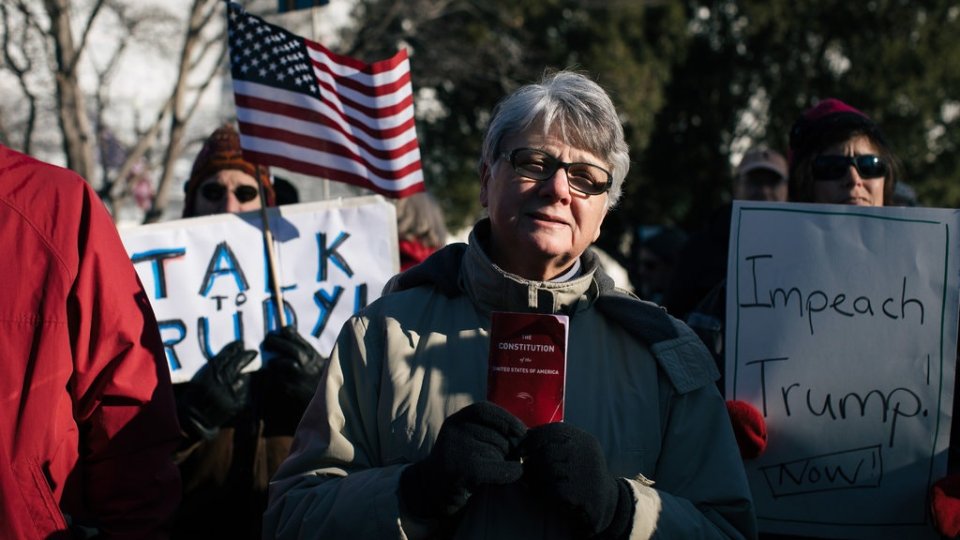 Linda Emerick with a copy of the Constitution during a demonstration in support of impeaching President Trump on Wednesday outside the Capitol. Photo: NYT

WASHINGTON — For the most unpredictable of presidents, it was the most predictable of outcomes. Is anyone really surprised that President Trump was impeached? His defiant disregard for red lines arguably made him an impeachment waiting to happen.

From the day he took office, Mr. Trump made clear that he would not abide by the conventions of the system he inherited. So perhaps it was inevitable that at some point he would go too far for the opposition party, leading to a historic day of debate on the House floor where he was alternately depicted as a constitutional villain or victim.

The proximate charge as Democrats impeached him for high crimes and misdemeanors on party-line votes Wednesday night was the president’s campaign to pressure Ukraine to help him against his domestic political rivals while withholding security aid. But long before Ukraine consumed the capital, Mr. Trump had sought to bend the instruments of government to his own purposes even if it meant pushing boundaries that had been sacrosanct for a generation.

Over nearly three years in office, he has become the most polarizing figure in a country stewing in toxic politics. He has punished enemies and, many argue, undermined democratic institutions. Disregarding advice that restrained other presidents, Mr. Trump kept his real estate business despite the Constitution’s emoluments clause, paid hush money to an alleged paramour and sought to impede investigations that threatened him.

His constant stream of falsehoods, including about his dealings with Ukraine, undermined his credibility both at home and abroad, even as his supporters saw him as a challenger to a corrupt status quo subjected to partisan persecution.

Impeachments come at times of tumult, when pent-up pressures seem to explode into conflict, when the fabric of society feels tenuous and the future uncertain. The impeachment battles over Presidents Andrew Johnson, Richard M. Nixon and Bill Clinton came at turning points in the American story. The time that produced Mr. Trump has proved to be another one, a moment when the unthinkable has become routine and precepts that once seemed inviolable have been tested.

Mr. Trump, in his divisiveness, is the manifestation of a nation fracturing into warring camps and trying to define what America is about all over again, just as it did during Reconstruction, during the era of Vietnam and Watergate and during the rise of a new form of angry partisanship at the dawn of the information age.

As it happened, much of the debate on the House floor on Wednesday proved less dramatic than the times that prompted it. The chamber through much of the day had little of the electricity it had on the day Mr. Clinton was impeached, when the country was bombing Iraq, the incoming House speaker suddenly resigned after admitting adultery and the White House feared Mr. Clinton would be forced to follow suit.

Instead, the debate over Mr. Trump seemed more like a scripted program with everyone playing their assigned parts, each side sticking to its talking points, speaking not to the half-empty galleries but to the country at large. Words and phrases like “no one is above the law” (used in some form or another 60 times) and “sad day” and “sham” (29 times each) were among the favorites. Only when the votes neared in the evening did the chamber fill and the energy level rise.

But at points, the lawmakers touched on the larger ramifications, reflecting the broader forces at play. For the Democrats, there was a sense of mission, of reining in an outlaw president who threatened the pillars of the republic. For the Republicans, a party once wary of Mr. Trump but now in full embrace, it was about stopping what they insisted was an illegitimate, unconstitutional attempt to reverse an election victory.

The country, of course, was being torn apart long before the clerk called the roll, just as it was in the Johnson, Nixon and Clinton eras, but the divisions were surely widened by the time the gavel came down.

In Johnson’s case, his impeachment in 1868 was not really about his decision to fire his war secretary in violation of a later-overturned law but about what kind of country would emerge from the Civil War. A Southern white supremacist who ascended to the White House after Abraham Lincoln’s assassination, Johnson wanted to ease the Confederate states back into the Union with little change while his Radical Republican opponents sought a new order guaranteeing equal rights for freed slaves.

More than a century later, Nixon’s near-impeachment in 1974 was the climax of a decade of social upheaval — the assassinations of John F. Kennedy, Robert F. Kennedy and the Rev. Dr. Martin Luther King Jr., the civil rights movement, the Vietnam War, women’s liberation, the sexual revolution and finally the Watergate scandal. With the country roiling, Nixon resigned before the House could vote on articles of impeachment.

Mr. Clinton’s impeachment in 1998 came in a time of peace and prosperity, but it was nonetheless a moment of transition when the first baby boomer had arrived in the White House along with a history of philandering, drug use and draft avoidance that offended traditionalists. The emergence of Speaker Newt Gingrich’s take-no-prisoners Republicans coincided with the opening of the internet era that would eventually Balkanize America.

“It may be that impeachment is a fairly blunt instrument for dealing with periods of intense partisan division,” said Eric Foner, the noted Reconstruction historian whose latest book, “The Second Founding,” was published this fall. “In a way, we’re in another moment where the fundamentals of the system are being fought over, not just whether the president stays.”

For some, his election was the revolt of everyday people against coastal elites, what Mr. Winik called “the age of the forgotten man.” Empowering a rich showman to take on the system, they made him the first president in American history without a day of experience in either government or the military, gambling that he could do what most or all of his 44 predecessors had not.

A President Impeached, and a Nation Convulsed