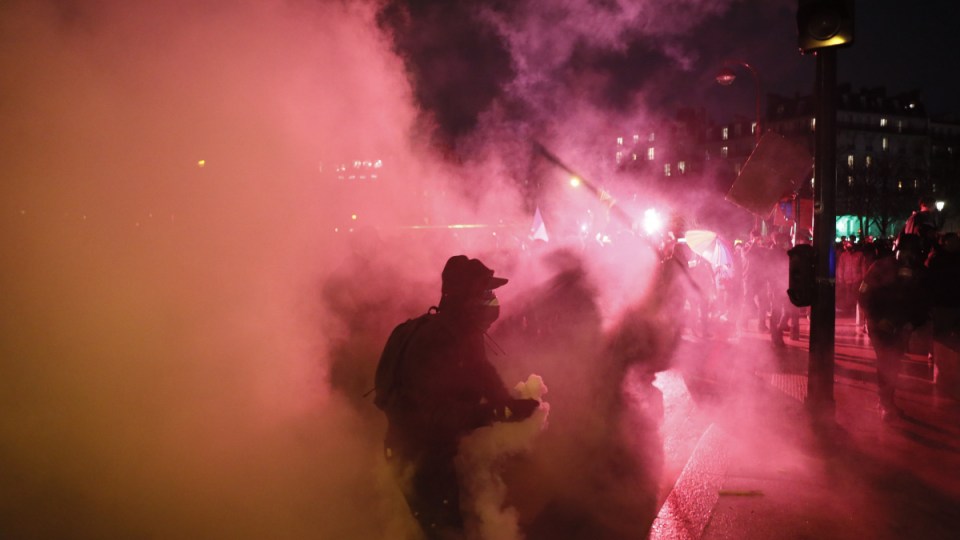 Thousands took to the streets of Paris over proposed pension reforms. Photo: Getty

French trade unions crippled transport and shut schools but failed to achieve the big surge in support they had sought to increase pressure on President Emmanuel Macron to ditch a planned pension reform by Christmas.

All big unions organised marches on the same day for the first time in almost two weeks of nationwide protests, with union chiefs hoping to regain faltering momentum.

But the interior ministry said only about 615,000 people nationwide answered the union leaders’ call. This was a significant decline since the first big day of action on December 5, which had brought 806,000 on to the streets, though 76,000 people marched in Paris, more than the 65,000 tallied on December 5.

There was no immediate reaction to the fall in numbers from the union leaders, who oppose Mr Macron’s plans to streamline the Byzantine state pension system and prod people to work until 64, instead of the legal retirement age of 62.

Police also charged a group of protesters in Paris who ignored an ultimatum to disperse and threw Molotov cocktails at police, a Reuters reporter at the scene said.

“We want social justice,” said Veronique Ragot, 55, a sub-editor at a publishing house. “We’ve seen our social benefits melt in the sun and this is the last straw.”

A broadcaster showed clouds of what its reporter described as tear gas fired on protesters in the western city of Nantes.

The strike forced most long-distance trains, commuter trains and Paris metro lines to shut. Even the Eiffel Tower was closed. Many state schools were shut or had reduced lessons. Grid operator RTE blamed the strike for power outages in Lyon.

📹 | The largest strike in the history of #France continues with participation of teachers, doctors, lawyers and workers

▪️Only two of 16 metro lines in #Paris and one fourth of speed-train lines around the country continue to operate pic.twitter.com/WyCre76fFd

The unions and Mr Macron are each hoping to push the other to back down before Christmas, with the prospect that strikes over the holiday would alienate an increasingly frustrated public.

“Democratic and union opposition to our project is perfectly legitimate. But we have stated clearly what our project was, and my government is totally determined to reform the pensions system and to balance the pension system’s budget,” Prime Minister Edouard Philippe told parliament.

Opponents of the pension reform were buoyed by the departure of government pension reform tsar Jean-Paul Delevoye, who quit on Monday over his failure to declare other jobs.

French workers receive among the world’s most generous state pensions through a system divided into dozens of separate schemes. Mr Macron’s government says privileges for various categories of workers make it unfair, and wants a “points” system to treat contributions from all workers equally. Unions say this amounts to an attack on hard-earned benefits.

“When all the unions say ‘We do not want this reform’, the government should have a rethink,” said Philippe Martinez, head of France’s CGT union, leading a column of demonstrators in Paris’s Republic Square. “They need to open their eyes and unblock their ears.”