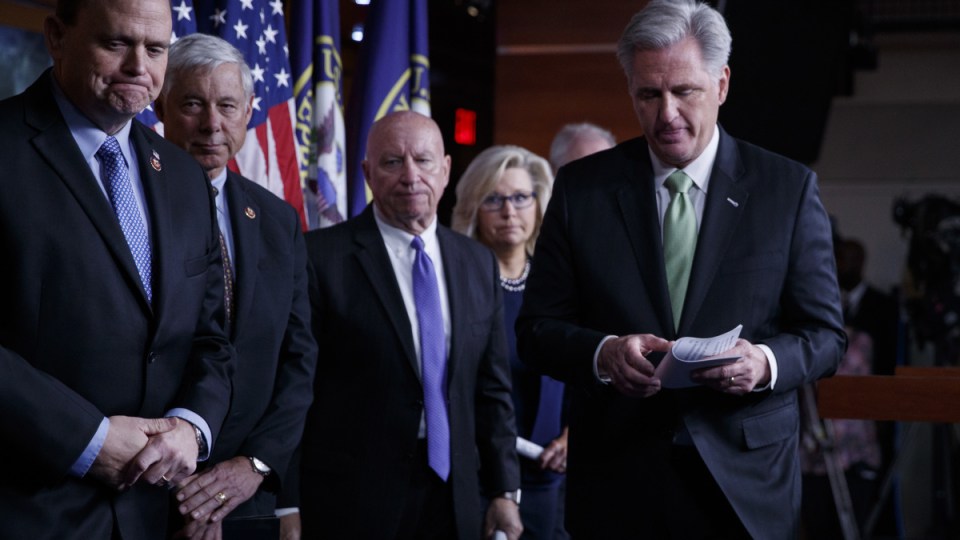 Donald Trump is a step closer to being removed from office after Democrats formally unveiled charges accusing him of abuse of power and obstruction of Congress.

The US President reacted swiftly and angrily to news of the charges, via his favourite medium:

In an ongoing spray on Twitter, he also labelled the charges “ridiculous” and “not true”.

Later, the White House said Mr Trump would not address the charges until their Senate trial phase, continuing to opt not to argue their merits ahead of an expected vote by the Democratic-led House.

“The President will address these false charges in the Senate and expects to be fully exonerated, because he did nothing wrong,” White House press secretary Stephanie Grisham said on Tuesday.

The statement did not make clear how Mr Trump would address the charges. Asked in an interview with Fox News whether the President would testify, Ms Grisham said she did not know.

“I’m not going to get ahead of what he may do but I’m sure we’ll participate in some way, certainly with our counsel,” she said.

“We’re going to be calling on witnesses and we hope that they will participate.”

Later this week, the US House of Representatives Judiciary Committee will vote on whether to approve the charges, which are laid out in two articles of impeachment.

Announcing the charges in front of a portrait of George Washington, judiciary chairman Jerrold Nadler said Mr Trump “endangers our democracy, he endangers our national security”.

“Our next election is at risk…That is why we must act now,” he said.

Democrats hold a 233-197 advantage in the House and are widely expected to pass the articles that detail Mr Trump’s involvement in pressuring Ukraine to investigate Joe Biden, one of his leading political rivals.

The President is accused of withholding $US391 million in aid to Ukraine, on the condition that its newly-elected president would launch an investigation that would help Mr Trump politically.

Nadler just said that I “pressured Ukraine to interfere in our 2020 Election.” Ridiculous, and he knows that is not true. Both the President & Foreign Minister of Ukraine said, many times, that there “WAS NO PRESSURE.” Nadler and the Dems know this, but refuse to acknowledge!

“Using the powers of his high office, President Trump solicited the interference of a foreign government, Ukraine, in the 2020 United States presidential election,” one article reads.

“President Trump engaged in this scheme or course of conduct for corrupt purposes in pursuit of political benefit.”

It says Mr Trump “compromised the national security of the United States” by doing so, and “thus ignored and injured the interests of the Nation”.

The House could vote on the charges as soon as next week. It is almost certain to approve impeachment along partisan lines.

A trial would then likely be held in January in the Senate, which is controlled by the Republicans. However, no Republican in the House or Senate has come out in favour of convicting Mr Trump and thus removing him from office.

Mr Trump tweeted ahead of the announcement that impeaching a president with a record like his would be “sheer Political Madness!”.

The White House and Mr Trump’s political apparatus – which include his re-election campaign and the Republican National Committee – have repeatedly opted to attack the impeachment process instead of debating facts presented by the Democrats.

Calling the process partisan and lacking in fairness, Mr Trump and his allies have sought to paint his Democratic accusers as seeking to undo his 2016 election.

The White House has also refused repeated requests for senior officials to testify and for relevant documents.