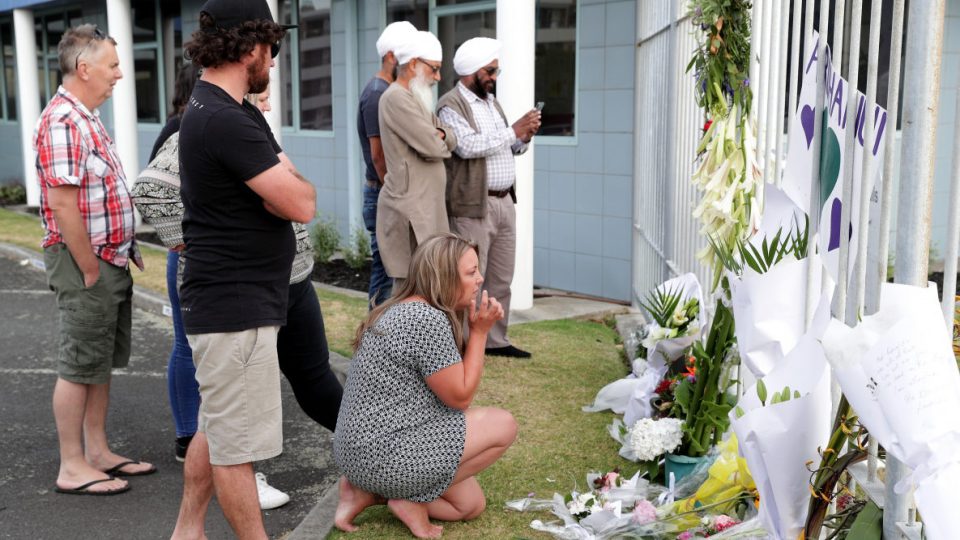 Mourners lay flowers near the site of the cruise ship on which tourists had been travelling before the volcano eruption. Photo: AAP

It comes as an Australian family was provided some relief from their anguish, after an Adelaide mother missing after the eruption was identified as one of the patients taken to hospital.

But the news for Lisa Dallow’s family is bittersweet, with both her husband Gavin and daughter Zoe still unaccounted for.

“We feel for all the families who are going through the same frustration and fear for loved ones as we are,” the Dallow family said in a statement released Wednesday morning.
“All we can do is pray for their safe return.
“Our thoughts also go out to the emergency workers who have done so much for the injured and ask that their safety is paramount.”
Another 12 Australians are recovering in hospital, and 11 Australians were still missing as of 6am Wednesday.

Meanwhile, deputy police commissioner John Tims said police would do all they could to return the bodies from the island to their families. But recovery efforts are being hampered by ash and the threat of further eruptions.

“We have some photos. Certainly, the bodies are covered in ash. So we’re unsure what the state of the bodies will be in,” he said.

“We’re doing everything we possibly can. We know the importance of recovering the bodies to the families and friends so we’re working really hard on that.”

The natural disaster has killed six people, with another eight people presumed dead after they were unable to escape White Island.

Police are asking families not too cling too tightly to the hope people left on the island could be saved, saying they believed “anyone who could have been taken from the island alive was rescued at the time of the evacuation”.

Paramedic Rusty Clarke was on board a helicopter that flew to White Island on a rescue mission shortly after the eruption.

He likened the ashened landscape he saw to that of a nuclear explosion.

“Looking down on it, I would have to describe it as Chernobyl,” he told Radio NZ.

“It was just a complete, absolute whiteout of the area involved.

“It was quite a daunting experience seeing that initial landscape.”
Clarke said first responders often took a mental hit from their efforts.

“It becomes pretty overwhelming emotionally pretty quickly. When you combine the potential for injury and loss of life, it’s quite an ordeal,” he said.

“You can’t help feel empathy and just the sheer magnitude of it.”

Among the 47 people on the island during the blast, there were 24 Australians, nine Americans, five Kiwis, four Germans, two Britons and Chinese and one Malaysian.

The names or conditions of those affected have not been released, although Prime Minister Scott Morrison said three Australians were among the five initially confirmed dead.

News that bodies had been spotted on the island came after the announcement that a badly burned Adelaide woman has been found alive.

Lisa Dallow was found in a Hamilton hospital, where she was being treated for severe burns.

A Sydney family of four and Ms Dallow’s husband Gavin and daughter Zoe are among those still missing.

A Queensland mother and daughter have also been named among the missing as nervous relatives add names to a long list being shared and updated worldwide to track down tourists caught up in the White Island disaster.

Meanwhile, New Zealand Police have clarified that the investigation they have begun is not criminal.

“We have commenced an investigation into the circumstances of the death and injuries on Whakaari/White Island,” a statement released on Tuesday evening read.

“At this time police is investigating the death of the individuals … on behalf of the coroner.

“To correct an earlier statement, it is too early to confirm whether there will also be a criminal investigation.”

The investigation will be carried out in parallel with WorkSafe New Zealand health and safety probe.

Volcanologists at GeoNet, the agency responsible for monitoring and issuing alert levels for all the volcanoes in New Zealand, described the eruption on Monday as “impulsive and short-lived”.

But scientists also said there had been safety concerns and they questioned why tours had been permitted.

There are 31 people still in hospital and more than 20 are in a critical condition.

The tragedy has stretched New Zealand’s medical facilities, filling the nation’s burns units and requiring some survivors to be flown to Australia.

Ministry of Health spokesperson Pete Watson said on Tuesday that it was possible not all of the 31 people in hospital would survive their burns and lung damage from ash and gas.

“Of those injured, 27 of the 31 have suffered greater than 30 per cent total body surface area burns … and many have inhalation burns that requite airways support,” he said.

After a frantic search for information on Monday, police now believe there were 47 people, spread in two groups, on White Island at the time of the blast.

One group was evacuated – thanks in part to a group of helicopters that didn’t hesitate to reach the island – but the other was not.

The delay in returning to White Island means a further agonising wait for families who are waiting for news of missing loved ones.

The Langfords of North Sydney – Anthony (51), Jesse (18), Winona (17) and Kristine (whose age was not given) – and Adelaide’s Gavin Dallow (35) and his 15-year-old daughter Zoe Hosking, were among the Australians named on the Red Cross list of the missing on Tuesday.

Mr Dallow’s father Brian told the ABC the trio were on a day trip to White Island.

“We do know they were on the island. That is definite,” he said.

“At the moment, we think they might be in hospital. We’re not sure. We really don’t know anything.”

Brisbane woman Julie Richards, 47, and her daughter Jessica, 20, are also missing. Their family has told the ABC they were on the cruise liner Ovation of the Seas and were touring the island on Monday.

Ms Richards’s sister Barbara Whitehead said relatives had phoned seven New Zealand hospitals to try to find her sister and niece. Only one had been able to confirm they were not among its patients.

“We rang DFAT and they don’t have any information either.

“We’re just so overwhelmed by everything at the moment, not getting any information. We’re waiting for phone calls from authorities to let us know what’s going on.”

New Zealand Prime Minister Jacinda Ardern, speaking from the nearby town of Whakatane on Tuesday, confirmed six nationalities were among the 13 dead or missing: Australia, New Zealand, US, Britain, China and Malaysia.

She then flew to Wellington, addressing a sombre parliament.

“The scale of this tragedy is devastating,” she said.

“In particular our family in Australia has been heavily impacted … we feel the pull of our bond acutely at this time.”

Ms Ardern said Kiwis “share in your unfathomable grief at this moment in time and in your sorrow”.

Ms Ardern and Australian PM Scott Morrison were in regular contact throughout Tuesday.

A number of people from a visiting cruise ship, the Ovation of the Seas, which originated in Sydney were caught up in the unfolding tragedy.

Family and friends have confirmed local man Hayden Marshall-Inman, a tour guide for White Island Tours, as one of the dead.

Ms Ardern praised quick-thinking pilots and others engaged in the response effort.

“I met with first responders and health professionals this morning. Many of them had not rested or slept,” she said.

“They worked tirelessly and in the most devastating circumstances.

“The toll that the impact of this extraordinary tragedy had on them was obvious.

“There is no limit to New Zealand’s capacity to mobilise, to respond, to care and embrace those impacted by tragedy.

“We are a nation of full of ordinary people that do extraordinary things”.