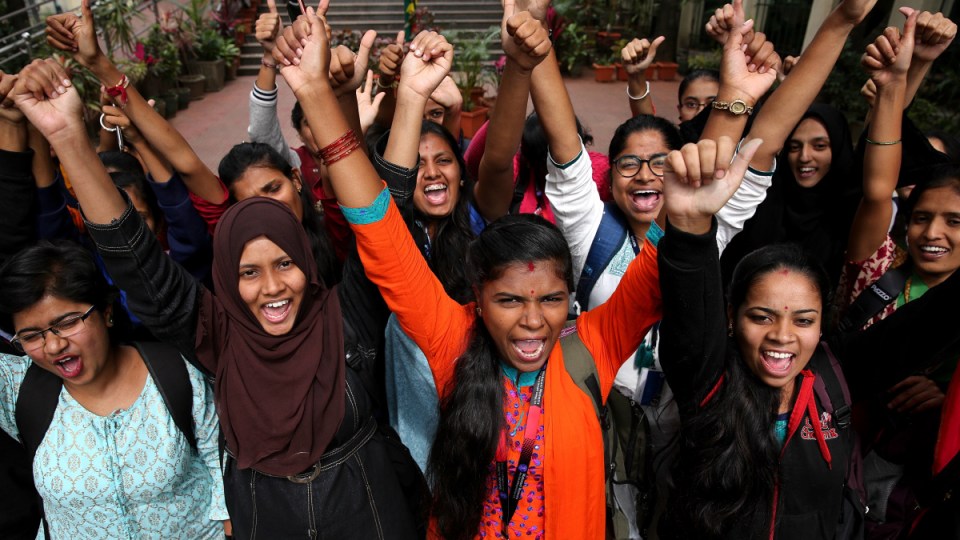 Indian students celebrate after all four men accused in the rape and murder of a Hyderabad vet were killed by police while they were in custody in Bangalore. Photo: AAP

Indian police have shot dead four men who were suspected of raping and killing a 27-year-old veterinarian in the city of Hyderabad, a police official told Reuters, drawing applause from her family and citizens outraged over crimes against women.

The men had been in police custody and were shot near the scene of last week’s crime, said N Prakash Reddy, a deputy commissioner of police in Shamshabad, near Hyderabad.

“In the morning, at around 6-6.30, our persons have come to reconstruct the scene of crime and the accused have tried to snatch their weapons, and there was a cross-fire. In this, all the four accused have died. Two policemen have been injured,” Deputy Commissioner Reddy said.

No details were immediately available about how many police had escorted the four accused and whether they were handcuffed or roped together as is usually the case.

Earlier a local police official had put the time of the deaths at around 3.30 am (1.30pm Friday AEDT). There was no immediate explanation for the discrepancy.

Indian police have frequently been accused of extra-judicial killings, called “encounters”, especially in gangland wars in Mumbai and insurrections in Punjab and Kashmir. Top police officers involved in such killings were called “encounter specialists” and were the subject of several movies.

During the past week, thousands of Indians have protested in several cities following the alleged rape and murder of the veterinarian.

The woman, who cannot be named under Indian law, had left home for an appointment on her motor-scooter and later called her sister to say she had a flat tyre. She said a lorry driver had offered to help and that she was waiting near a toll plaza.

Local media said she was taken behind a line of trucks, raped and asphyxiated and her dead body then set alight on the outskirts of Hyderabad. Four men aged between 20 and 28 years were arrested.

Her family welcomed the news of the killings of the alleged perpetrators.

“It has been 10 days to the day my daughter died. I express my gratitude towards the police & govt for this. My daughter’s soul must be at peace now,” Reuters partner ANI quoted her father as saying.