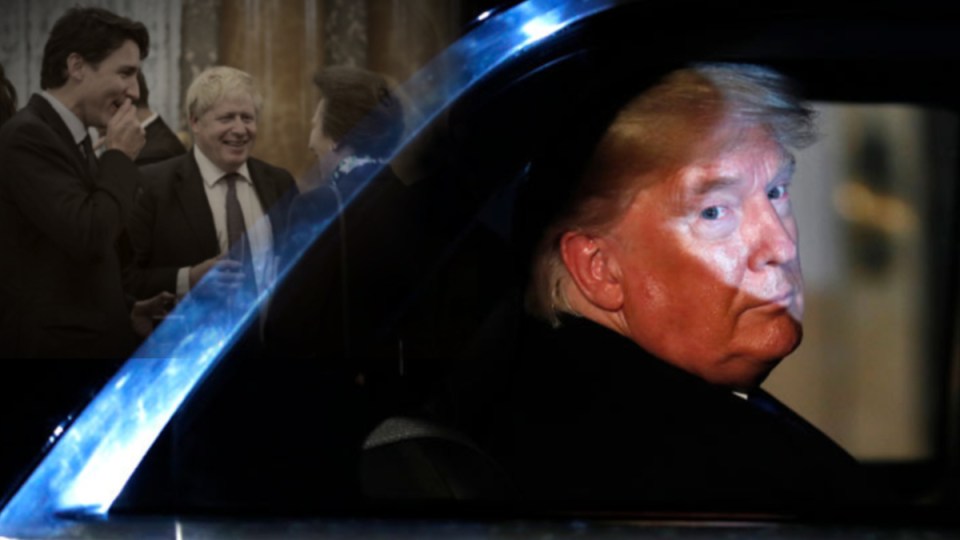 Donald Trump has labelled his Canadian counterpart Justin Trudeau “two-faced” after the PM was caught on camera apparently gossiping about the US President among other world leaders.

Mr Trump left a meeting of North Atlantic Treaty Organisation leaders early on Wednesday after engaging in a spat with the Canadian prime minister – once again highlighting the division among leaders.

It all started when Mr Trudeau was unknowingly filmed at a Buckingham Palace reception saying “he was late because he takes a 40-minute press conference off the top”.

“Honestly, with Trudeau, he’s a nice guy, I find him to be a very nice guy but you know the truth is that I called him out on the fact that he’s not paying 2 per cent and I guess he’s not very happy about it.”

Three psychiatrists released a statement saying Mr Trump poses a “threat to the safety of our nation” and failing to “monitor or to understand the psychological aspects” of impeaching him “could lead to catastrophic outcomes”.

They urged Congress to “take these danger signs seriously and to constrain his destructive impulses”, as they prepared a petition for the House Judiciary Committee with support from at least 350 mental health experts.

Mr Trump cancelled his final media conference at the NATO summit on Wednesday after the hot-mic video was posted online by Canadian broadcaster CBC. It has since been viewed more than five million times.

Mr Trudeau’s office had no immediate comment but amid widespread speculation about who he was mocking, the Canadian PM later confirmed that he had been talking about Mr Trump’s unexpectedly long press conferences.

This is quite the video from the CBC showing Trudeau, Macron, and Johnson discussing what appears to be Trump. pic.twitter.com/QDgIXwEwlk

On Tuesday, Mr Trump spent 53 minutes speaking alongside the NATO Secretary-General, then another 38 minutes giving a media conference with French president Emmanuel Macron.

Mr Trudeau noted the moment that made “his team’s jaws drop” was when Mr Trump surprisingly announced that next year’s Group of Seven summit will take place at Camp David.

“I’ve had a number of good conversations with the president over the course of this day and yesterday,” Mr Trudeau said.

Mr Trudeau was not the only leader to have come out defending controversial remarks, with Mr Macron standing by his comment that NATO was experiencing “brain death”.

While Mr Trump lashed out at Mr Macron for his “very, very nasty statement”, the French counterpart said “it allowed us to raise some crucial debates”, including how to create durable peace in Europe and clarifying who was the enemy.

Meanwhile, British Prime Minister Boris Johnson, who hosted the summit in the midst of an election campaign, urged NATO to remain united.

He said the commitment to NATO was “rock solid,” stressing that the alliance provided “safety in numbers.”

Apart from drama, there were actual items on the agenda