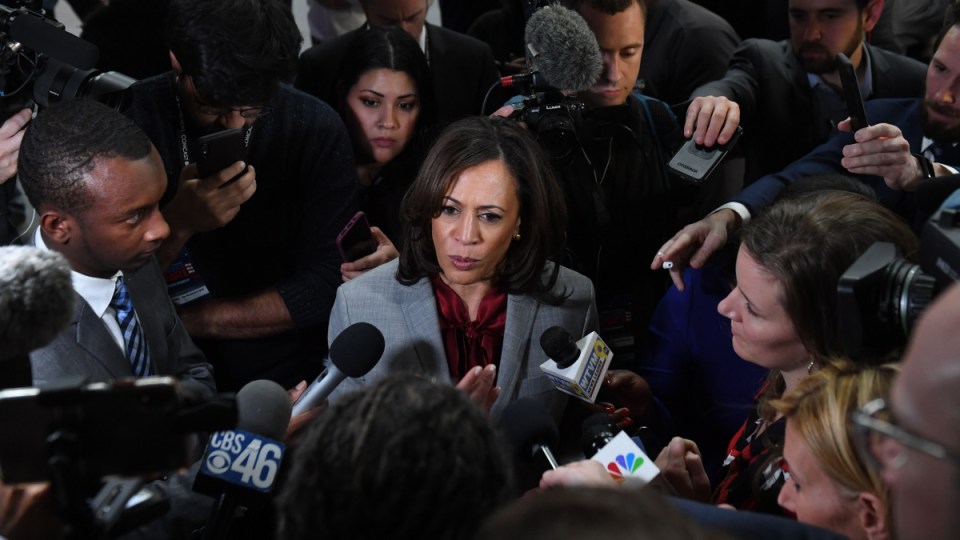 Kamala Harris is ending her presidential bid, a source says, after she failed to gain traction in key states or match her rivals' fundraising hauls. Photo: Getty

First-term US senator Kamala Harris has dropped out of the 2020 presidential campaign after failing to garner support in key states despite an early rise in the polls.

“I’ve taken stock and looked at this from every angle, and over the last few days have come to one of the hardest decisions of my life,” Ms Harris said in an email to supporters.

“My campaign for president simply doesn’t have the financial resources we need to continue.”

Ms Harris held a conference call with staff on Tuesday afternoon (US time) to inform them of her decision, according to sources, who spoke on condition of anonymity.

She subsequently tweeted her withdrawal, announcing she was suspending her campaign.

To my supporters, it is with deep regret—but also with deep gratitude—that I am suspending my campaign today.

But I want to be clear with you: I will keep fighting every day for what this campaign has been about. Justice for the People. All the people.https://t.co/92Hk7DHHbR

Ms Harris, 55, positioned herself as a unifying candidate who could energise the party’s base of young, diverse progressives while also appealing to more moderate voters.

Yet after climbing into double digits in opinion polls following a strong debate performance in June, Ms Harris slid out of the top tier in recent months and lags behind leading candidates’ fundraising hauls.

The departure of the senator from California from the race is the first of a top-tier candidate from the crowded nominating contest.

It has been the honor of my life to be your candidate. We will keep up the fight. pic.twitter.com/RpZhx3PENl

Ms Harris entered the race as an immediate front runner but then struggled to maintain support, which critics said was fuelled by her inability to articulate policy positions and the backlash of an attempt to attack her rival, former vice president Joe Biden.