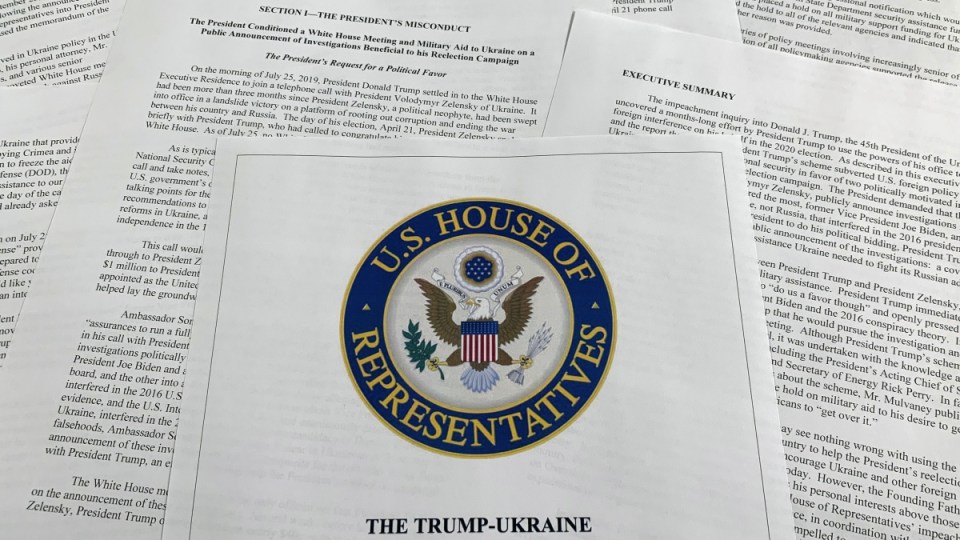 A 300-page landmark report released by US House Democrats has outlined “overwhelming” evidence showing why Donald Trump should be impeached.

The findings, which may very well push Congress toward a debate over whether the 45th president should be ousted from office, has accused Mr Trump of soliciting foreign interference in the 2020 election.

The report, prepared by Democrats on the House intelligence committee, said Mr Trump’s “scheme subverted US foreign policy toward Ukraine and undermined our national security in favour of two politically motivated investigations that would help his presidential re-election campaign”.

After weeks of testimony from current and former Trump administration diplomats, it has become clear that the US president “sought to pressure and induce” Ukrainian president Volodymyr Zelensky to “publicly announce unfounded investigations” for his political benefit, the report said.

In an attempt to ensure the launch of political investigations by Ukraine, Mr Trump “ordered the suspension of $391 million in vital military assistance” to the country “without any legitimate foreign policy, national security, or anti-corruption justification”.

China was also pressured into opening an investigation into his main political rival, former vice president Joe Biden, according to the report.

“Faced with the revelation of his actions, President Trump publicly and repeatedly persisted in urging foreign governments, including Ukraine and China, to investigate his political opponent,” Democrats wrote.

“President Trump ordered and implemented a campaign to conceal his conduct from the public and frustrate and obstruct the House of Representatives’ impeachment inquiry.”

The impeachment inquiry uncovered overwhelming and uncontested evidence that President Trump abused the powers of his office to solicit foreign interference in our election for his own personal, political gain.

No one is above the law.

“At the end of a one-sided sham process, Chairman Schiff and the Democrats utterly failed to produce any evidence of wrongdoing by President Trump,” press secretary Stephanie Grisham said in a statement.

“This report reflects nothing more than their frustrations. Chairman Schiff’s report reads like the ramblings of a basement blogger straining to prove something when there is evidence of nothing.”

The report represents findings from the first phase of the impeachment inquiry.

Republican staffers flipped the script on national security in a separate 123-page report that members of the House made public ahead of the release of the Democrats’ report on the impeachment inquiry.

It defended the president’s dealings with Ukraine and accused Democrats of trying to overturn the results of the 2016 election.

The House intelligence committee is scheduled to meet at 6pm local time on Tuesday (1100 AEDT Wednesday) to vote on the Democrats’ findings.

The matter will then go to the House judiciary committee, which will open its proceedings on Wednesday (local time).

If the full House eventually votes to approve formal impeachment charges, a trial would be held in the Republican-led US Senate, where a two-thirds majority of those present would be required to convict and impeach Mr Trump.