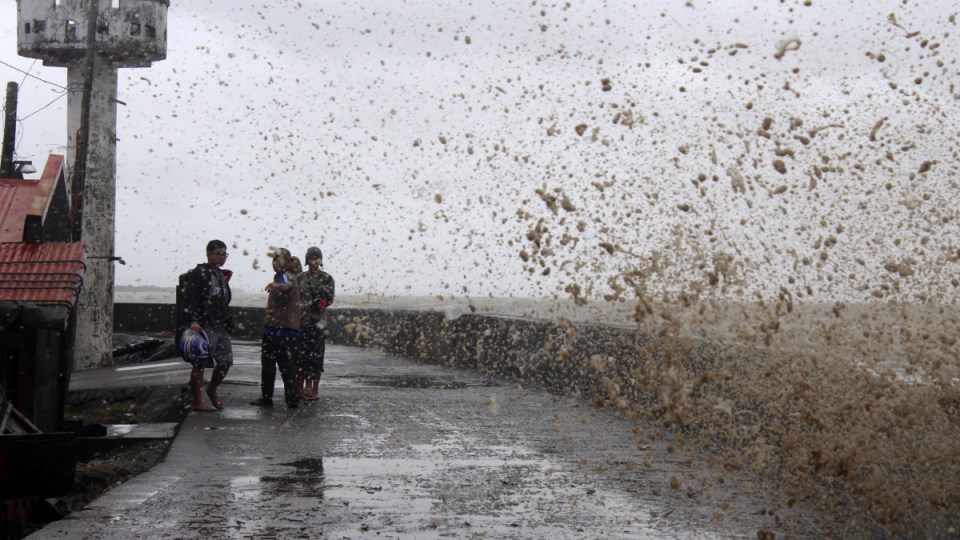 Villagers view waves hitting a dike in the town of Calabanga. Photo: AAP

A massive typhoon has hit the Philippines’ largest and most populous island , with 200,000 residents evacuated amid fears of flooding, storm surges and landslides.

Kammuri’s winds were raging at 215km/h when it made landfall in southeastern Luzon, near the city of Gubat on Tuesday morning (Australian time).

It is forecast to bring an intense burst of torrential rain that can trigger violent mudslides as it moves across the Central Philippines and southern Luzon over the next 24 hours.

Kammuri, known locally as Typhoon Tisoy, has strengthened to a Category 4 hurricane on the Saffir-Simpson Hurricane Scale.

In Northern Samar, 253 families were reported to have been evacuated from the town of Catarman.

Disaster authorities issued mandatory evacuations of coastal communities and low-lying areas prone to flash floods and landslides after the weather bureau warned of storm surges of up to three meters.

Residents living along the typhoon path were urged to take precautionary measures, with about 100,000 people evacuated from the Albay province over the weekend due to the anticipated severity of the storm.

WATCH: Strong gust of wind with heavy rain hits Potong in Lapinig, Northern Samar ahead of the landfall of Typhoon Tisoy on Monday, December 2. #TisoyPH pic.twitter.com/k5hnjRGmOr

“We have to evacuate them and for those who are stubborn, I have directed the police to forcibly bring them to the nearest evacuation camps,” Albay Governor Al Francis Bichara said.

Philippine Airlines Inc and Cebu Air Inc have suspended their domestic flights, while schools remain closed in several provinces and parts of Metro Manila.
There are serious concerns that the storm could affect the 2019 Southeast Asian Games, a biennial regional athletic competition that the Philippines is hosting.
The games, which are held every two years, are expected to feature more than 8000 athletes from 11 participating nations.
But the storm can have a “high humanitarian impact”, the Global Disaster Alert and Coordination System said on its website, putting a population of 8 million at risk.

“We hope there won’t be any damage, but given its (Kammuri’s) strength, we can’t avoid it,” Mr Mark Timbal, spokesman for the national disaster agency, told AFP.

“We have preemptively evacuated people in areas that are in the storm’s direct path.”

Kammuri is the 20th tropical cyclone to hit the Philippines this year, with the country experiencing an average of 20 storms and typhoons annually.