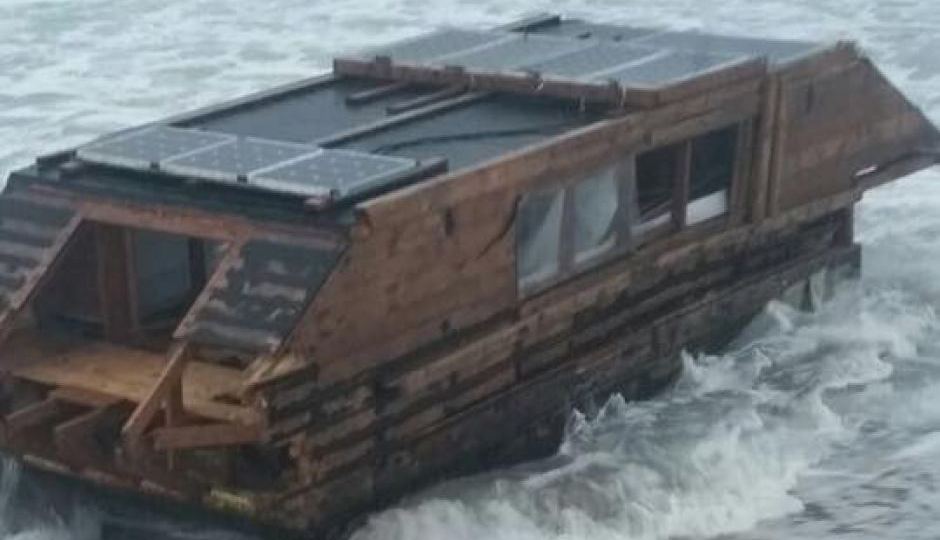 A maritime mystery surrounding a wooden solar-powered houseboat that washed up on an Irish beach three years ago has finally been solved.

Ballyglass Coast Guard was called to collect an “unusual type of vessel” near Cross Beach in County Mayo, in Ireland’s west, in November 2016.

A note written inside the boat in permanent marker identified the owner as Rick Small from Newfoundland, an island in Canada’s most easterly province.

However, Mr Small could not be located and mystery surrounded how the houseboat came to be in Ireland, on the other side of the Atlantic Oceean.

“I stopped to talk with Rick because of the remarkable solar vehicle he was riding,” Sawatsky said on Twitter.

I never expected to hear his connection to an international marine mystery.”

In a human interest piece for CTV News, Mr Small told Sawatsky he had no idea how his boat ended up in Ireland.

He built it hoping to travel from Newfoundland to the Arctic to raise awareness about the disappearing ice in the region.

But when he could not secure the motor he needed to make the journey, he gave the boat away.

The boat was about 10 metres long and, according to Irish news site RTE, was made with driftwood and had sheets of polystyrene stuck to its hull to boost buoyancy.

It had solar panels on the roof and had been waterproofed with tar.

Mr Small was happy the boat weathered the unmanned sea journey, and was surprised it was found some 3000 kilometres away in Ireland.

Steering with plywood and pipe

According to a BBC report from 2016, the boat had been sighted in Conception Bay, Newfoundland in 2015.

Timothy John Ewart said Mr Small told him about plans to sail it across the Atlantic, noting the boat’s motors “barely had enough power to move”.

“The boat’s steering system was only a piece of plywood bolted to a PVC pipe,” Mr Ewart told the BBC.

“When he left our area he was standing on top using a long 2 by 4 [piece of wood] to push his way out because the current was stopping the boat.

“I never saw him again.”

The boat was empty when Irish coast guard officers inspected it, discovering Mr Small’s note scrawled on the interior.

“I, Rick Small, donate this structure to a homeless youth to give them a better life that Newfoundlanders chose not to do,” the message read.

The coast guard hauled the vessel off the shoreline, with photos posted on Facebook sparking local media interest, which grew into global speculation about the owner of the boat.

“Watched Rick Small build this craft at Foxtrap Marina, in Conception Bay South, Newfoundland. He apparently lived in it while he was building it,” Barb Griffiths Hiscock said.

“This boat was tied up in Portugal Cove Newfoundland after being sent out of Foxtrap because it was an eyesore,” Jesse Kearley said.

“He told me he was from British Columbia and was gonna sail his ship from Newfoundland through the Gulf of Alaska. Whatever happened to him after I don’t know.”

According to a RTE report, officials attempted to reach Mr Small about the wreck in accordance with maritime law.

“The guy who built the boat could not be contacted at the time and mystery surrounded his whereabouts,” a post on the Ballyglass Coast Guard Unit Facebook page said.

After 12 months went by with no word, the boat was donated to a local group.

It was restored and is now on display at a community garden in Binghamstown, where it is known as the Solar Arc.