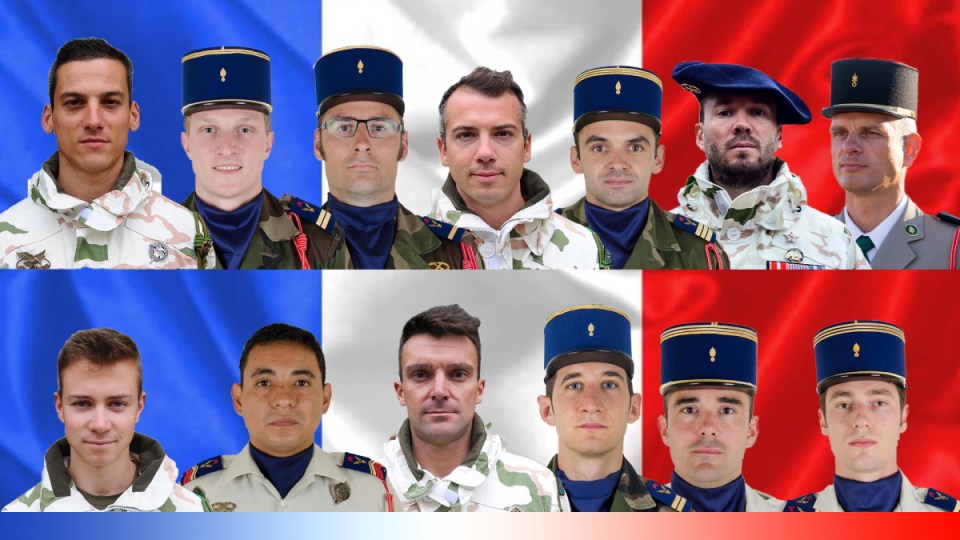 A handout photo showing the 13 French soldiers who were killed. Photo: AAP

It’s been deemed the single biggest loss of French troops since the 1983 Beirut barracks bombing when 58 military personnel were killed.

The “accident” occurred during a “combat mission against jihadists” in Mali,  the French president’s office said, after confirming “with deep sadness” the deaths of all those onboard the aircraft.

“They died for France in the hard fight against terrorism in the Sahel. He sends their families and their loved ones his most sincere condolences, assuring them of the unfailing solidarity of the nation,” the statement by French President Emmanuel Macron’s office read.

The Tiger and Cougar helicopters were flying at low altitude as they provided support to French soldiers on the ground who were battling a group of jihadists traveling across the desert in pickup trucks and on motorcycles, according to military officials.

“They were supporting commandos from the Barkhane force who were engaged with armed terrorists,” the ministry said in a statement.

One of the helicopters had been deployed to “allow for the immediate exfiltration of elements on the ground”, it said.

France’s Armed Forces Minister Florence Parly said the incident occurred while the helicopters were in flight.

The “combat and operational conditions are extremely demanding”, she added.

France has a 4500-strong Barkhane force countering Islamist insurgencies in the Sahel region, where violence by militants linked to al-Qaeda and Islamic State in the sparely-populated area has proliferated in recent years.

France, the former colonial power in the region, intervened in Mali six years ago to drive out Islamist militants who had occupied the north and still use swathes of the country as a launch pad for attacks across the largely desert region.

Paris has since kept troops in the region as part of Barkhane counter-terrorism operations, while western powers have provided funding to a regional force made up of soldiers from Mali, Niger, Burkina Faso, Chad and Mauritania.

France has been frustrated that it is taking the brunt of operations on the ground, although other European countries have provided logistical support, trainers and some special forces.

By reinforcing African forces, Paris sees an eventual exit strategy for what is its biggest foreign deployment, diplomats say.
Monday’s deaths brings the total number of French soldiers killed in the Sahel to 28.