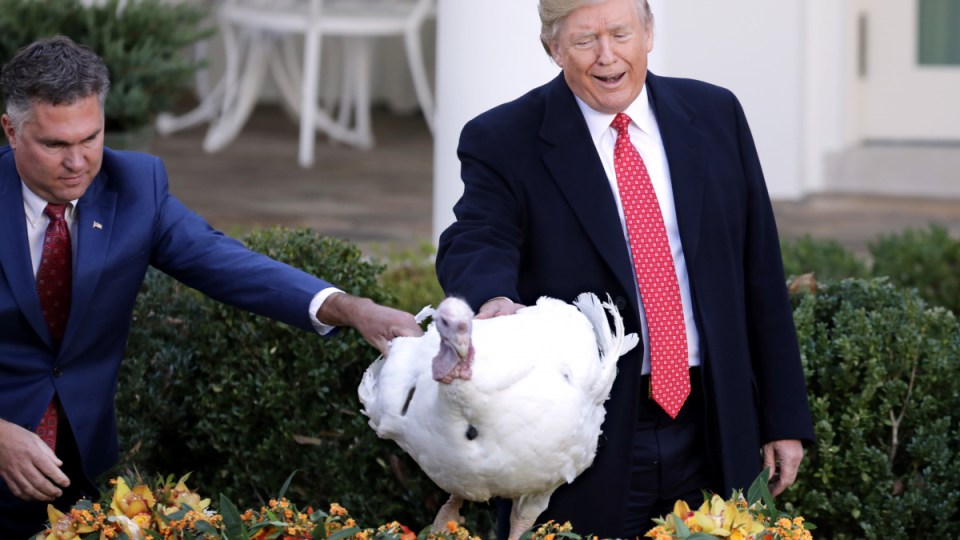 US President Donald Trump has told impeachment jokes at the annual pardoning of Thanksgiving turkeys at the White House. Photo: Getty

US President Donald Trump has used the power of his office to pardon Butter, a 21-kilogram turkey, in a Thanksgiving tradition at the White House – while also cracking jokes about the investigation into his possible impeachment.

Butter and his alternate, Bread, escaped the unpalatable fate of becoming the main course at a Thanksgiving feast.

Instead, they will be sent to a special reserve in Virginia.

Standing at a podium in the Rose Garden on Tuesday (local time), Mr Trump said the birds had been raised to remain calm under “any condition”.

“Which will be very important because they’ve already received subpoenas to appear in Adam Schiff’s basement on Thursday,” he joked.

His wisecrack referred to the House of Representatives intelligence committee chairman, who has led the inquiry into whether Mr Trump should be impeached for pressing Ukraine to investigate a political rival.

Trump humor: Turkeys have been subpoenaed Thursday to appear in “Adam Schiff’s basement,” says Dems have accused him of being “soft on turkey” and that unlike others who have testified, he has met “Bread and Butter” pic.twitter.com/nKEtzZlGWa

“It seems the Democrats are accusing me of being too soft on turkey. But Bread and Butter, I should note, that, unlike previous witnesses, you and I have actually met.”

While other presidents occasionally gave turkeys commutations – starting with Abraham Lincoln – another Republican president, George H. W. Bush, was the first to make sparing one an official act, according to the non-profit Constitution Centre.

Mr Trump’s predecessor, Democrat Barack Obama, is credited with starting the tradition of cracking “dad jokes” at the pardon.