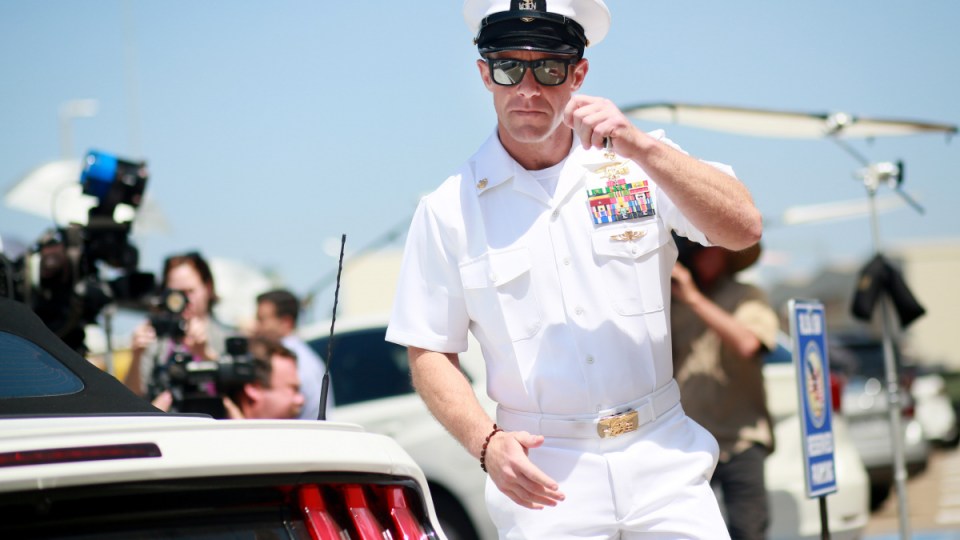 Donald Trump ordered that a Navy SEAL at the centre of a probe into war crimes in Iraq retained his prestigious status, allowing him to retire with honor, the president’s defence secretary has revealed.

A military jury convicted Special Operations Chief Edward Gallagher in July of posing for a photo with the corpse of an ISIS fighter.

The charge carried up to four months in jail, but Mr Trump cleared the 19-year veteran of that conviction and restored his rank on November 15.

I was not pleased with the way that Navy Seal Eddie Gallagher’s trial was handled by the Navy. He was treated very badly but, despite this, was completely exonerated on all major charges. I then restored Eddie’s rank. Likewise, large cost overruns from past administration’s…..

In a shock admission, Mark Esper said Mr Trump instructed him to allow Gallagher to keep his Trident pin designating him as a member of the elite force.

Even when the Navy informed Gallagher last week that he’d face a review board and it was expected that he’d be kicked out of the elite force, Mr Trump intervened.

On Sunday, the president gave a formal order to halt the military’s plans to hold a review board, Mr Esper said.

“I spoke with the president on Sunday. He gave me the order that Eddie Gallagher will retain his Trident pin,” Mr Esper told reporters on Tuesday morning (Australian time).

It came after Navy Secretary Richard Spencer was fired after it was revealed that he had offered the White House a “secret arrangement” on Gallagher’s case.

Mr Esper said he asked Mr Spencer to resign because he had lost “trust and confidence in him regarding his lack of candor” after the Navy chief had sought to cut a side deal that was contrary to what had been agreed.

“We learned that several days prior, Secretary Spencer had proposed a deal whereby if the president allowed the Navy to handle the case, he would guarantee that Eddie Gallagher would be restored to rank, allowed to retain his Trident and permitted to retire,” Mr Esper said.

Mr Spencer’s letter, seen by Reuters, took parting shots at Mr Trump and defended the need to preserve “good order and discipline throughout the ranks”, something Navy officials had believed the peer review board would help ensure.

“The rule of law is what sets us apart from our adversaries,” Mr Spencer wrote.

“Unfortunately it has become apparent that in this respect, I no longer share the same understanding with the Commander in Chief who appointed me.”

The top US general said on Monday that as far as he was concerned the Gallagher case was now closed.

“As far as I’m concerned, it is case closed now and it is time to move on and address the national security of the United States,” Army General Mark Milley, chairman of the Joint Chiefs of Staff told a small group of reporters during a trip to the Middle East.