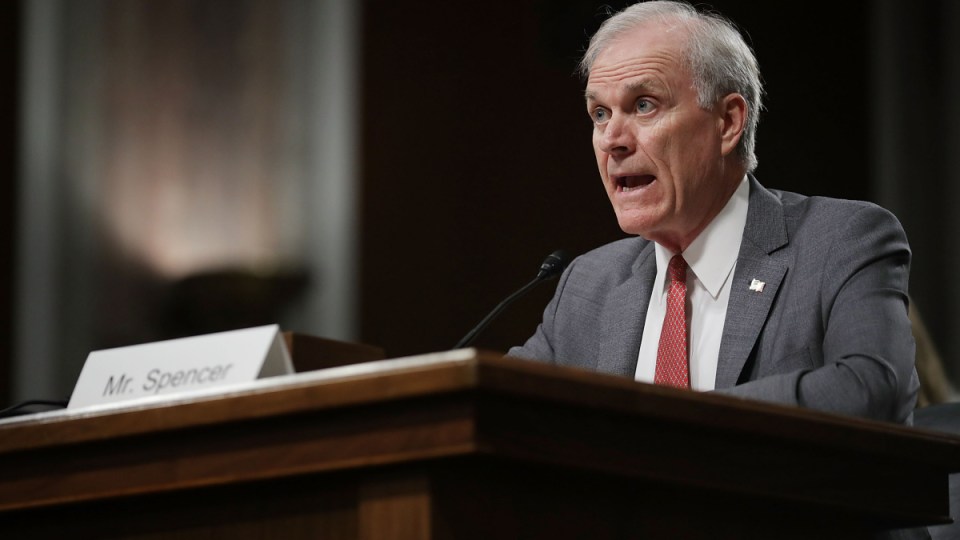 US Navy secretary Richard Spencer has been forced to quit after a dispute with President Donald Trump. Photo: Getty

The head of the US navy has resigned – via an extraordinary letter blasting President Donald Trump for giving him an order in a disciplinary case that he said violated his oath to defend the US Constitution.

Navy secretary Richard Spencer had been asked to quit after a dispute about whether an officer should be dismissed from the elite Seal unit for posing with the corpse of a teenage fighter in Iraq.

In a letter released on Monday (Australian time), Mr Spencer, 65, made it clear he was leaving because he thought Mr Trump’s actions in the case of Special Operations Chief Edward Gallagher were contrary to “good order” in the ranks.

“Unfortunately it has become apparent that … I no longer share the same understanding with the Commander in Chief (Mr Trump), who appointed me, in regards to the key principle of good order and discipline,” Mr Spencer wrote.

“I cannot in good conscience obey an order that I believe violates the sacred oath I took in the presence of my family, my flag and my faith to support and defend the Constitution of the United States.

BREAKING: In extraordinary resignation letter, US Navy Sec. Spencer writes that "I no longer share the same understanding as the Commander in Chief who appointed me, in regards to the key principle of good order and discipline." https://t.co/nV9pJGXJPI pic.twitter.com/u6xX6Ai3xL

The Gallagher case has drawn much public attention in the US because Mr Trump has intervened several times to back the naval officer.

The President had publicly opposed taking away Mr Gallagher’s Trident pin (which designates him as a Navy SEAL), and earlier used his authority to restore the decorated officer’s rank and pay and allow him to retire later this year on a full pension.

Mr Spencer, who was the navy’s highest-ranking civilian, made headlines last week for suggesting a possible split with Mr Trump by saying Mr Gallagher should face a peer review board.

Over the weekend, US Defence Secretary Mark Esper requested Mr Spencer’s resignation, saying he had lost confidence in the navy secretary.

Mr Esper also determined that Mr Gallagher should be allowed to retain his Trident pin – in effect ending the navy’s efforts to carry out a peer review that could have led to his ouster from the elite force.

But Pentagon spokesman Jonathan Hoffman said Mr Spencer also had a private line of communications with the White House.

“Secretary Spencer had previously and privately proposed to the White House – contrary to Spencer’s public position – to restore Gallagher’s rank and allow him to retire with his Trident pin,” Mr Hoffman said.

….contracting procedures were not addressed to my satisfaction. Therefore, Secretary of the Navy Richard Spencer’s services have been terminated by Secretary of Defense Mark Esper. I thank Richard for his service & commitment. Eddie will retire peacefully with all of the…..

Mr Gallagher, 40, was demoted in rank and pay grade after being convicted by a military jury in July of illegally posing for pictures with the corpse of an Islamic State fighter.

On November 15, the White House said in a statement that Mr Trump had restored Mr Gallagher’s rank and had pardoned two army officers accused of war crimes in Afghanistan.

Critics had said such actions would undermine military justice and send a message that battlefield atrocities will be tolerated.

In an appearance on Fox News Channel on Sunday, Mr Gallagher indicated that he hoped to retire next Saturday, “without the board” convening to decide whether he could continue to be a Seal, considered among the most elite of US fighting forces.

Mr Spencer will be replaced as navy secretary by Kenneth Braithwaite, who is currently the US ambassador to Norway.

Top-ranking US Navy official quits, blasting Trump on his way out