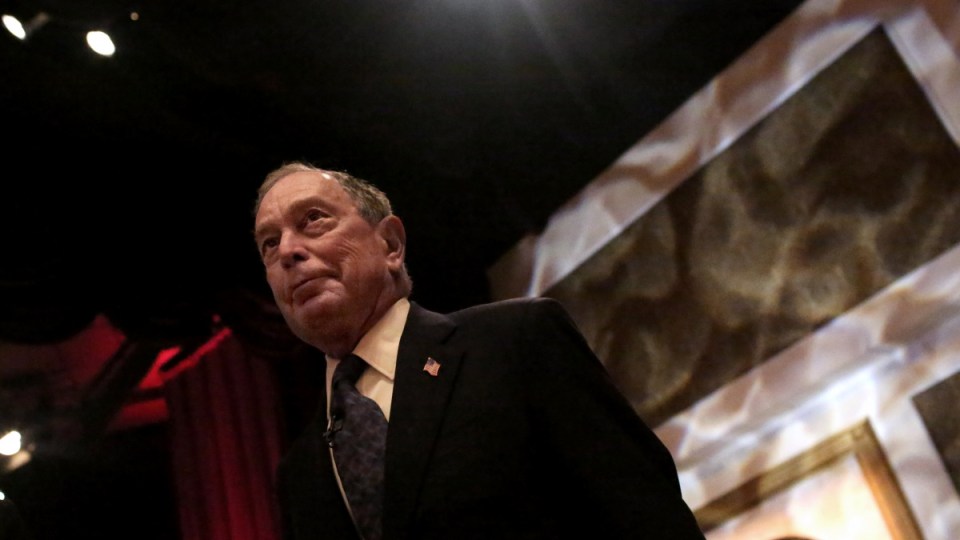 Michael Bloomberg is the second-oldest candidate among the Democrats. Photo: Getty

Billionaire businessman and media mogul Michael Bloomberg has officially announced that he will enter the 2020 US presidential race.

In a statement posted on his website, the former New York City mayor revealed he will be running for the Democratic presidential nomination, despite declaring in March that he would not make a run for the White House.

“If he wins another term in office, we may never recover from the damage,” the 77-year-old wrote.

I believe my unique set of experiences in business, government, and philanthropy will enable me to win and lead.

To coincide with his late-entry presidential bid, Mr Bloomberg launched a minute-long advertisement that included a call for the wealthy to pay more in taxes and “the middle class get their fair share”.

“He could have just been the middle-class kid who made good but Mike Bloomberg became the guy who did good,” the ad’s announcer says in the video which forms part of a $US34 million campaign.

Ranked by Forbes as the eighth-richest American with an estimated worth of $US53.4 billion ($A78.7 billion), Mr Bloomberg will have the advantage of being able to self-finance his campaign and pour millions of dollars into advertising and hiring staff.

He will compete against fellow centrists Joe Biden, the former US vice president, and Pete Buttigieg, the mayor of South Bend, Indiana, and prominent liberal US senators Elizabeth Warren and Bernie Sanders.

Mr Bloomberg had already filed paperwork to be eligible for the Democratic primary in Alabama and four other states with early deadlines for ballot qualification.

Mr Bloomberg has been critical of anti-Wall Street crusader Warren and her plan to tax the super wealthy to pay for programs ranging from universal health care to free college tuition.

He has won allies in the party with his advocacy and philanthropy on climate change and in fighting gun violence, pouring millions into groups pushing for more restrictive gun laws. Mr Bloomberg served as mayor of New York, the largest US city, from 2002 to 2013.

Mr Bloomberg will face significant disadvantages because of his late start, which means he will be playing catch-up with rivals who have been putting together campaign staffs for months ahead of the state-by-state battle for the Democratic nomination.

To counter that, he plans to pursue the unorthodox strategy of skipping the four states with early nominating contests in February, beginning on February 3 in Iowa, and focus primarily on the states that hold primaries and caucuses starting on so-called Super Tuesday on March 3.

No winning presidential contender has ever pursued a similar strategy.

Mr Bloomberg already has come under fire from liberal critics who say he would be the wrong choice for a Democratic Party turning against corporate money in politics and dedicated to ending income inequality in America.

He also is certain to face renewed scrutiny over his record as New York’s mayor and as the head of his own media company for nearly 40 years.