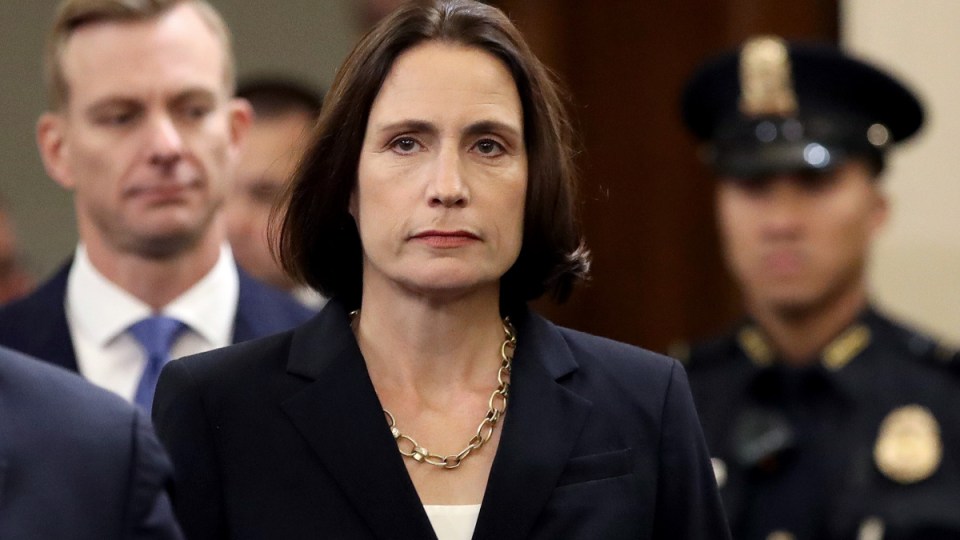 Fiona Hill testified before the House Intelligence Committee in the fifth day of hearings. Photo: Getty

In testimony to the House Intelligence Committee on Thursday, Ms Hill said some members of the panel apparently believed Russian security services did not conduct a campaign against the United States during the 2016 presidential race and perhaps Ukraine did.

Some Republican members of the Democratic-led committee, which is leading the impeachment inquiry, have advanced a discredited conspiracy theory, embraced by Mr Trump and promoted by his allies, that Ukraine, not Russia, interfered in the election.

“This is a fictional narrative … perpetrated and propagated by the Russian security services themselves,” said Ms Hill, who until July served as the National Security Council’s director for European and Russian affairs.

“In the course of this investigation, I would ask that you please not promote politically driven falsehoods that so clearly advance Russian interests,” she said.

Thursday’s hearing marks the fifth and last day of the committee’s public hearings.

The investigation is focused on Mr Trump’s request in a July 25 phone call that Ukrainian President Volodymyr Zelenskiy conduct two investigations that could harm his political adversaries.

The first involved leading Democratic nomination contender for the 2020 presidential election, Joe Biden, and his son Hunter Biden who had served on the board of a Ukrainian gas company.

The second involved the discredited notion of Ukrainian interference in the 2016 election to harm Mr Trump’s candidacy.

The inquiry is also examining whether Mr Trump’s withholding of $US391 million ($A576 million) in security aid to Ukraine, approved by Congress to fight Russia-backed separatists, was meant to pressure Zelenskiy to undertake the investigations.

They brought criminal charges against 12 Russian intelligence officers in the hacking effort, accusing them of covertly monitoring employee computers, planting malicious code and stealing emails and other documents.

David Holmes, a staffer from the US Embassy in Ukraine, also testified on Thursday around a July 26 phone call in which Holmes said he overheard Mr Trump ask a senior US diplomat about the status of the investigations.

Holmes testified his work at the embassy started to become overshadowed in March by the actions of Mr Trump’s personal lawyer, Rudy Giuliani, who was pushing Ukraine to carry out the two probes.

He also said he was “shocked” on July 18 when an official from the White House Office of Management and Budget announced security assistance to Ukraine was being withheld.

Ms Hill warned Russia was gearing up to repeat its election interference activities in 2020.

“We are running out of time to stop them,” she said.

Like a number of career government officials who have already testified, she said she prides herself as a nonpartisan foreign policy expert who has served Republican and Democratic presidents.

She recalled a July 10 meeting between US and Ukrainian officials that then-White House national security adviser John Bolton cut short after Gordon Sondland, US ambassador to the EU, said there was an agreement for an Oval Office visit for Ukraine’s president if his government started certain investigations.