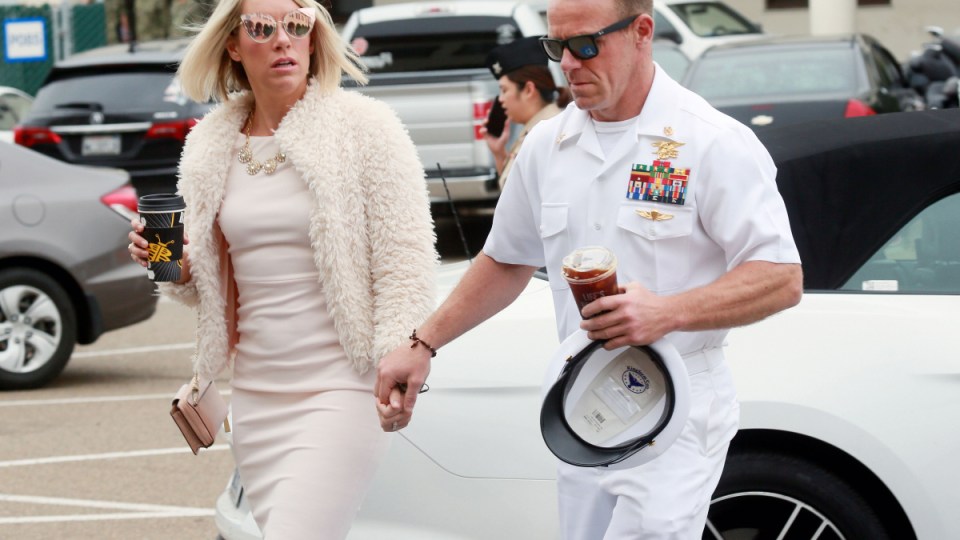 A US Navy SEAL acquitted of murder in a war crimes trial but convicted of posing for pictures with a dead Iraqi detainee faces proceedings to expel him from special forces after President Donald Trump reversed his demotion in rank.

Special Operations Chief Edward Gallagher, 40, received formal notice on Wednesday that a “trident review board” has been convened to weigh his fitness to remain in the SEALs, said Captain Tamara Lawrence, spokeswoman for the US naval special warfare command.

A hearing before the five-member panel, which will recommend whether to take away the trident pin designating him a SEAL, has been set for December 2. A final decision on Gallagher’s status rests with the Navy’s personnel command in Washington, Ms Lawrence said.

She said that three of Gallagher’s commanding officers face separate hearings to review whether they, too, should be removed from the SEALs, an elite Navy special forces corps whose acronym stands for sea, air and land.

Their hearings will examine their “role of accountability” as Gallagher’s direct superiors, Ms Lawrence said.

Gallagher’s civilian lawyer, Timothy Parlatore, confirmed his client was served with papers in San Diego, where he is based, informing him of the upcoming review, convened by Naval Special Warfare commander Rear Admiral Collin Green.

Mr Parlatore said Mr Green’s move to strip Gallagher of his SEAL status marked a direct challenge to Mr Trump’s authority as commander-in-chief and an act of insubordination for which Mr Parlatore said the admiral himself could be court-martialed.

Mr Parlatore contested the move in a complaint filed on Tuesday with the US Defence Department inspector general’s office.

Gallagher’s notice of a trident review board cited the verdict rendered in his court-martial trial in July as evidence calling into question his suitability to continue serving in naval special warfare, the Navy said.

A military jury acquitted him of charges he fired at unarmed civilians and murdered a captured Islamic State fighter by stabbing the wounded prisoner in the neck. But he was found guilty of illegally posing with the detainee’s corpse.

Gallagher, a decorated platoon leader, has otherwise professed his innocence, insisting his accusers were disgruntled, inexperienced subordinates who fabricated allegations against him because they disliked his leadership style and tactics.

The trident review letter states Gallagher’s conduct in taking photos with the body of the detainee he was accused of killing undermined “good order and discipline” and brought “discredit upon the armed forces.”

Gallagher was sentenced to a demotion in rank and pay, from chief petty officer to petty officer first-class, along with a two-month forfeiture of his salary.

Mr Trump last Friday intervened in the case to restore his rank and pay, allowing Gallagher to retire later this year on a full pension. The president also granted pardons to two Army officers separately accused of war crimes in Afghanistan.

Critics said Mr Trump’s moves undermined military justice and sent a message that US battlefield atrocities would be tolerated.

Mr Parlatore, himself a naval officer before becoming a lawyer, said the president exercised his legitimate discretion as commander-in-chief, and that Mr Green’s challenge to Mr Trump’s authority sets a “dangerous” precedent.

“He wants this showdown with the president,” Mr Parlatore said.

“Admiral Green, I think, wants to get fired by the president.”