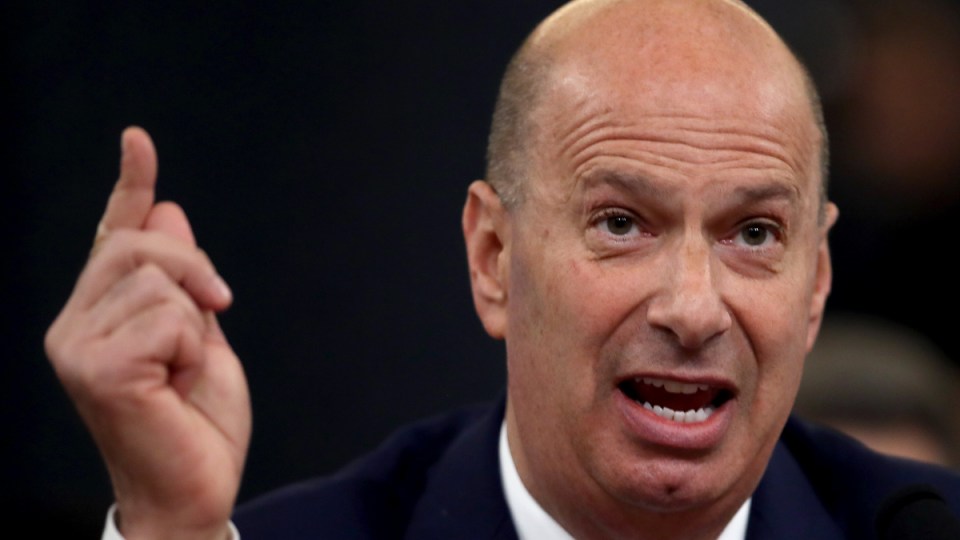 Giving the most explosive testimony of the impeachment inquiry so far, a top US diplomat has confirmed that a White House meeting with the US president was conditional on Ukraine announcing investigations of his rivals.

In a major blow to the president, US ambassador to the European Union Gordon Sondland acknowledged there was a “quid pro quo” between the Trump administration and Ukraine.

Mr Trump quickly sought to distance himself from the revelations, repeating during a snap press conference on the White House lawn “I want nothing” and claiming that he doesn’t personally know Mr Sondland – who had donated $1 million for his inauguration party.

“I have not spoken to him much. This is not a man I know well. Seems like a nice guy though,” he said, whilst reading aloud a statement which appeared to be written in black texta.

In return for an Oval Office visit for president Volodymyr Zelensky, the Ukrainian leader had to declare he was opening a criminal inquiry into suspected Russian interference in the 2016 election, Mr Sondland told the House Intelligence Committee.

He said Mr Trump also wanted Mr Zelensky to announce he was launching an investigation into a gas company linked to the son of former vice-president Joe Biden.

These demands were communicated to Mr Sondland via Trump’s personal lawyer Rudy Giuliani.

“Mr Giuliani was expressing the desires of the president of the United States, and we knew that these investigations were important to the president.” Mr Sondland told the impeachment inquiry on Thursday (Australian time).

Mr Trump’s scheme “kept getting more insidious as [the] timeline went on, and back in July, it was all about just corruption”, he testified.

🚨WOW. Stop what you are doing and WATCH #Sondland’s testimony. It’s utterly DAMNING for @realDonaldTrump, @VP Pence @RudyGiuliani, @SecPompeo and the rest of Trump’s corrupt cabal.

ALL of them *knew* of Trump’s scheme to extort #Ukraine.#Ukrainegate https://t.co/BdPPOVWBa3

He also threw US Secretary of State Mike Pompeo under a bus by revealing that the close Trump ally was aware and “fully supportive” of their efforts on Ukraine, providing a fuller role of the top US diplomat’s role in the affair.

“I know that members of this committee have frequently framed these complicated issues in the form of a simple question: Was there a ‘quid pro quo?’ As I testified previously, with regard to the requested White House call and White House meeting, the answer is yes,” he added.

Essentially the hotel magnate confirmed Mr Trump’s active participation in a controversy that threatens his presidency.

His bombshell testimony has the potential to completely devastate the US president’s persistent fight against impeachment.

If the President abused his power and sought to condition, coerce, extort or bribe an ally into conducting investigations to aid his reelection and did so by withholding official acts,

We must decide: is this conduct compatible with the office of the presidency? pic.twitter.com/8iX15RnmGj

It also places doubt over the future role of Mr Giuliani, the former mayor of New York, who despite having no diplomatic role, pushed hard for the investigations.

The White House did seize on one portion of the testimony from Mr Sondland during a House of Representatives’ impeachment hearing and says it “completely exonerates” President Donald Trump.

“Though much of today’s testimony by Ambassador Sondland was related to his presumptions and beliefs, rather than hard facts, he testified to the fact that President Trump never told him that a White House meeting or the aid to Ukraine was tied to receiving a public statement from (Ukrainian) President (Volodymyr) Zelenskiy,” White House spokeswoman Stephanie Grisham said in a statement.

“Every American needs to take 15 minutes today to watch or read it. He lays out the corruption scheme in clear, easy to understand detail. It was a clear quid pro quo, and the President directed it.”

It’s hard to overhype how extraordinary Sondland’s testimony is. Every American needs to take 15 minutes today to watch or read it.

He lays out the corruption scheme in clear, easy to understand detail.

It was a clear quid pro quo, and the President directed it.

“We now can see the veneer has been torn away,” Mr Schiff told reporters.

According to Former US attorney Preet Bharara, Mr Sondland’s testimony was a “huge inflection point” in this inquiry which “exploded all of the defences you expected” from Republicans and came with “chapter and verse receipts, as they say, saying how many were in the loop” on Ukraine aid being withheld.

Ahead of his request that Mr Zelenskiy carry out the two investigations, Mr Trump froze $US391 million in US security aid approved by Congress to help Ukraine combat Russia-backed separatists in the eastern part of the country.

Democrats have previously accused Mr Trump of using the frozen aid and Mr Zelenskiy’s desire for an Oval Office meeting as leverage to pressure a vulnerable US ally to dig up dirt on political adversaries.