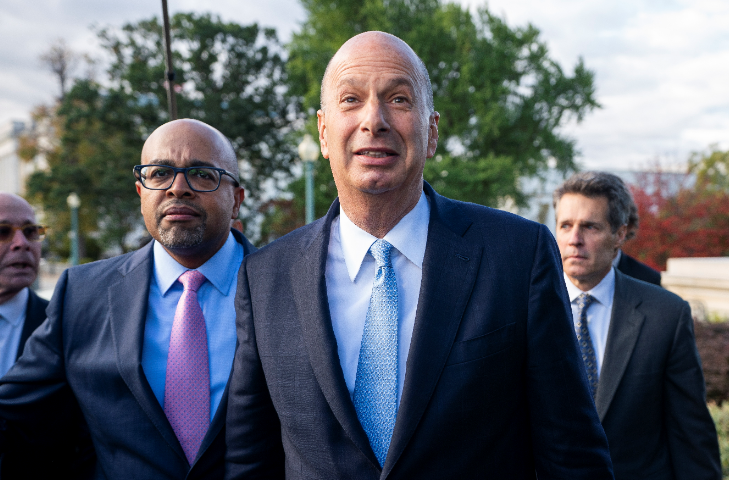 Ambassador Gordon Gordon Sondland (centre) appears to have had a much deeper involvement than he first admitted. Photo: AP

The fresh details come from hundreds of pages of testimony from Tim Morrison, a former top official at the National Security Council and contradict much of the ambassador’s own testimony behind closed doors.

Both Morrison and Sondland are expected to testify publicly before the House next week.

While some, including Trump himself, have begun to question Sondland’s knowledge of events, Morrison told House investigators the ambassador “related to me he was acting – he was discussing these matters with the President”.

But his account also provided new insight on what others have called a shadow diplomacy being run by Trump’s personal lawyer, Rudy Giuliani, often at odds with US national security interests.

As Sondland, Giuliani and others tried to persuade new Ukraine President Volodymyr Zelenskiy to launch the investigations Trump wanted of his Democratic rivals, Morrison said he “tried to stay away”.

Morrison called this the Burisma “bucket” – investigations into the family of Joe Biden and the role of Democrats in the 2016 election. It’s a reference to the gas company in Ukraine where Biden’s son Hunter served on the board.

In particular Morrison described a September 1 meeting Sondland held with a top Zelenskiy aide, Andriy Yermak, on the sidelines of a summit in Warsaw.

Morrison said he witnessed the exchange and that afterward Sondland bounded across the room to tell him what was said.

“My concern was what Gordon was proposing about getting the Ukrainians pulled into our politics,” Morrison said. He added: “It was the first time something like this had been injected as a condition on the release of the assistance.”

Morrison said that at a September 11 meeting at the White House that Trump was persuaded to release the money. Vice President Mike Pence and Senator Rob Portman of Ohio “convinced the President that the aid should be disbursed immediately,” said Morrison, who was briefed about the meeting but did not attend.

“The case was made to the president that it was the appropriate and prudent thing to do.”

Transcripts were also released from the testimony of Jennifer Williams, a special adviser to Pence, that raised new questions about how much Pence knew about the alleged trade-off that’s central to the impeachment inquiry.

Impeachment investigators met for a rare Saturday session with a White House official directly connected to Trump’s block on military aid to Ukraine, the first budget office witness to testify in the historic inquiry.

Mark Sandy, a little-known career official at the Office of Management and Budget, was involved in key meetings about the nearly $US400 million aid package. Sandy’s name had barely come up in previous testimony.

But it did on one particular date: July 25, the day of Trump’s call with Zelenskiy. That day, a legal document with Sandy’s signature directed a freeze of the security funds, according to testimony from Defense Department official Laura Cooper. Investigators had shown her a document as evidence.

Sharpening the arguments, both sides are preparing for an intense lineup of public hearings in the coming week. Americans are deeply split over impeachment, much as they are over the president himself.