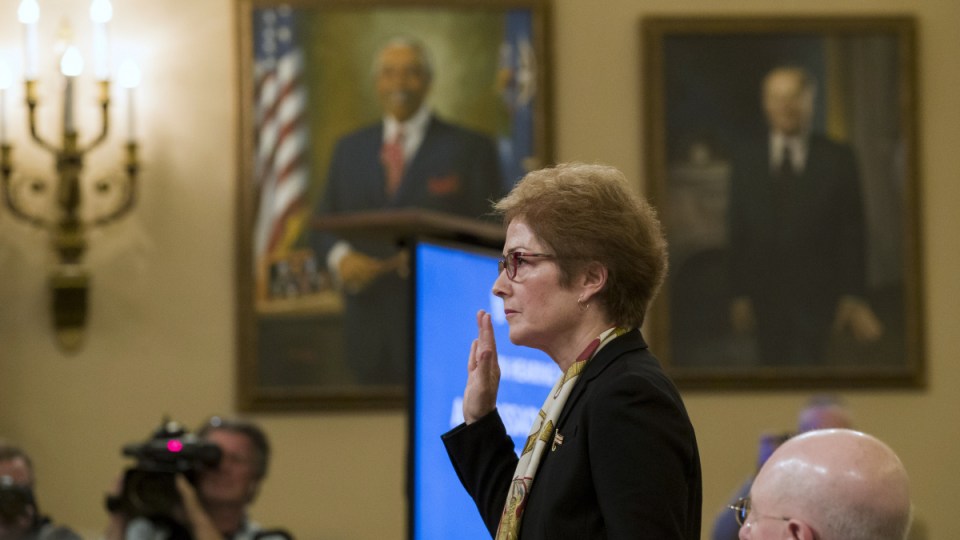 Former Ambassador to Ukraine Marie Yovanovitch is sworn in to testify on day two of public hearings as part of the impeachment inquiry into Donald Trump. Photo: AAP

US President Donald Trump has been accused of intimidating a witness “in real time” for a furious Twitter attack on the former Ukraine ambassador during her public testimony.

Marie Yovanovitch was speaking on day two of public impeachment hearings when Mr Trump deployed tweets denigrating the former US ambasssor to Kiev.

The extraordinary Twitter spray during live testimony has been branded “intimidation” not only of Ms Yovanovitch but future witnesses who may have to take the stand at the impeachment inquiry.

Ms Yovanovitch was sacked in May during what she recounted was a “smear campaign” led by Mr Trump’s personal lawyer, Rudy Giuliani, as he sought to remove her as an obstacle.

She was stripped of her Ukraine post as Mr Giuliani tried to get Ukraine to investigate Mr Trump’s Democratic political rival Joe Biden and son Hunter for their business dealings there, in a so-called quid pro quo deal.

In what has been described as powerful testimony from a strong but quietly spoken woman, Ms Yovanovitch said she was “shocked, appalled, devastated” to learn the president had spoken disparagingly of her in his July 25 phone call with the Ukraine president.

As she gave public testimony, defending her career as a diplomat and corruption fighter in Ukraine, Mr Trump attacked her record in a tweet:

“Everywhere Marie Yovanovitch went turned bad. She started off in Somalia, how did that go?

“Then fast forward to Ukraine, where the new Ukrainian President spoke unfavorably about her in my second phone call with him. It is a U.S. President’s absolute right to appoint ambassadors.”

Everywhere Marie Yovanovitch went turned bad. She started off in Somalia, how did that go? Then fast forward to Ukraine, where the new Ukrainian President spoke unfavorably about her in my second phone call with him. It is a U.S. President’s absolute right to appoint ambassadors.

“And now the president in real time is attacking you. What effect do you think that has on other other witnesses’ willingness to come forward and expose wrongdoing?”

Adam Schiff: “It’s designed to intimidate, is it not?”

Ms Yovanovitch: “I mean I can’t speak about what the president is trying to do but I think the effect is intimidating.”

The impeachment inquiry is focusing on that July 25 phone call in which Mr Trump asked Ukrainian President Volodymyr Zelenskiy to investigate the Bidens.

Democrats are looking into whether Mr Trump abused his power by withholding $US391 million ($573 million) in military aid to Ukraine to obtain a quid pro quo.

During the call Mr Trump also called Ms Yovanovitch “bad news” and added that “she’s going to go through some things”, according to a White House summary of the call.

In his opening statement on day two of the public hearings, Mr Schiff said: “Ambassador Yovanovitch was serving our nation’s interest in fighting corruption in Ukraine, but she was considered an obstacle to the furtherance of the president’s personal and political agenda. For that she was smeared and cast aside.”

Democrat Eric Swalwell said the president “is seeking to destroy” the former ambassador with his tweets “for testifying against him”.

“The president is smearing the anti-corruption ambassador as she testifies against him,” he said.

“This lie is an effort to discredit her and chill others who may have the courage to testify against him. This is open-and-shut consciousness of guilt. He keeps acting guilty.”

I want to be clear here that some of the Fox News contributors are also trying to minimize the impact of the testimony and criticize Schiff. But even Ken Starr is acknowledging that Yovanovitch has been a strong witness and that Trump’s real-time tweet was galactically stupid.

Fox News, which consistently supports Mr Trump, was also critical of the Twitter attack on Friday, with anchors and guests saying Ms Yovanovitch was a credible witness and the tweets were ill-advised.

“There is no way to put lipstick on this porcine situation,” said Ken Starr, a conservative commentator and the special prosecutor in the investigation that led to impeachment charges against Democratic president Bill Clinton in 1998.

However, New York Republican Lee Zeldin said the tweets criticising Ms Yovanovitch during her testimony did not constitute witness intimidation.

“No, I think it’s about the president wanting to ensure that the entire story is getting out there for the American public.

“Ambassador Yovanovitch wouldn’t have even known about the tweet if not for Chairman Schiff choosing to use a partial rendition of the tweet,” he said.

Three more public hearings are scheduled for next week.