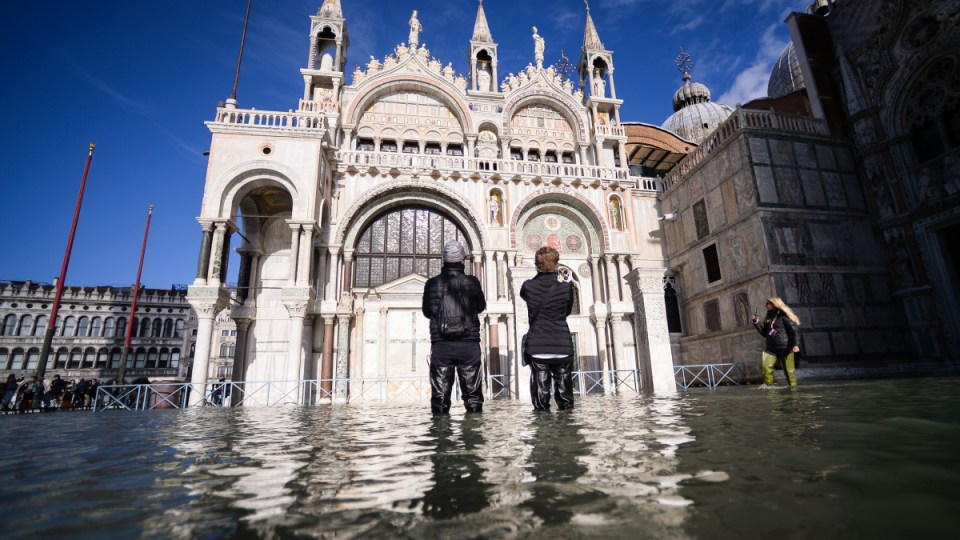 Less than a year ago flooding almost drowned Venice, but not this time. Photo: Getty

Italy is set to declare a state of emergency in flood-ravaged Venice after more than 80 per cent of the historic city became submerged in water, resulting in the worst flooding in half a century.

The “apocalyptic” floods which hit 187cm – just short of the record 194cm set in 1966 – have been described by Italy’s Prime Minister Giuseppe Conte as “a blow to the heart of our country”.

“It hurts to see the city so damaged, its artistic heritage compromised, its business activities on its knees,” Ms Conte said in a Facebook post.

He said the government would “accelerate” funds into the building of structural defences that would shut off the lagoon surrounding the city amid rising sea levels and winter storms.

As part of the emergency measures, Ms Conte said he will allow individuals to claim up to €5,000 and businesses up to €20,000, in compensation.

Saint Mark’s Square was submerged by more than one metre of water, while the adjacent Saint Mark’s Basilica was flooded for the sixth time in 1200 years – but the fourth in the past 20.

“The Basilica is suffering structural damage because the water has risen and so it’s causing irreparable damage,” said Venice Archbishop Francesco Moraglia, warning that ancient mosaics and tiling might have been badly degraded.

“I have never seen anything like it. Venice is a wounded city, but it can’t keep on being wounded every year in the same way,” he said.

A flood barrier was designed in 1984 to protect Venice from the kind of high tides that hit the city on Tuesday but the multibillion-euro project has been plagued by corruption scandals and is still not operative.

Mr Brugnaro said the basilica had suffered “grave damage” but no details were available on the state of its interior, which is famous for its rich mosaics.

There have been two deaths since fierce storms began in the early hours of Tuesday morning, with mayor Luigi Brugnaro saying the situation was “the result of climate change”.

So beautiful and romantic… but there is flooded at now….

An elderly man from Pellestrina, one of the many islands in the Venetian lagoon, died when he was struck by lightning while using an electric water pump, the fire brigade says.

Another man’s body was discovered inside his home.

“The damage will run into hundreds of millions of euros,” Mr Brugnaro warned.

Some tourists appeared to enjoy the drama, with one man filmed swimming across Saint Mark’s Square wearing only shorts on Tuesday evening.

“Venice is on its knees … the art, the basilica, the shops and the homes, a disaster… The city is bracing itself for the next high tide,” regional governor Luca Zaia said on TV.

The tide level fell to 145cm on Wednesday morning but was expected to rise back to 160cm during the day.

The overnight surge triggered several fires, including one at the International Gallery of Modern Art Ca’ Pesaro, with hundreds of calls to the fire brigade.