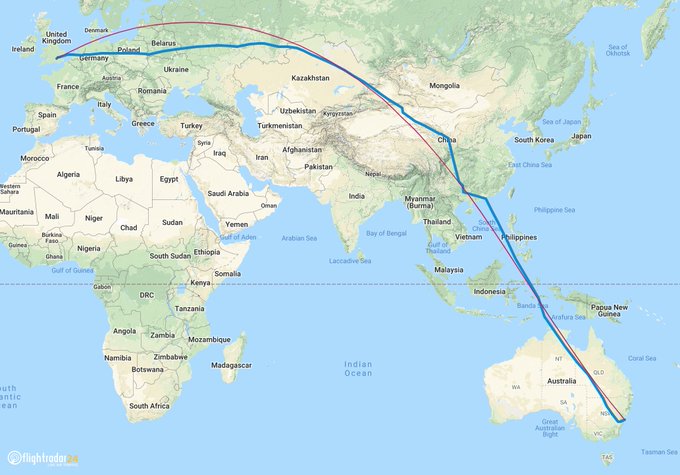 ‘Groundbreaking’. With just 40 passengers and crew on board, an ultra-long Qantas flight from London to Sydney has just touched down successfully in Sydney after a slight delay.

As part of a trial for a potential commercial route, the Boeing 787-9 Dreamliner took off on Thursday morning London time and landed in Sydney 45 minutes behind schedule at 12:30pm on Friday (AEDT).

The test flight, as part of Project Sunrise, carried a total of 40 people (Qantas had originally said 62 passengers and crew) to the other side of the world in 19-and-a-half hours. It comes as the Australian airline celebrates 100 years of service.

Commanded by Captain Helen Trenerry, Qantas set up a live-stream from the cockpit to follow the 17,750 journey across the globe.

Carrying 100,000kg of fuel (tanks not quite full) with a takeoff weight of 231,920 kg, the flight plan flight plan had a massive 49 waypoints between London and Sydney.

We've taken off. This is the voice of Capt Helen Trenerry. Listen to her PA. @flightradar24 #QF7879 #QFnonstop pic.twitter.com/Pxf5h9gaxC

A Dreamliner can usually carry up to 300 people, but it is currently impossible to fly a plane at full capacity of both passengers and cargo from London to Sydney without refuelling.

Those on board were mostly Qantas employees fitted with monitors to track sleep patterns, food and drink intake, lighting and physical movement.

It was the second aircraft to fly the route non-stop, with the first touching down in August 1989. The Boeing 747-400 which undertook the journey carried no passengers, only crew, and is now at an Australian museum.

Qantas flew a Dreamliner non-stop from New York to Sydney last month, although the route is around 1600km shorter.

In announcing he was a passenger before the flight left the UK, aviation blogger Sam Chui said he was “overcoming the final frontier of aviation”.

At one point over the snow-capped mountains of Russia, FlightRadar24 said they were “tracking ahead of the flight plan”.

“Many well wishes from ATC and other aircraft. Lots of snow in Russia.

“Supper meal service now complete and the cabin is now in darkness for sleeping. Breakfast in 8 hours.”

Just before 11am on Friday, “Longreach” was tracking over its namesake in outback Queensland.

#QF7879 is operated by our newest Dreamliner, named ‘Longreach’. Right now, the flight path is taking the aircraft past its namesake – the outback Queensland town where Qantas had its origins, 99 years ago. #QFnonstop @flightradar24 pic.twitter.com/Dm5hcmqY74

It comes as the Australian national carrier celebrates 100 years of service.

Among those at Sydney Airport to greet QF7879 were Prime Minister Scott Morrison and Opposition Leader Anthony Albanese, as well as Qantas chief executive Alan Joyce and chairman Richard Goyder.