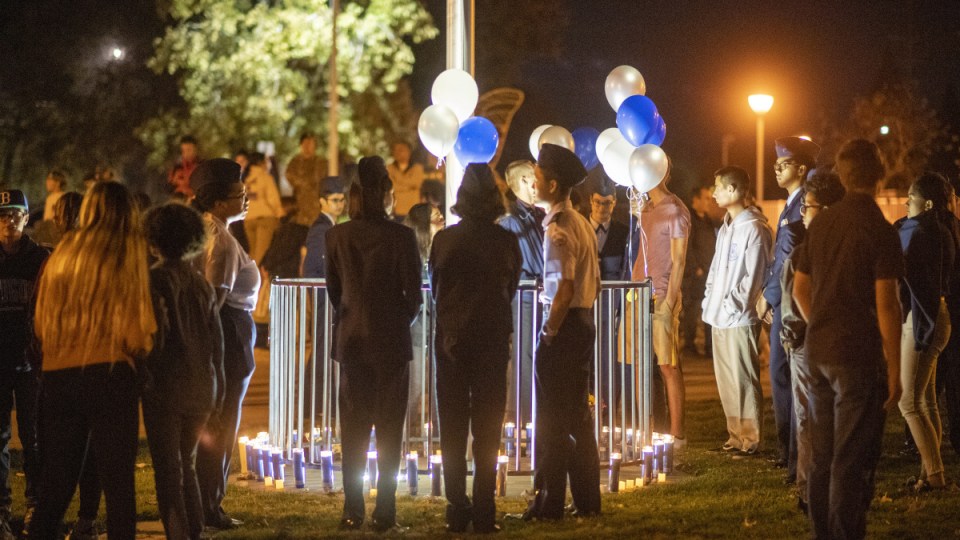 A vigil held on Friday night in Central Park, Santa Clarita, after another mass school shooting in the US. Photo: Getty

A Californian high school student has died from self-inflicted wounds after opening fire at his school on his 16th birthday, killing two classmates and leaving no clue or motive as to what lead to the attack.

Nathaniel Tennosuke Berhow fired the final bullet into his own head in the plaza of the Saugus High School in the Los Angeles suburb of Santa Clarita about 7.30am on Thursday local time.

He died at 3.32 pm on Friday local time at a hospital with his mother present.

Captain Kent Wegener of the Los Angeles County Sheriff’s Department’s homicide unit said that after more than 40 interviews and evaluation of evidence, no motive had been established. He said no manifesto, diary or suicide note had been found.

“It still remains a mystery why,” Sheriff Alex Villanueva told a press conference.

The teen stood by himself, did not appear to interact with anyone and then walked to the centre of the quadrangle.The shooting took just 16 seconds and was recorded on security video.

“As far as we know the actual targets were at random,” Sheriff Villanueva said, adding his actions were “out of the blue” to everyone.

“It wasn’t a spur-of-the-moment act.”

The origin of the gun was being investigated.

Three off-duty law enforcement officers were first on the scene and treated some of the wounded until paramedics arrived.

The dead were identified as 15-year-old Gracie Anne Muehlberger and 14-year-old Dominic Blackwell.

In a statement, Bryan and Cindy Muehlberger said they shared the news of their daughter’s death with “unexplainable brokenness”.

They described her as their “Cinderella, the daughter we always dreamed to have”, and said her two brothers were heartbroken.

Berhow, who neighbours and friends described as “naturally smart” and “quiet”, posted a message to the Instagram account believed to belong to him.

“Saugus, have fun at school tomorrow”.

He killed two fellow students aged 14 and 16, wounding three others before turning the firearm, a .45 calibre handgun, on himself.

Sheriff Villenueva told a news conference on Friday after the attack school shootings were a “reality” that affects the entire country.

“I hate to have Saugus be added to the names of Columbine, Parkland, Sandy Hook, but it’s a reality that affects us all throughout the nation.”

This brings the number of mass shootings to 366 in the US this year alone, with 662 teenagers aged 12 to 17 killed.

Students recounted the moments they heard gunshots from inside the school grounds, some believing it was a pre-school band practice session or balloon popping.

Shauna Orandi, 16, said she heard four gunshots that she initially mistook as instruments from a band class.

“My worst nightmare actually came true,” she said later as she left a nearby park with her father. “This is it. I’m gonna die.”

Shooter a victim of family violence

Without a motive or relationship established between the gunman and the students, Los Angeles County Sheriff’s Department records published in a local newspaper show his father was arrested in June 2015 on suspicion of attempted battery on his wife. It’s unclear how the case was resolved.

Brooke Risley, a Saugus High student, said she had known the boy since elementary school and sometimes studied with him on engineering projects.

Risley described the boy as somewhat introverted, though open with his close friends, and “naturally smart.”

She said he wasn’t bullied, had a girlfriend and had been an active member of a local Boy Scout troop.

“A quiet, to-himself kid,” said Ryan McCracken, a 20-year-old next-door neighbour. When McCracken was younger, he said they played together, sometimes in boy’s backyard tree house.

Doctors said Friday morning local time that two girls ages 14 and 15, who were both shot in the torso, were doing well and should be released from the hospital over the weekend.

A 14-year-old boy was treated and released from another hospital.