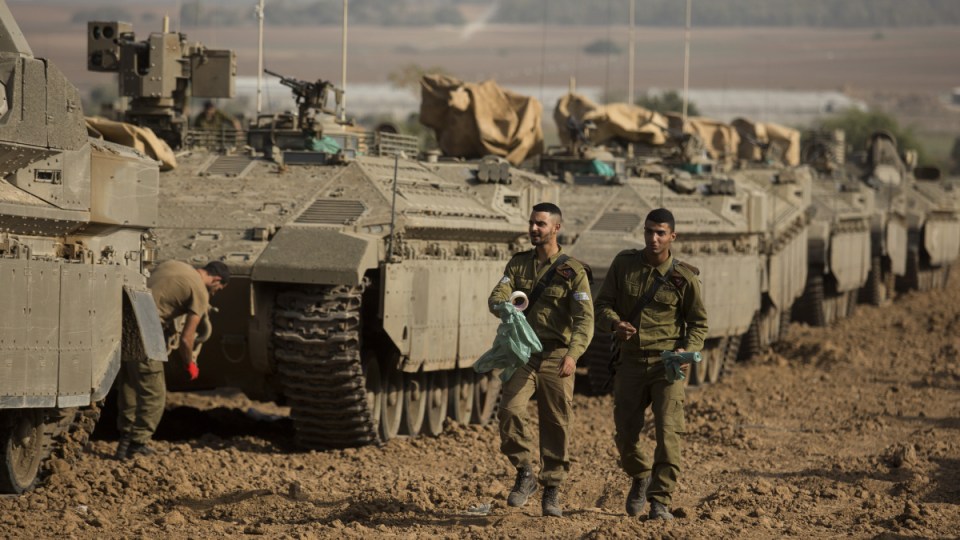 Israeli soldiers near the border with Gaza, where tensions have risen since the killing of Baha Abu Al-Ata. Photo: Getty

Palestinian militant group Islamic Jihad has offered terms for an Egyptian-mediated ceasefire with Israel, saying if these are not met it is prepared to keep up cross-border rocket salvoes indefinitely despite a mounting Gaza death toll.

A surge in fighting around the Palestinian enclave was sparked on Tuesday when Israel killed Islamic Jihad’s top Gaza field commander in an air strike, accusing him of masterminding a spree of recent attacks and planning more soon.

As Islamic Jihad fighters responded with hundreds of rocket launches that reached as far as Tel Aviv and paralysed parts of Israel, the Israeli military pressed the aerial barrage on the Gaza Strip.

Medics say 26 Palestinians, including at least 14 gunmen and six civilians, have been killed. Dozens have been injured on both sides.

In his first public comments on the fighting, Islamic Jihad leader Zeyad al-Nakhala said a truce could be agreed immediately if Israel accepted the Iranian-backed faction’s terms.

These included Israel ending targeted killings of militants, its sometimes lethal response to weekly Gaza protests and steps to ease its blockade on the coastal Palestinian enclave, al-Nakhala, who is based in Beirut, told Al-Mayadeen TV.

Al-Nakhala said he expected to hear Israel’s response via Cairo within hours. Should a truce not be agreed, he said, “the (Islamic Jihad armed wing) Jerusalem Brigades is able to manage the battle, and for a long time”.

Israel signalled openness only to a quid-pro-quo restraint.

“Quiet will be answered with quiet,” Israel’s Army Radio quoted an unnamed Israeli government official as saying. “Islamic Jihad wants a ceasefire, and it is thus trying to create a false impression of achievements.”

Israel had previously said it sought no escalation in Gaza. Unlike with past rounds of fighting, when Israel held Gaza’s dominant Hamas faction responsible for any cross-border attacks, this time Hamas has been spared Israeli retaliation.

Hamas, in turn, has voiced solidarity with Islamic Jihad but has not claimed responsibility for any of the rocket launches.

The Israeli military said it had “eliminated” at least 20 Gaza fighters since Tuesday in attacks on targets that included a rocket warhead manufacturing facility, an Islamic Jihad headquarters and a weapons storage site.

Despite their enmity, Hamas and Israel have managed to defuse previous confrontations and avoid a full-scale conflict for the past five years, following three wars from 2008-2014.

The rocket salvoes from Gaza sent Israelis rushing to shelters in towns near the Gaza border and deeper in the country, with air raid sirens going off as far north as Tel Aviv and rockets striking Israeli highways and towns.

“We don’t want escalation, but we are responding to every attack against us with a very sharp attack and response. Islamic Jihad best understand that now rather than when it’s too late for it,” Israeli Prime Minister Benjamin Netanyahu said earlier.