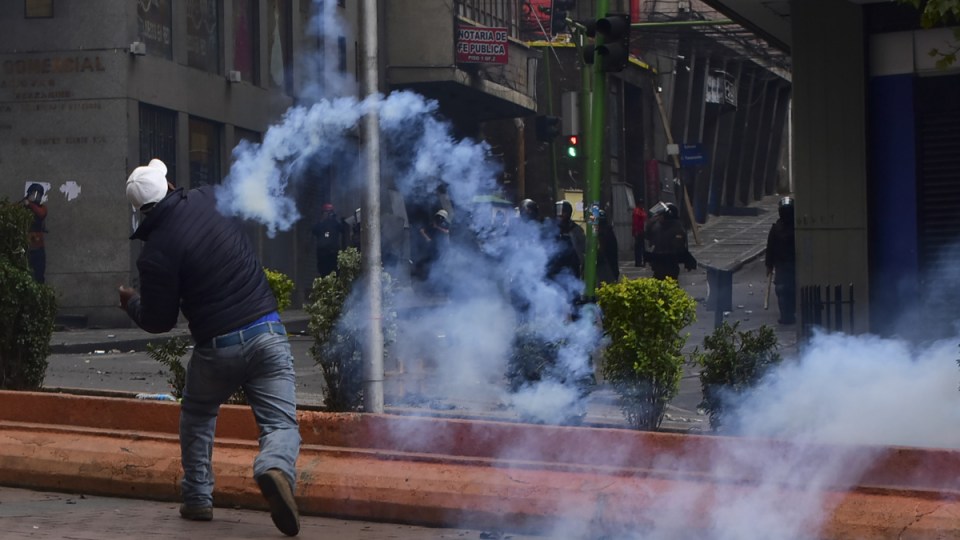 Bolivian security forces have clashed on the streets of La Paz with supporters of unseated president Evo Morales, firing tear gas to clear crowds who hurled rocks and set fires in a test to Bolivia’s new interim leader.

With Mr Morales in Mexico City after he resigned under pressure on Sunday (local time), crowds of his supporters carrying flags and banners marched in the capital while his party’s lawmakers looked to unseat Jeanine Anez, the Senate vice-president who stepped in on Tuesday (local time).

Ms Anez, 52, said she wanted elections as soon as possible and denied a coup had taken place against leftist leader and newly-exiled Mr Morales, who hinted he could return to Bolivia.

Mr Morales’ 14-year socialist rule ended in violent protests and recriminations after rising pressure over accusations of vote rigging in the October 20 election. But he struck a defiant tone from Mexico where he is seeking asylum.

“If my people ask, we’re ready to go back. We’ll return sooner or later … to pacify Bolivia,” he said at a news conference in Mexico City.

Ms Anez, who has already overhauled some of Mr Morales’ policies, faces a challenge from lawmakers of Mr Morales’ Movement for Socialism (MAS) party, who have a majority in parliament and have threatened a rival session to nullify her presidency.

Ms Anez was forced to declare herself president after legislators from the MAS party boycotted her swearing in. She instead invoked a constitutional clause as the next person in line for succeeding the president.

But Mr Morales’ loyalists say that move was illegal because Congress did not formally accept Mr Morales’ resignation, and tried to hold a counter meeting on Wednesday.

Ms Salvatierra had resigned publicly but said on Wednesday that her resignation letter had not been formally accepted. “I’m still a senator,” Ms Salvatierra told journalists.

Police also fired tear gas in the city centre to break up crowds after thousands of Mr Morales supporters marched into La Paz from nearby El Alto.

Bolivia’s Attorney General says there have been at least seven fatalities in the 23 days of conflict, including in the cities of La Paz, Santa Cruz and Cochabamba.

Others cheered Ms Anez taking over the interim role and hoped it would bring stability after weeks of protests.

“It seems she is going to act in a fair way and will get us out of this mess,” Jose Clarens said on his way to a market.

Ms Anez said she planned to call elections “in the shortest possible time.”

But Mr Morales promised to keep up the political fight. He attacked the OAS audit of the election and later said the “coup” was a US-led political conspiracy.